The Etheria Film Festival delivers a stunning collection of shorts showcasing outstanding female filmmaking talent, and you can watch them all on Shudder.

Etheria is the world’s most respected competition showcase of new sci-fi, fantasy, action, thriller and horror films directed by women. The annual Etheria Film Night Hollywood Showcase was set to take place at the Egyptian Theater in Hollwood, California, this month. But then COVID happened. So, the event organizers did the next best thing. They partnered with Shudder to bring horror fans a streaming showcase of the world’s best and most promising emerging female filmmaking talent.

When Etheria was founded in 2014, Co-Founder and Program Director Heidi Honeycutt said:

“It’s time to expand our concept of what it means to be a genre film director. I am going to deliberately seek out films that make people think, scream, feel, and rethink what it means to be a ‘female director.’ I want to see the number of women making great genre films go up; I want women to feel an unprecedented sense of equality in the film industry, and I think this is one small way we can help make that happen.” 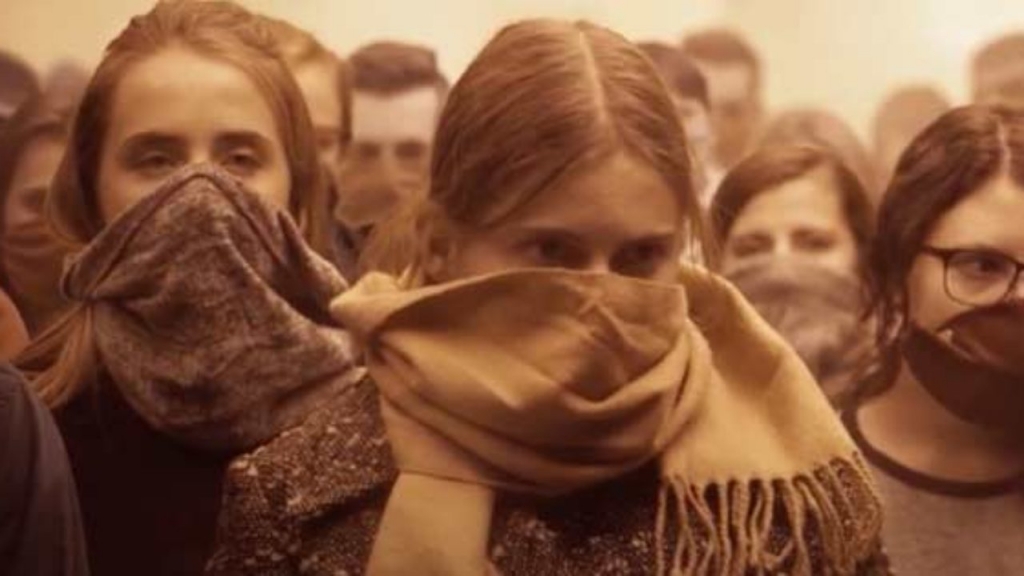 With the current state of women in horror, we’ve never needed these amazingly talented and inspiring female voices more.

And while it’s a shame to see festivals like Etheria having to cancel in person events, I’m so happy more genre fans now have a chance to see and support these incredible films.

The online showcase now showing on Shudder consists of nine short films and over two hours of mind-blowing genre entertainment. While you’ll likely find a film or two that shines brighter than the rest, the entire lineup is impressively strong and diverse enough to appeal to every type of horror fan. What follows is a brief synopsis of the nine films in the showcase, along with our mini review of each one.

All Shudder subscribers will be able to check out these nine horror shorts — which range from dark comedy, to blood-soaked slasher homage, to homoerotic thriller, to unsettling Black Mirror-like tales — through July 20th.

Kerry is at a sleepover with the socially awkward, mysteriously orphaned heiress Katie. Friendship–in a society that grows ever isolating–is explored as Kerry learns the hard way that Katie always gets what she wants.

When a disturbed waffle maker heiress, Kerry (the wonderful Kerry Barker), uses her wealth to buy a best friend — or at least a woman, Katie (Katie Marovich), willing to play the part of a bestie for a hefty fee — we soon the learn the lengths some people will go to feel less alone.

Things quickly go from mildly awkward to extremely disturbing when Kerry insists Katie stay for a sleepover. I loved this wickedly funny and delightfully sinister tale, with a very satisfying twist, about loneliness and our desire to connect at all costs — even if those connections aren’t real.

Sometimes doing nothing can be the worst move of all.

Maggie May is an incredibly intense, hard to watch story about the horrors of complacency, apathy, and inaction. A morality tale for the ages, it feels especially poignant in today’s climate, as we face a cultural sea change that demands we hold people as accountable for what they don’t do as what they do.

Lulu McClatchy is wonderful as the titular character, a woman you will love to despise. After their mother’s death, she does nothing to help comfort her sister Sam (Katrina Mathers) or help get her mother’s affairs in order. As frustrating as that is, Sam soon learns the terrible depth of Maggie May’s desire to disconnect from reality and avoid confrontation at all cost.

With superb direction and a truly terrifying script, there’s a good reason this film won the 2020 Etheria Jury Award.

Young witch Lily prepares a magic pumpkin spice latte that forces Brian to relive the physical experience of their terrible sex from the previous night–but from Lily’s perspective.

One of my personal favorites, Basic Witch is a very funny but quite effective story about the impact of sexual violation and disrespect (intentional or not) for women. It addresses the issue of consent and what it really means, while showing how often men fail to even realize their wrongdoing due to male privilege and the systemic victimization of women that makes bad behavior feel totally normal.

While that sounds super heavy, this short manages to broach its serious and uncomfortable subject matter with charm, compassion, and sweetness — making it utterly approachable and all the more lingering.

A pansexual, polyamorous trio kidnap a ‘pray-the-gay-away’ evangelical conversion therapist and torture him until he sees the light.

The longest entry in the collection, clocking in at 20 minutes, Conversion Therapist is a brutal reflection on hate and hypocrisy, in the context of religious fever and the dehumanization of an entire group of people in the name of God.

While there’s plenty of effective gore, this story makes its biggest mark by the way it explores trauma and the violence of hate. It’s also got a damn satisfying ending.

In a polluted future, 20-year-old drummer Olly wants only one thing: to get inside the dome, where the air is clean and the best musicians live. In order to get in, he must pass a series of absurd tests.

In a post-apocalyptic world that feels uncomfortably close to our own, only the best and the brightest are given a chance to thrive — while everyone else must endure the hardships of polluted air and a dying planet. The only way out of a bleak existence is to gain entrance to the Dome, a sealed off biosphere full of clean air, lush vegetation, and comfortable living. The Dome is also a mecca of art and culture, and it’s this that beckons our hero and aspiring drummer, Olly, to apply for Dome citizenship. He dreams of hobnobbing with the world’s greatest musicians.

But before that can happen, he must pass a series of grueling tests that attempt to measure his mental health and acuity and assess his ability to positively contribute to the elite society. While everyone is welcome to apply, it quickly becomes clear that only the most desirable of the population have any shot of acceptance.

The only short with subtitles, Offbeat more than worth having to do a little reading. It’s a beautiful examination of the pressure to live up to societal expectations of perfection and the importance of marching to your own drum.

A driver emerges from a massacre unscathed and finds himself trapped in an endless cycle of saving the final girls. The Driver soon learns that one mustn’t fight the rules of horror, and the past he’s been driving from catches up to him.

An overwhelming fan favorite and winner of the 2020 Audience Award, The Final Girl Returns makes its World Premiere at the Etheria Film Festival. It’s a scary, stylish love letter to the slasher sub genre.

The film both looks and sounds amazing. Smartly written with a clever subversion of genre tropes, it wears its diverse cinematic influences proudly on its sleeve. Effortlessly cool and legitimately frightening, it’s a film that asks what it means to survive a horror movie — and is there really life after the credits roll?