Based on a Taiwanese video game, the chilling soundscape and unforgettable visuals of “Detention” may haunt your head, but its story will haunt your heart. 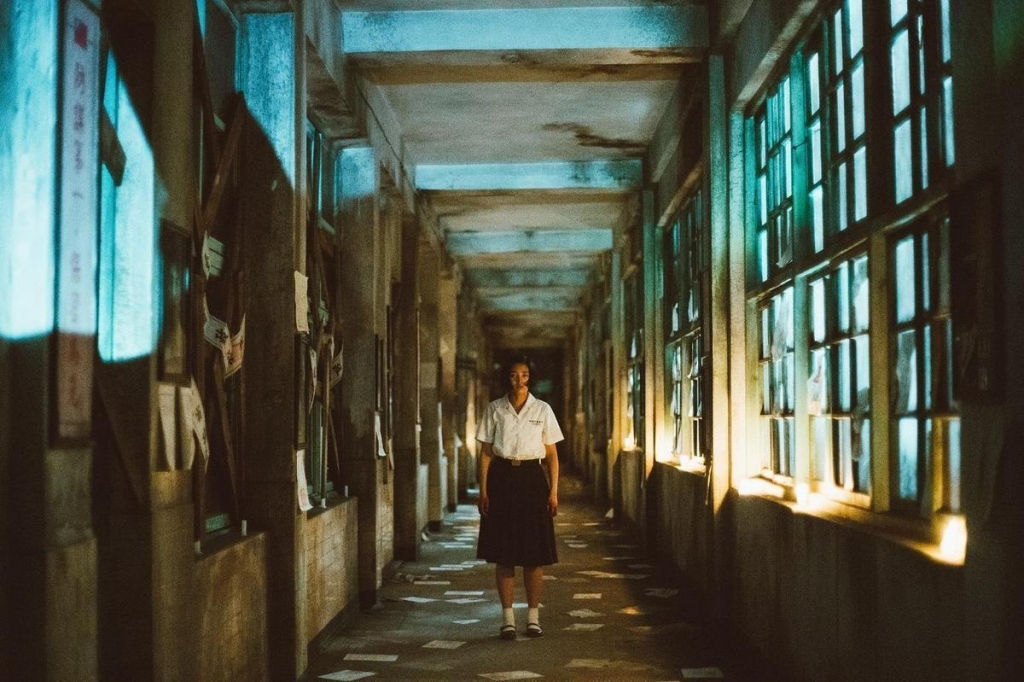 Director John Hsu’s Detention is set in 1962 Taiwan amidst the “White Terror” era, which ran from 1947 to 1987. During this time, under the control of the Kuomintang (KMT) Party, many alleged dissidents were arrested and executed for being dissidents.

In Detention, the story is set within the compound of the Greenwood High School. Every morning before classes the students and teachers recite a pledge to the KMT Party. As the students walk into the school grounds, they are under the watchful eyes of military guards looking for students hiding material, such as books, banned under the Taiwanese government.

Despite being under a watchful eye, an underground book club led by two professors has begun. Paranoia runs rampant, and the fist of oppression closes on the school when students Fang and Wei find themselves waking in their school. However, it’s a version that is different than what they are familiar with.

As they walk the halls, they find the building in disrepair and empty except for them and, eventually, the ghosts of oppressors and the oppressed. 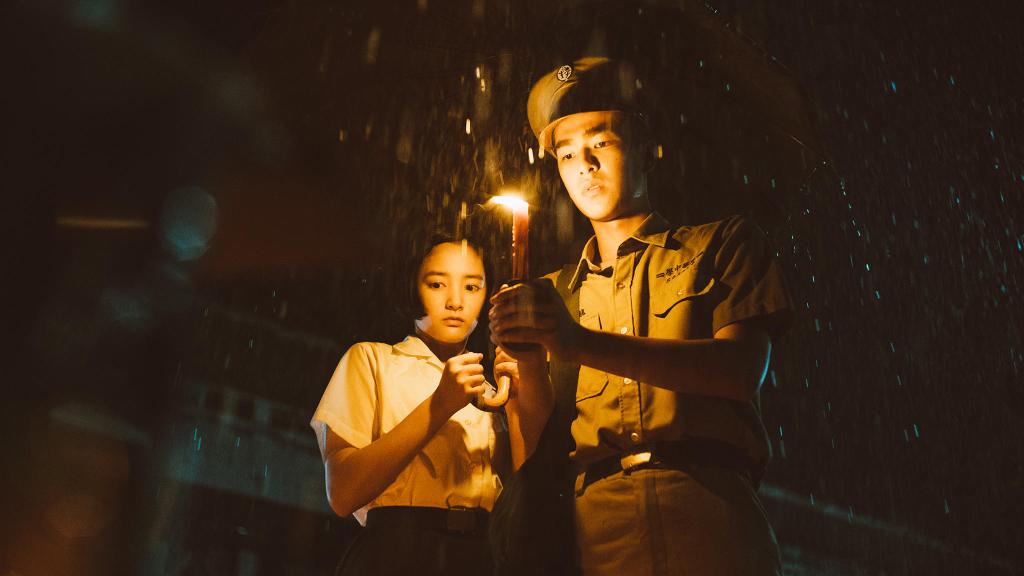 Both students also encounter a tall-man like monster dressed in a KMT Party uniform that is chasing down dissident students. The monster’s face is a mirror, reflecting the victims’ faces back at them.

As Fang and Wei look for an escape and disappear deeper into the labyrinth nightmare version of the school, they realize their escape is dependent on their memories. Both need to remember what happened to the book club, and their involvement in what happened, to escape their living hell.

As they pull back the curtain on the mystery of the school and the book club, they may find the truth more frightening than the specters haunting them in the school’s halls. More secrets are hidden within those walls than the ones being kept from the enforcers of Taiwan rule.

On a surface level, it’s easy to see the comparisons I have been seeing online to Silent Hill. 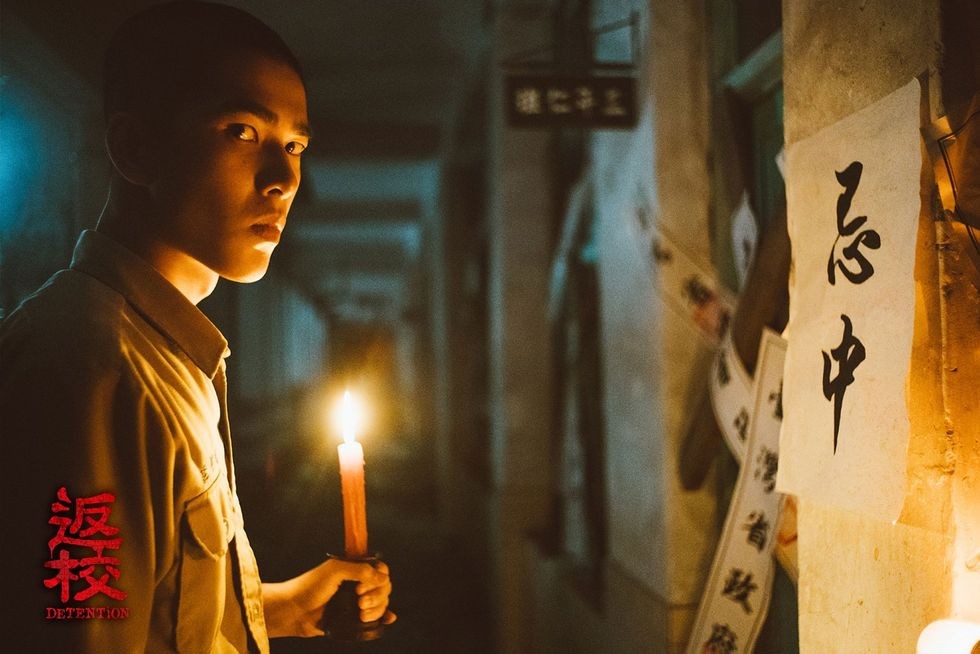 The design of the nightmare school, the KMT Party monster, the ghosts that roam the school’s halls — especially the one without a face, dripping blood in its wake — are easily comparable to the visuals seen in Christophe Gans’ chilling 2006 film, Silent Hill. And like that film, Detention is also based on a popular horror video game.

The cinematography of DETENTION is lush, and the scenes of the events leading to the nightmare are brightly lit, set almost entirely in the white, sanitized appearance of the school. The scenes within the shared nightmare-scape of Fang and Wei are tinted in a golden hue and full of bold colors lit mostly by candle flame.

The two characters we follow, Fang and Wei, while having a shared nightmare, both have very different reasons behind their search for truth.

There is more than a book club’s secrets being hidden. 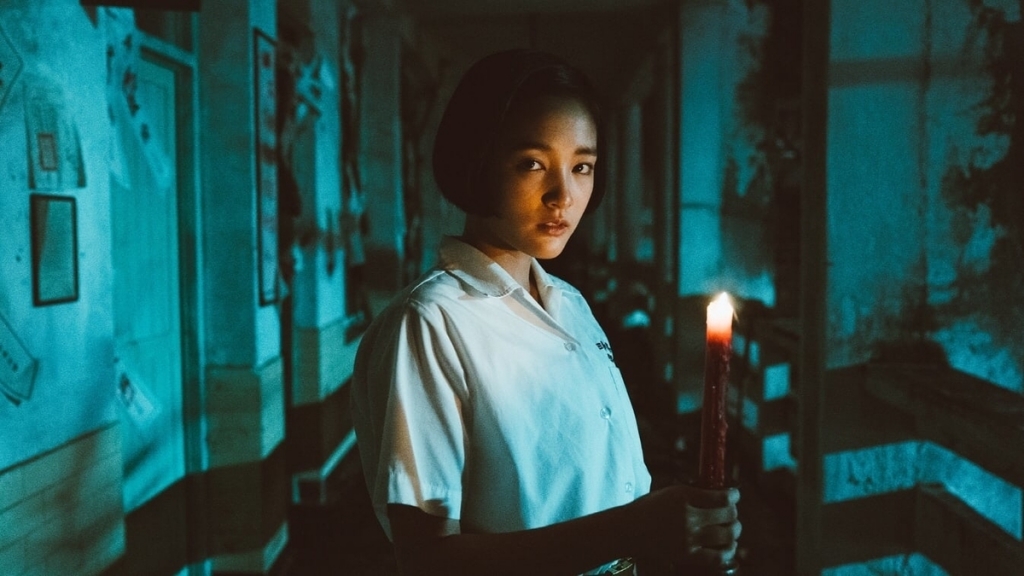 Wei is a student leader of the book club. He steps forward to protect students who might give up the club by mistake. The students are always under the watchful eye of Instructor Bai who is waiting for a reason to interrogate students or teachers for possible dissidents. Bai has no fear of making examples of anyone he finds guilty reading or passing along banned books. Usually that example finds a guilty person at the end of a hangman’s noose.

Fang is hiding something more than banned reading material.

She walks the grounds with her head down avoiding eye contact with most people. She has a burgeoning love with Professor Zhang, who leads the book club. He has mysteriously disappeared, but there might be more to his disappearance than banned reading material. Fang is also hiding a dark secret about her family: an abusive father who is a rising political figure and a mother desperate to escape a man whose oppressive actions match those of the government he supports.

Detention is a multi-layered movie that uses horror as a backdrop to reveal the atrocity of an oppressive government. 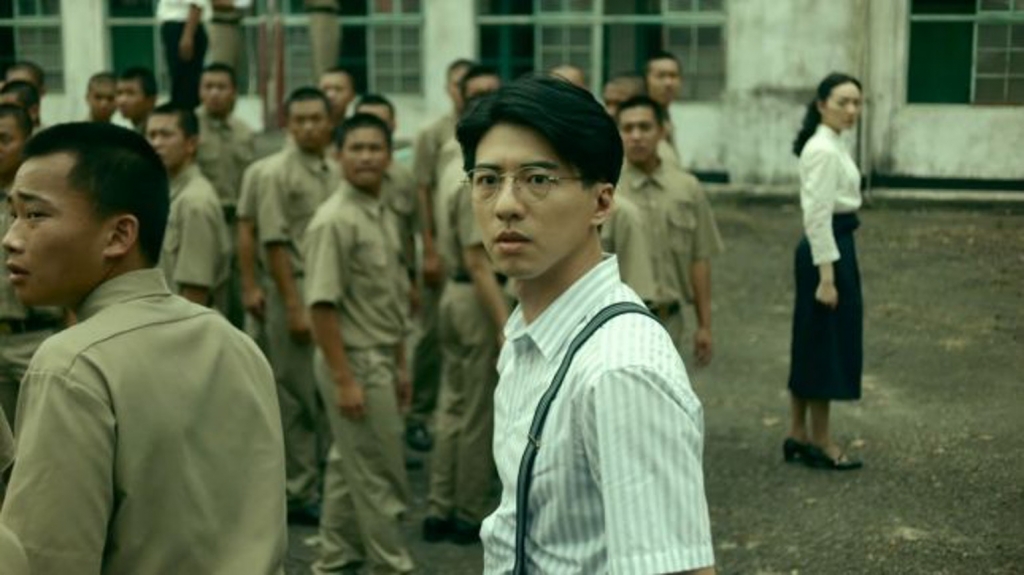 It also reflects the dark ways that people can wield the power of the oppressor for their own gain.

Buoyed by moving and powerful performances by the leads Gingle Wang as Fang and Chin-Hua Tseng as Wei, Detention reveals the human pain, cost, and schisms caused by secrets — and that, in the darkest corners of oppression of thought and feelings, the light of hope still shines.