The terrifying and adrenaline-fueled survival film “Bushwick” makes viewers confront their darkest fears in a startling and hugely satisfying way.

What would you do if your neighborhood suddenly became a war zone? The sounds of automatic rifles spitting swiftly through the air like the battle cry of lost soldiers. Instantly everything around you changes, and the bodies begin to stack up.

Bushwick is a 2017 action film, written by Nick Damici and Graham Reznick, and directed by Cary Murnion and Jonathan Milott. The film stars Dave Bautista (Guardians of the Galaxy vol.1 & 2, Avengers: Infinity War) and Brittany Snow (Prom Night, Pitch Perfect). When a militia group threatens their neighborhood, an unlikely duo pair up in a fight for survival in this intense, darkly crafted work of art.

Bushwick is technically categorized as an action film, however, there’s an underlying ominous presence that produces a deeply seductive horror vibe.

Sometimes, even though films are labeled a certain way, they appear to be deeply rooted more in one category than another. Bushwick plays to that aspect, assuming more of a horror role as opposed to action.

Flat out, this film was just all around fun, as the consensus among viewers seems to agree. There were just so many things to like about it. Its fast paced action, laced with specks of the macabre, added the special touches it needed to make it stand out. It’s a beautiful, tense, muggy film that holds no punches. Like a diamond in the rough, ‘Bushwick’ sparkles.

Right out the gate, this film catches speed like a runaway train. It’s like a head on collision waiting to happen. The fact that life begets death is a scary and dire outlook for most. It’s something mankind tries to push as far back in the mind as possible, pretending it doesn’t exist. It’s a reality a significant portion of humanity likes to sweep under the rug.

But what Bushwick does is capture that idea, chauffeuring you on an apocalyptic journey into the darker side of mortality.

This film tackles the one topic that frightens humanity the most, death. It shows you how insignificant individual life is deemed and how we as a race are virtually just a grain of sand in the expansive universe. While society likes to use the statement that every life matters, Bushwick embellishes on the thought that not every life actually has meaning or significance — that, as bad as it sounds, some of us are simply born to die, leaving no fingerprint behind.

The subtle nod that not every existence is valued as it should be is what pushes this film into the horror category. Bushwick is a tale of a nation at war within itself, which, with the current state of political affairs in the world, is a reality that could possibly bear truth in the near future. The implications of this film are beyond that of the normal spectrum, reaching far down into the illimitable pit of the human psyche. 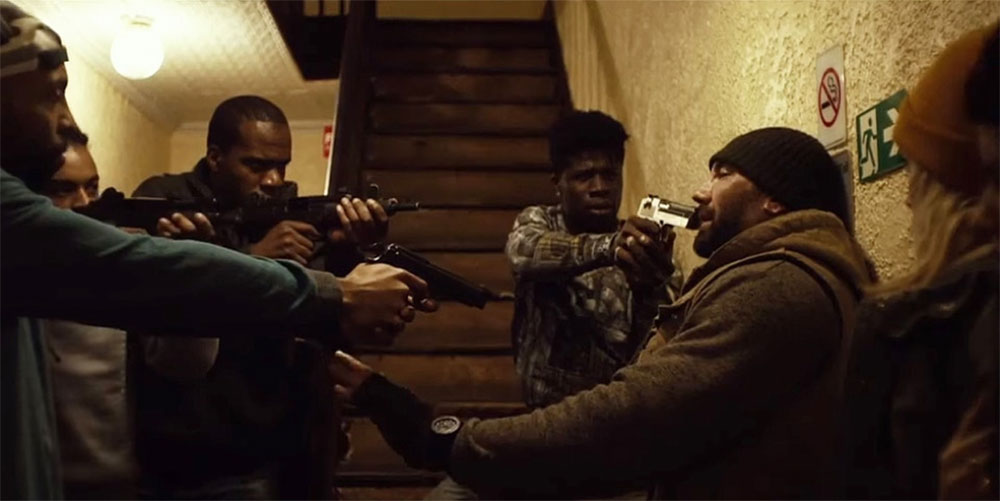 It’s a grisly look at an unspoken subject, which lies just beneath the surface of our everyday reality.

One of the things that stuck out the most about this film was the acting. The character portrayals were on point, just as expected, despite the unusual casting team up. Together, Snow and Batista deliver a realism and an empathetic genuine feel throughout. The acting was believable and convincing, and although they are thrust into a situation without knowing each other, the mutual camaraderie the characters emit on screen is easily digestible and somewhat fulfilling.

There’s not much in the dialogue category, nor the story, aside from the few veiled issues. However, the cinematography was especially amazing, giving the film a gritty, yet brutally beautiful tapestry. Also, the attention to detail in costumes and makeup really draws you in, placing you right there in the thick of it. In addition, the directing was nearly perfect, which is what seemed to shine the most about the film. 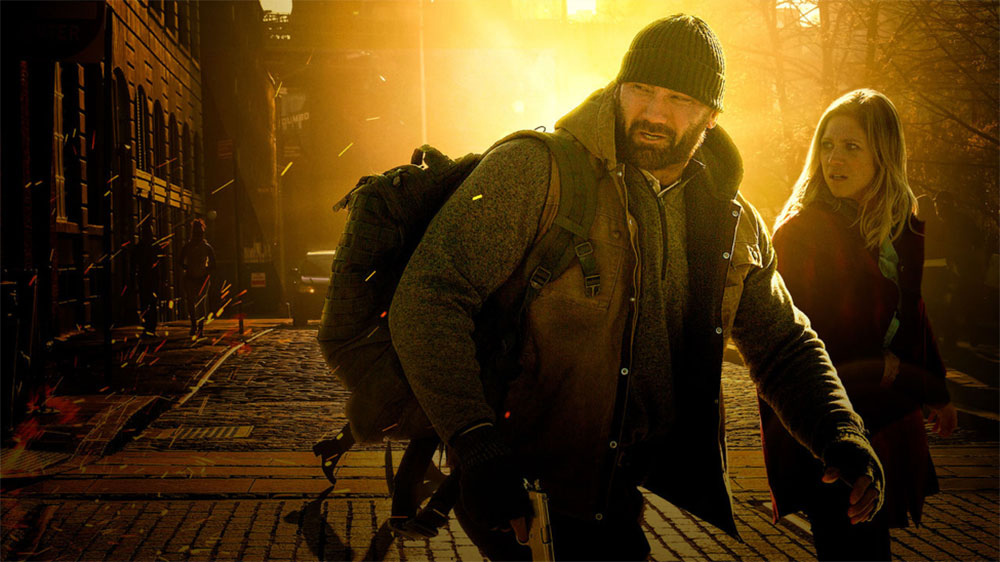 Bushwick, in a lot of ways, is similar to the classic zombie tale The Night of the Living Dead, directed by the late, Legendary George A. Romero. Both films essentially convey and share the same outlook, which is humanity vs itself. It’s the view that, when it comes to survival, only the strong shall endure. And, to add a little intensity to the film, there’s also a killer twist that will leave its viewers in shock, adding some spice for flavor.

Overall, Bushwick is not what it appears to be on the surface. It’s a sneaky, deceptive film that jumps out and grabs you by the throat. It’s a surprising, emotion-inducing beast that pokes and prods the everyday fears that smother society. So, with all that’s going on out there currently, do yourself a favor and give this film a turn. It’s bound to change your perspective on how you view life.