“Woodland Grey” is a lovingly crafted and slow-burning psychological creeper that aims high but doesn’t quite reach its full potential.

Reviewed as a screener for Panic Fest 2022, Woodland Grey stood out from the rest of the pack due to its small cast and (essentially) single location.

Due to the COVID pandemic, a whole slew of films from the past couple of years has gone the route of smaller, more intimate affairs. Some work, some don’t, but it’s been nice to have a larger variety of low-stakes indie options.

Of course, horror is the best place for filmmakers to go the low-budget route, and thus we get films like Woodland Grey. Too grungy for arthouse and too minimalist for mainstream, Woodland Grey exists somewhere in between, a limbo of indie simplicity.

That’s not to say that Woodland Grey has nothing to offer.

It may be simple in execution, but director/writer Adam Reider ensures that there is plenty of goings-on underneath the hood. It’s just a shame that many of said events are obtuse or never fully expanded upon.

A man living alone in the woods saves the life of a young woman, forcing them to coexist. After she makes a discovery in the woods behind his house, she releases something truly terrifying.

In the most unintentional cinematic version of “two truths and a lie” that this reviewer has experienced, not all of that breakdown is accurate. Yes, he lives alone in the woods, and yes, the young woman makes a discovery in the woods.

But terrifying? That’s…a bit of a stretch.

This is not horror in the traditional monster or jump scare sense. No, Woodland Grey is much more of a psychological mind-trip than a true horror film. And that’s ok. I enjoy psychological tales, especially when they focus on the themes of loss, regret, shame, and despair.

Can those things be terrifying? Absolutely. Yet in Woodland Grey, they aren’t terrifying so much as emotionally draining.

Guilt and loss are the two main emotions that permeate this movie from start to finish. Plenty of other films have explored what it means to be in limbo, whether physically or emotionally (or both), but Woodland Grey excels in this department. As the movie nears its end — and the reasons for William’s sense of purgatory become (mostly) evident — some of the bizarre storytelling choices make sense.

Heavy emphasis on some, however, which I’ll explain more later.

When a movie goes for the minimalist route, its success or failure depends heavily upon the actors bringing the script to life. 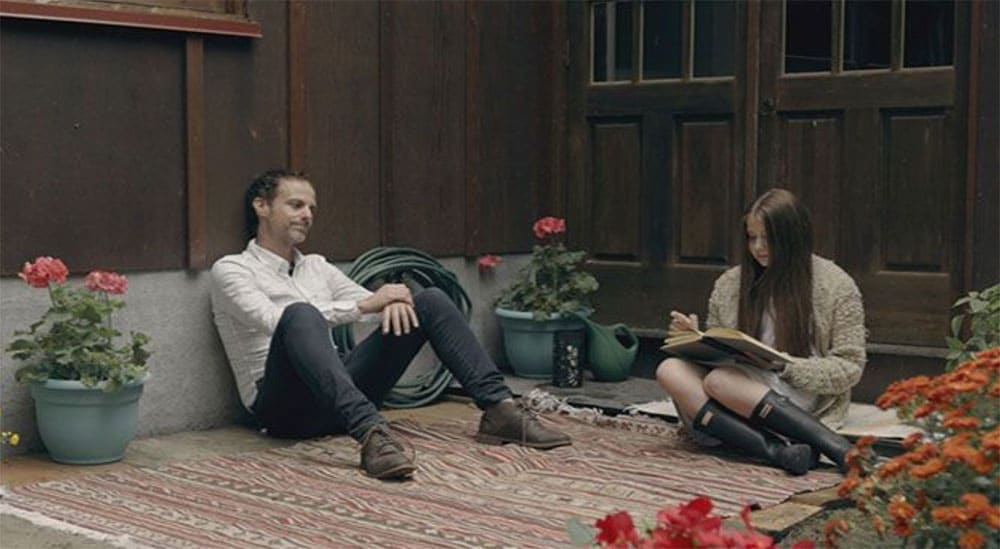 This movie features only four principal cast members, two of which are great right from the jump.

Ryan Blakely, who plays William (the man in the woods), is gripping right out of the gate. He manages to convey a bevy of emotions with very little dialogue, relying on facial expressions and body language to sell his character’s inner turmoil. This is especially important seeing as how he doesn’t even speak until roughly fifteen minutes into the movie.

The other standout character is Moses, played by wonderful Canadian thespian Art Hindle. Though his scenes are few, he brings a much-needed gravitas to the role, and I found myself wishing that the movie had more reasons to include his character.

Jenny Raven (possibly one of the best names for a horror actor ever!) plays Emily, the young woman lost in the woods. She is also Moses’ granddaughter, a fact that has relevance within the story. I was a little concerned when she was first introduced, as Jenny’s performance initially comes across as wooden or stilted. This was a surprise considering her raw talent. But she seems to settle into the role after a bit, and my worries evaporated.

One of the best things about Emily’s character is that she is no helpless damsel. She is, in fact, far more capable in the woods than William, which both characters point out several times.

The fourth main character is William’s daughter, who is essentially the impetus for the entire narrative. Teen actress Chelsea Goldwater isn’t given the meatiest of scenes to work with, but she does well, especially when she’s playing the “spooky girl”.

The woodland location suits the movie’s look and theme quite well.

Most of the film takes place at William’s campsite, with a dilapidated trailer and endless autumnal foliage underfoot. The ominous shed behind William’s campus (and featured prominently in the trailer) looks suitably spooky.

There have been some comparisons to Blair Witch, though I find those misleading. Plenty of scary movies take place in the woods, some long before three student filmmakers hiked into the Burkittsville backcountry. And Woodland Grey is by no means a found-footage film.

No, if I had to make a comparison, I would lean more towards Donnie Darko if anything.

True, the urban vs. woodland settings are about as dissimilar as can be, but it’s in the tone where both movies run parallel. That same sense of confusion. A little bit of time manipulation. Characters pushing their emotions down deep. Unreliable narrators. A quasi-dreamlike feeling.

But while Donnie Darko was able to translate those strange elements and come away with a phenomenon, Woodland Grey doesn’t quite reach those same heights.

The small cast, while effective, limits the reach of the movie.

Also, Woodland Grey is just a tad too ambiguous for its own good.

Don’t get me wrong; I will always give kudos to movies that don’t try to hold the audience’s hand the entire time. And I’m perfectly good with weird. But there are just a few too many bizarre events or themes that aren’t quite expanded upon enough.

Ambiguity, when used sparingly, can truly elevate a narrative. But then a film relies almost entirely upon ambiguity, to the point where it’s actively avoiding answering some fundamental questions by layering on more “that’s weird” moments, then the audience’s comprehension suffers.

Yes, I believe I understood what Woodland Grey was trying to convey, and I’m pretty sure I made sense of the ending (inexplicable though it might seem). But a little extra exposition would have gone a long way in making this a more accessible offering.

The necessary pieces were certainly in place.

The cinematography is solid. The set designs (few though they might be) are top-notch. The score and licensed songs are fitting. All these things, coupled with solid performances, should have led to a great indie film. Instead, we simply get a good one.

Still, good is better than bad, and Woodland Grey is absolutely worth a watch. I can even see why it won accolades in the indie circuit. It is absolutely a better low-budget offering than many I’ve seen. Especially those dealing with purgatory, whether real or imagined.

I would say Woodland Grey is certainly worth a watch. Just don’t expect to walk away with all the answers.