Santa himself is on the naughty list in the snowbound Norwegian slasher “Christmas Blood” — a bloody new Christmas horror film perfect for slasher fans. 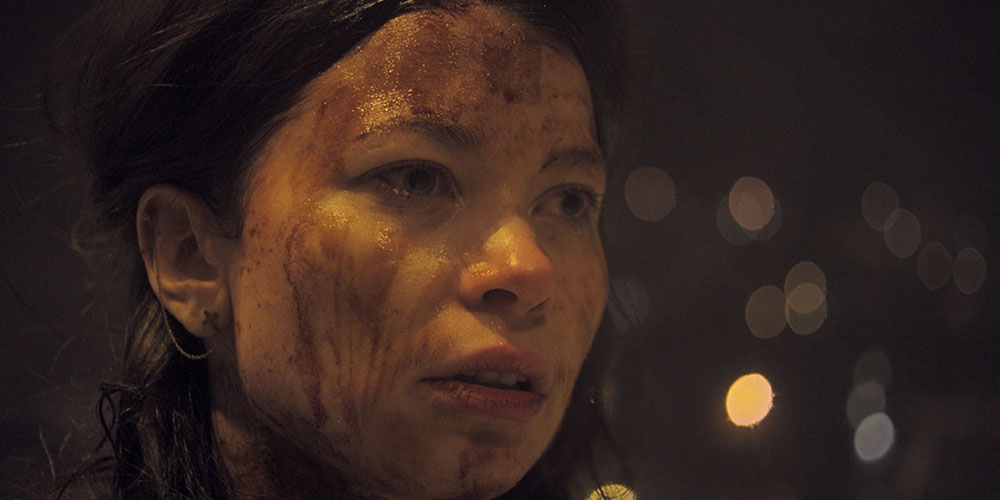 Christmas Blood is a Christmas horror with an ominous retro feel, much like John Carpenter’s classic film Halloween.

In the film, we meet a new murderous Santa — a killer described as “the manifestation of pure evil”. He has a list of folks on the naughty list who need to be dealt with. Much like the Shape, this killer is an unstoppable force. He is nowhere and everywhere all at once, and he can’t be killed. His ax, like in other killer Santa movies, is his murder weapon of choice. 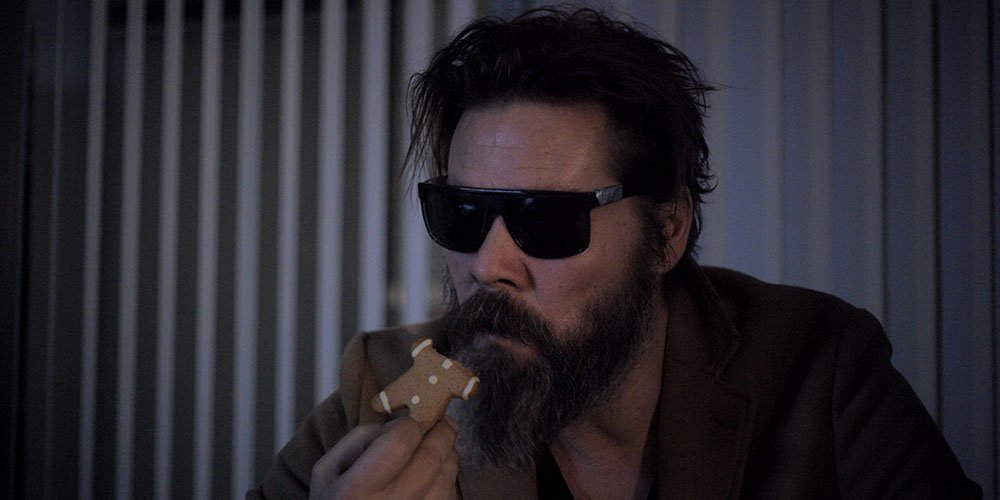 After this film, that ax can go up in the horror hall of fame, given Christmas Blood‘s impressively high body count.

Official Synopsis: A murderer gets caught after terrorizing and killing people on Christmas Eve for the past 13 years in Norway. After being in solitary for almost 6 years, the psychopath escapes a couple of days before Christmas night. Police track down the next target of the killing machine in a small village in the northernmost part of Norway. A group of friends are having a reunion in the same village and unexpectedly end up being in part of Santa’s plan.

In an insane opening scene, a sweet little girl sneaks down to see what wonderful presents Santa has delivered to her. Unfortunately, it’s not the Grinch she runs into…but someone far more sinister. From this moment forward, we know who we are dealing with — and he doesn’t have gifts in his bag. Santa has an ax, and he knows how to use it. 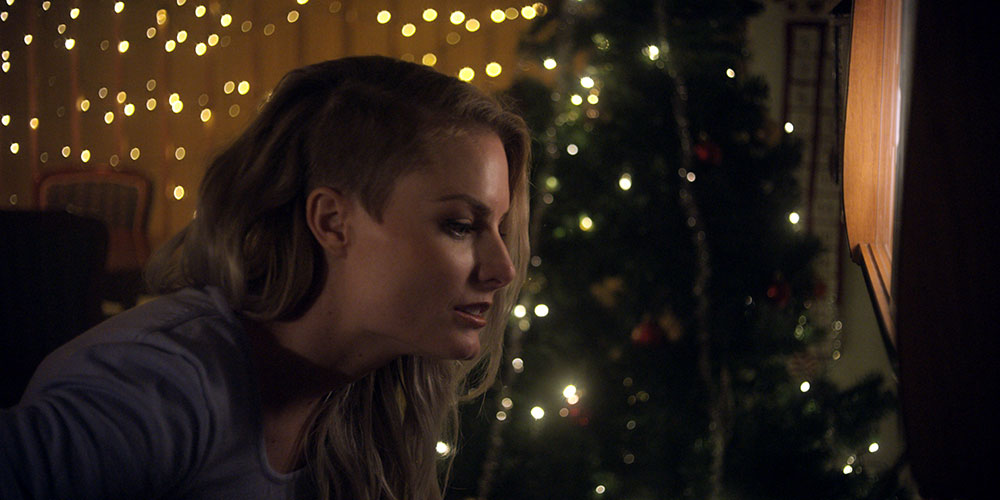 He leaves a list behind, inside a split open corpse, with hundreds of names on it, letting us know what his future plans are. But before the Yule time killer can do any more dirty deeds on this Christmas Eve, he is shot by Thomas Rashch (Stig Henrik Hoff), an angry detective who has been chasing him for years. Of course, every horror fan already knows that he’s not really dead. Instead, it’s off to prison for our psycho Santa.

Sidenote: I love that his mug shot shows how he was shot, with a huge bullet wound scar on his forehead. This is not a Santa you can slay!

After spending a quite a few years staring at the wall at the asylum and eating nothing but porridge, we find out (with news clips and subtitles) that our Santa has escaped, and he is out continuing his quest to kill everyone on his list. 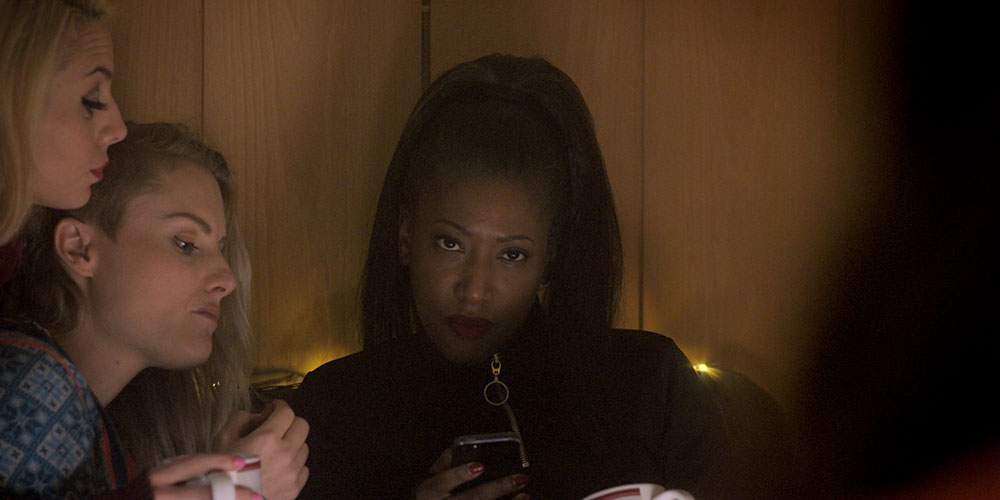 Unfortunately for a group of college friends having a reunion, Santa is heading their way. The mother of one of the young ladies is next on the naughty list. But no one told Santa that she committed suicide, and the girls are simply having a get together to commiserate with the daughter. It’s lucky, however, that they are a seriously unlikeable bunch of humans. Thus, my hopes for some seasonal slaughtering were likely to come true. Good riddance to a bitchy bunch of mean girls and a couple of rape-on-their-mind guys from Tinder.

The police continue to be incompetent. With a new cop, Detective Hansen (Sondre Krogtoft Larsen), at the helm, they are still having trouble putting the facts together — even with the help of the original detective, now a drunk, Thomas Rasch. It also doesn’t help that there is practically a whiteout snowstorm to deal with. That slows them down, but not our supernaturally strong and sadistic Santa. He has no problem taking out anything that breathes in the quiet little Norwegian town.

I really enjoyed the dark, dreary and bleak cinematography.

It really set the mood for all the killing. The snow looked real, and the victims looked so cold it made me shiver. The outdoor chase scenes were chilling. The acting was top notch too, even if the characters were mostly unlikable. The better to ax you with, my dears!

Part of what I appreciated, too, was the incredible practical effects. I believed every ax chop, sickly splatter or disgusting wound, and the visceral flow of the tremendous amounts of blood used. It was very realistic. Each kill had its own style, even personality. This Santa has a pretty sick sense of humor. Wait till you see the snowman he finds time to build! 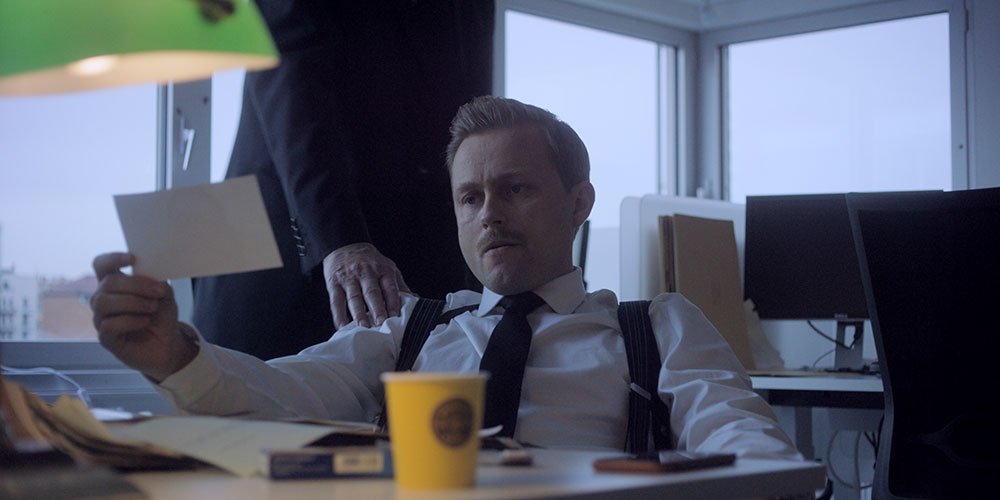 My only real complaint is that this film is designed as a slow burner, but it happens to be one of the slowest moving I’ve ever seen. There are payoffs, but much could have been cut, and it would have been a quicker paced and more enjoyable film.

I wish I could say it was as good as Rare Exports, another holiday horror from Norway which happens to be one of my all-time favorites. Alas, it is not. Don’t get me wrong though, I enjoyed this cold and bloody Christmas Eve slaughter fest.

Christmas Blood holds its own, even if just for the gratuitous gore alone. And since we can’t help but hate almost every character in the film, it’s not hard to watch them die, one, by one. Merry Christmas!

Christmas Blood (or in Norwegian ‘Juleblod‘) Is available now on Amazon Prime from Artsploitation Films.