“Tiny Cinema” is a Twilight Zone-inspired anthology with an absurdist twist — an unpredictable journey with the perfect tour guide. 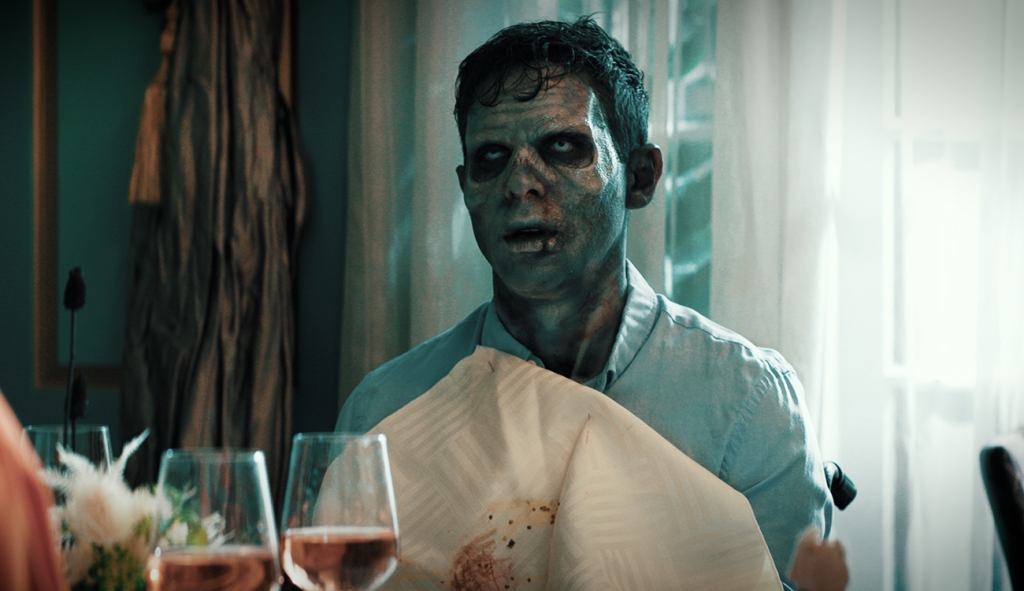 I first discovered the genius of writer/director Tyler Cornack and his writing partner Ryan Koch via their feature film Butt Boy, which made a splash at Austin’s Fantastic Fest. It was much weirder, funnier, and smarter than its zany premise promised.

Now, Cornack and Koch are back with a highly anticipated follow-up, and I jumped at the chance to wade back into the deep end of the peculiar pool with Tiny Cinema.

This wild romp through the multiverse of lunacy will certainly not be everyone’s cup of tea. You have to enjoy a particular kind of irreverent humor.

For those who do — and I’m speaking to fans of Cartoon Network’s Adult Swim original programming, the comedy stylings of Tim (Heidecker) and Eric (Wareheim) or Bob (Odenkirk) and David (Cross), or shows like Portlandia and Your Pretty Face is Going to Hell — Tiny Cinema is an absolute delight.

In the film, a mysterious stranger (the wonderful Paul Ford, whom you may recognize from The Field Guide to Evil) serves as our guide, introducing the six segments in the film — each one weirder and more unhinged than the last.

He begins by acknowledging that he’s not the typical choice for this role, but “who better than a sneaky little bad boy” to usher in our descent into madness? He promises what we’re about to watch may make us uncomfortable, even offended, but that’s “the whole fucking point.”

That’s the cunning of this film.

In the first two minutes, you know exactly what to expect and whether or not this oddity, tailor-made for the midnight movie crowd, is up your alley or not.

If you aren’t already on board, you should be by the time you finish the first segment, Game Night.

Austin Lewis is utterly captivating as an ordinary suburban husband slowly starting to lose his grip on sanity after failing to understand a seemingly innocuous joke during a regular game night with his friends. It’s a silly premise, but Lewis sells it hook, line, and sinker.

It’s hilarious, twisted, and even surprisingly poignant; a wacky romp with something meaningful to say about social anxiety and the desperate desire to fit in.

Each story has a bit of a Freudian twist, revealing something interesting about human nature. But that’s only if you’re keen to dig a bit deeper. If not, don’t worry. These wildly entertaining tales work fine without subtext, and you’re cordially invited to sit back and enjoy the ride.

I don’t want to reveal too much more about the segments, as it’s best to go in blind and enjoy the unexpected thrills. Each story stands completely on its own and pays tribute to a different cinematic inspiration — from romantic comedy to trippy science fiction, to a seedy crime thriller, and beyond.

Even as you reach the final story, you’ll still have no idea what’s coming next.

For me, there wasn’t a dud in the bunch, which is no small feat for an anthology film — a sub-genre typically defined by its uneven nature.

My favorite story was the second one, Edna, which stars the impossibly charming Oliva Herman as a woman desperate for love who learns to be careful what she wishes for.

Don’t expect this anthology to be heavy on horror. It trades more on low-brow humor and a general feeling of discomfort.

Tiny Cinema began as a theater troop focused on creating humorous micro-shorts (typically around one minute long) on YouTube. The Tiny Cinema channel is billed as “a place that’s going to make you feel weird.”

Spend a few minutes exploring the kooky content, and you’ll have a very good idea of how much you may (or may not) enjoy Tiny Cinema the film.

Tiny Cinema made its world premiere at the Popcorn Frights Film Festival and will release on VOD on September 2, 2022. If you loved Butt Boy, there’s a better than average chance you’ll also have a great time with this one. And if you haven’t yet experienced the absurd brilliance of Butt Boy, you can stream it for free right now on Tubi.