There’s plenty of fun to be had with this micro-budget ode to grindhouse glory, but there’s surprising substance beneath the splatter. 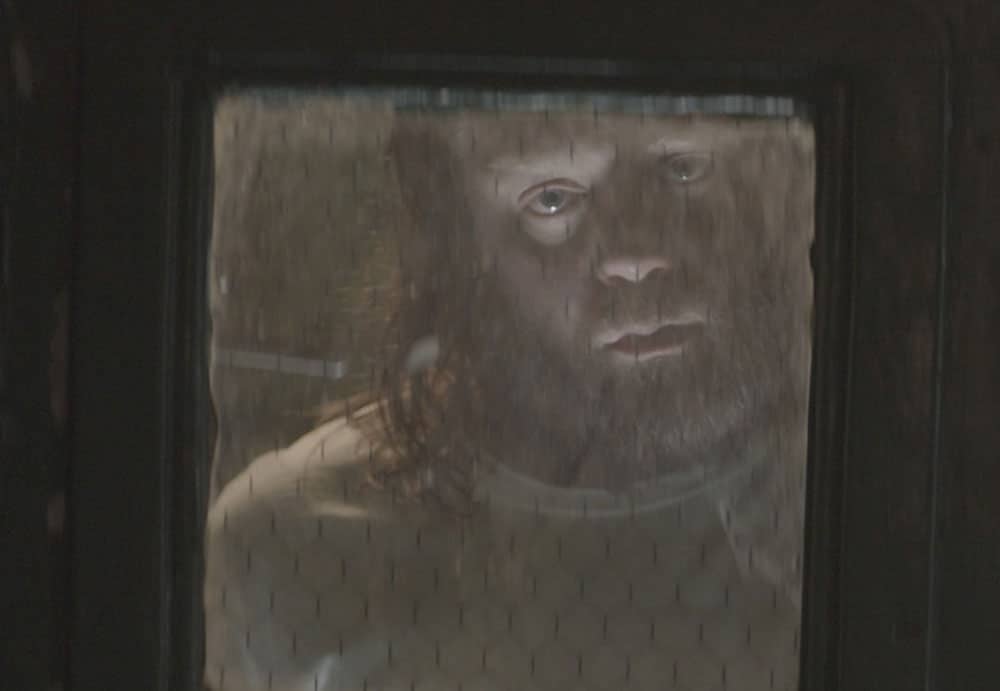 “HAS THE DRILL STOPPED DRILLING? DOES IT EVER?”

There are few things I love more than a great micro-budget indie horror film. While many audiences are turned off by a lack of professional polish, I am continually in awe of the ways these talented filmmakers creatively execute on a shoestring budget. They say necessity is the mother of invention and nowhere is that adage more fitting than the world of indie film.

I had the pleasure of previewing one such film, Rust Belt Driller, a Horror film headlining the Midnight series of DANCES WITH FILMS (DWF:LA). The film is written by Aaron Krygier (who also stars), directed by David R Williams (owner/founder/operator of Red Scream Films LLC and Razor Wire Alchemy LLC), and co-directed by Tilke Hill (making her feature film directorial debut).

When I received the opportunity, I jumped at the chance given DWF’s longstanding reputation as a champion of the unflinching spirit at the very core of the independent film scene.

I was not disappointed.

With artistic influences including Abel Ferrara’s The Driller Killer, David Cronenberg’s Videodrome, and Sinya Tsukamoto’s Tetsuo: The Iron Man, this disturbing and sometimes poignant film about an artist’s descent into madness by way of a massive power drill left quite an impression. 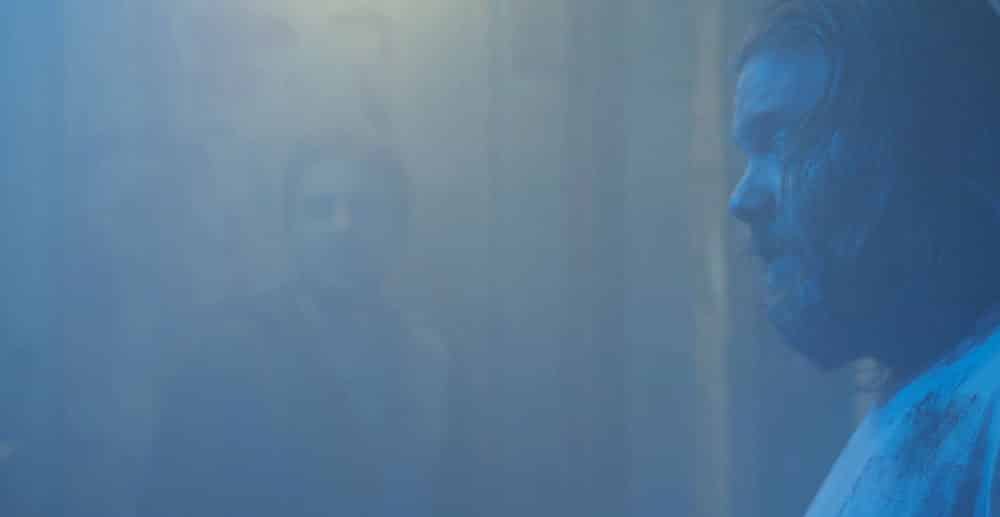 There’s a fine line between genius and madness, and soul-stirring artistic vision is so often born out of a place of darkness and despair. For many, creativity offers a comforting escape from inner turmoil — a refuge from the torment of a troubled mind or a sensitive soul. Sadly, this creative outlet may fail to fully keep the hounds at bay, and the artist must turn to other vices to quell his inner storm.

For Renn Maxwell (Krygier), the world feels like it’s crashing down around him. He can no longer rely on his talent as a painter to soothe him, now finding himself painfully blocked.

Renn owns a nice home with a private studio, and he has many devotees of his work even amid an artistic slump. He has a loving and committed girlfriend named Carol (Jillian Geurts), a beauty who is eager to overlook his many flaws. Yet, his relationship is in turmoil — a daily ritual of nasty fights and makeup sex. His compassionate manager, Abel (Stephen Jakiel), seems to care deeply for him, treating him like a son. And both Carol and Abel seem more than willing to put Renn’s needs ahead of their own, refusing to lose faith in him even as he seems hellbent on self-sabotage.

From the outside looking in, he seems to have it all. But as frank discussions of mental health have become far more normalized, we know depression doesn’t care what you have, how gifted or talented you are, how many people love and adore you, or how successful you are.

Renn may have it all, but he is haunted by darkness that never leaves his side. And now, as he finds himself confronted with a world gone mad and the horrors of his mind, he can no longer keep the darkness from taking over.

Renn’s transition from tortured artist to sadistic torturer is harrowing — and often quite humorous.

While his inner demons become personified — manifesting in physical forms he can see, touch, and have intimate encounters with — visions of a truly twisted infomercial, selling a nightmarish contraption known as the ‘Drillinator 9,000’, beckon to him.

Throughout the film, we get to see a lot of infomercial host Benji Marks (a hilarious Andy Rich) and his two buxom and bubbly Driller Girls (Roselyn Kasmire and Kristina Santiago), with Benji trying out different personas to sell the “drill-drilliest set yet”. We even get to see some of the off-camera shenanigans.

These brief interludes make the film feel a bit tonally odd, but in the best possible way, providing some well-timed comedic relief from the surreal madness and twisted carnage.

The straw that finally breaks Renn’s tenuous grip on sanity comes when his manager pressures him to take a gig painting a wedding portrait for a well-to-do client. It’s soulless work, but it pays well. However, when the spoiled, inconsiderate Madison shows up for her sitting, she disrespects his craft and refuses to look up from her phone. This causes Renn to put down his paintbrush and picks up a different kind of tool to turn Madison herself into a deliciously demented work of art. 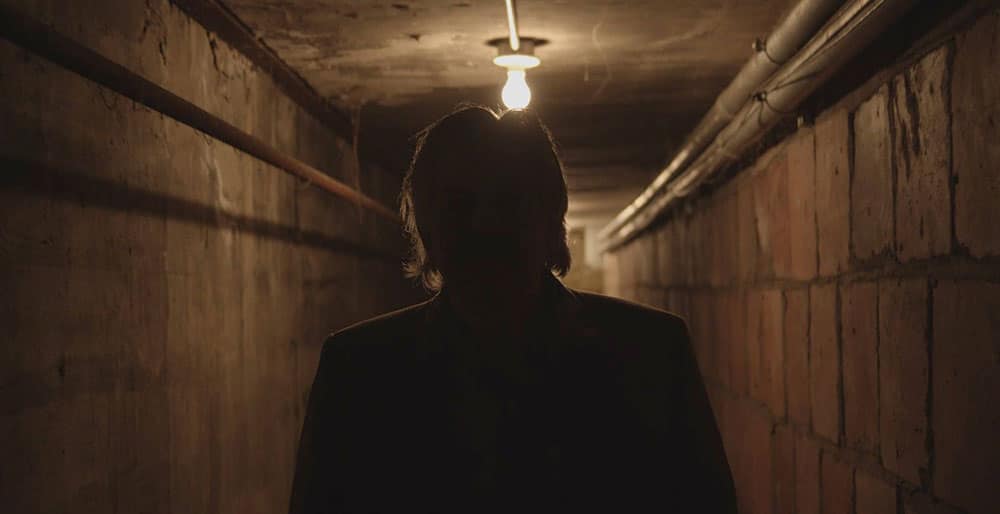 Rust Belt Driller gets progressively darker as the film progresses, and the ending packs a wallop I wasn’t expecting.

In the press kit I received, writer Aaron Krygier explains his inspiration for the film, which was partly inspired by his own real — and very relatable — personal struggles.

“When writing RUST BELT DRILLER, I wanted to convey that horror has no real boundaries or a set meaning. What happens when a person’s actual being is the horror they see and feel every day? And what if that horror has followed them their whole lives, and now is reaching out and touching them?”

Despite the comedic elements and the fantastic, often over-the-top homages to gory, grindhouse horror of the 70s and 80s, there is a sincerity and a sadness that permeates the film. As Krygier explains in the press kit, success does not guarantee happiness, stability, or even peace. And for those of us who have witnessed unspeakable horrors over the past several years, watching what appears to be the fabric of humanity ripping apart at the seems, it’s not hard to empathize with Renn’s breakdown — even as his pain takes him to the darkest and most extreme of places.

He’s a villain, yes. But he’s also an everyman betrayed by his own mind, where all the most terrifying horrors reside.

Krygier plays Renn with such understated menace, managing to be both sympathetic and utterly unlikeable at the same time.

He speaks volumes with his eyes and body language, effortlessly pulling you into his fractured mental state while saying very little.

The frustration of his loved ones, desperate to help but unable to reach the struggling Renn, is palpable and heartbreaking. Jillian Geurts is fantastic as Renn’s long-suffering companion, but Veronica Knightly steals the show as the seductive embodiment of Renn’s darkness. In an almost dialogue-free performance, she’s absolutely captivating.

It was a brilliant choice to have Knightly, as Pamela, physically representing the artist’s inner horror as something he is both frightened of and intoxicated by. She is terrifying and irresistable at once. He wants to be free from her but can’t resist her charms — finally given into her and all his dark impulses, but not with gleeful abandon; his path is one of endless agony.

Special shout out to Rowan Williams, the artist responsible for the macabre yet captivating artwork used in the film. It was a real highlight for me.

Rust Belt Driller will premiere at the Midnight series on August 27, 2021, at 11:55 PM at the Mann Chinese Theater in Hollywood. The screening is open to all DANCES WITH FILMS attendees. If you’re in the area, I strongly encourage you to check this one out and support great indie horror. Click here to get your tickets now!