“It Stains the Sands Red” is a surprisingly smart and original take on the zombie sub-genre that is as heartfelt as it is thrilling. 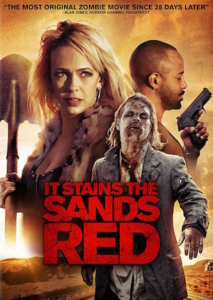 Colin Minihan’s It Stains the Sands Red is about a woman named Molly (Brittany Allen) who is stranded in the desert amidst the zombie apocalypse. However, she is not entirely alone as a ravenous zombie is tirelessly following her.

The film starts out with the zombie apocalypse already having happened. The characters seem to still be getting used to the idea of their world being overrun by the undead as one comments, “They’re not as bad as the news makes them out to be,” when the zombie first approaches their stuck car on the side of the desert road.

I liked the story starting this way without any explanation of what happened. The script is smart enough to know we’ve heard it all before and don’t need to hear it again.

The film has a lot of surprising comedy in it as Molly tries to stay ahead of the zombie stalking her across the desert, and it never comes across as unwarranted or out of place. Powered by a few bottles of water and cocaine in her backpack, Molly walks and stays mere steps ahead of the zombie, and it seems strangely natural when she begins talking to it. It’s through this wonderful set up that we begin to know Molly, her past and her motivations.

All of this is wonderfully portrayed by Brittany Allen. She’s vulnerable and tough, out of her element and strong, and she plays every aspect with a relatable believability. She largely and expertly carries the film on her shoulders, no small feat for any actor.

The film needed a strong lead performance in order to work, and Brittany Allen nails it.

The zombie chasing her isn’t the only life threatening thing with her in the desert. Along the way she encounters dangers from nature and from fellow human beings as well. It’s the Wild West in this new world, and Molly has to dig deep beyond her white furry coat, skin tight leopard print pants and high heeled boots in order to survive it. 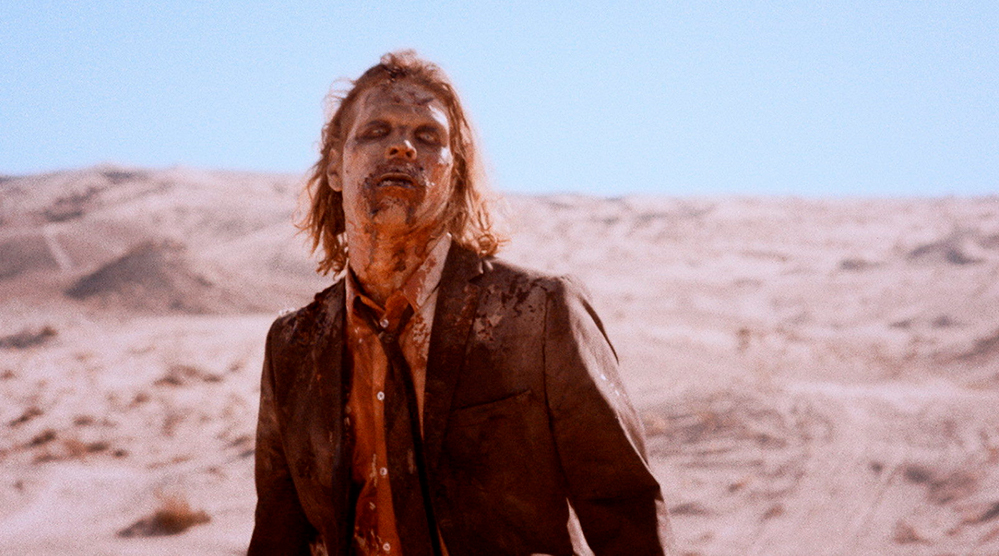 This is where the film really surprised me. Sure, it’s a zombie flick, but it’s also so much more than that. It’s a story about self discovery and finding out what you’re made of. It’s a story centered on the journey of Molly and her confronting her past. It’s a story of redemption. It just happens to take place with zombies.

It Stains the Sands Red is a completely welcome fresh take on the zombie sub-genre.

It’s full of thrills, full of humor and full of heart and humanity. It’s gritty, well acted and makes great use of its desert setting. All of this had me really enjoying this cat and mouse film. Check it out for some fantastic zombie fun and a surprisingly strong and heartfelt story.

It Stains the Sands Red is now available on Blu-ray and DVD from Dark Sky Films. Order it here on Amazon.