Minoru Kawasaki brings his newest movie, “Monster Seafood Wars” — a kaiju and culinary comedy/fantasy — to Fantasia for its international premier. 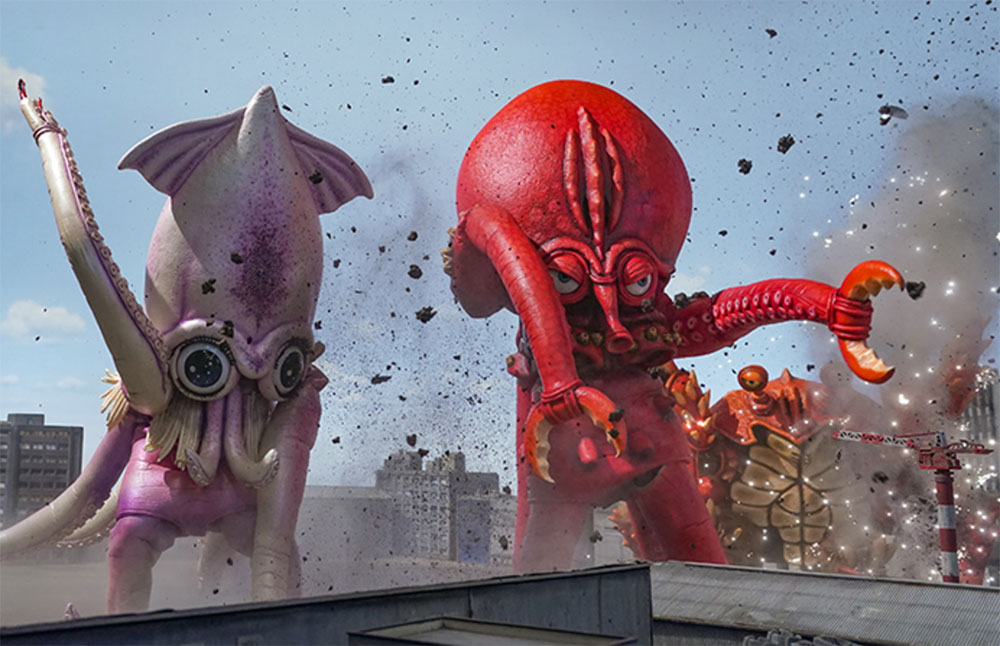 Discredited scientist, Yuta, is delivering the best quality octopus, squid, and crab to a shrine when an untimely bicycle mishap causes Yuta to lose his shrine offering. As distraught as Yuta is over losing the fish, he becomes angry when he realizes a drug he had been working on (Setap Z) was used to create a trio of monster fish that the Japanese media dubbed Takolla, Ikalla, and Kanilla. These taller-than-building monsters fought and reigned destruction down.

The Japan Self Defense Force was no match for the might of these sushi monsters.

In response to the lack of military success, a new organization was formed — S.M.A.T. (Seafood Monster Attack Team). The new team brought together scientists and military minds to create an attack plan. On the team is Yuta’s crush, Nana, who is a defense analyst, as well as Yuta’s long time rival Hikoma, who not only has eyes on Nana but on Yuta’s Setap Z creation.

Monster Seafood Wars is split into three distinct stories, and there is a love triangle arc that runs throughout. 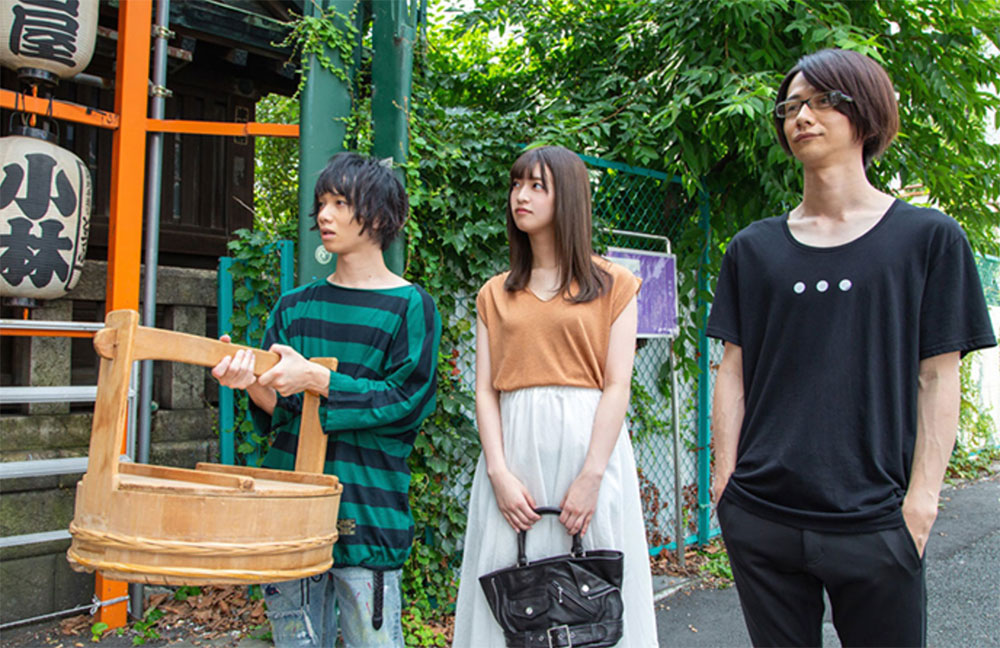 The first part of the movie is all about the creation of the monsters and preparing to battle them. When the monster crab snaps off pieces of the octopus and squid, the found monster meat becomes a delicacy.

The middle piece of the movie takes a couple of hard turns. It is revealed that Setap Z was designed to make animals larger to produce greater amounts of food to feed the hungry. There are then shots of starving people shown to hammer home this point, before spending time in restaurants serving monster meat dishes to a receptive and adoring public.

The final act returns the monsters to the story, reveals the villain, and introduces a giant robot.

Kawasaki has created a throwback kaiju film using men-in-suit monsters that look like they stepped out of an episode of Mighty Morphin Power Rangers or Ultraman. 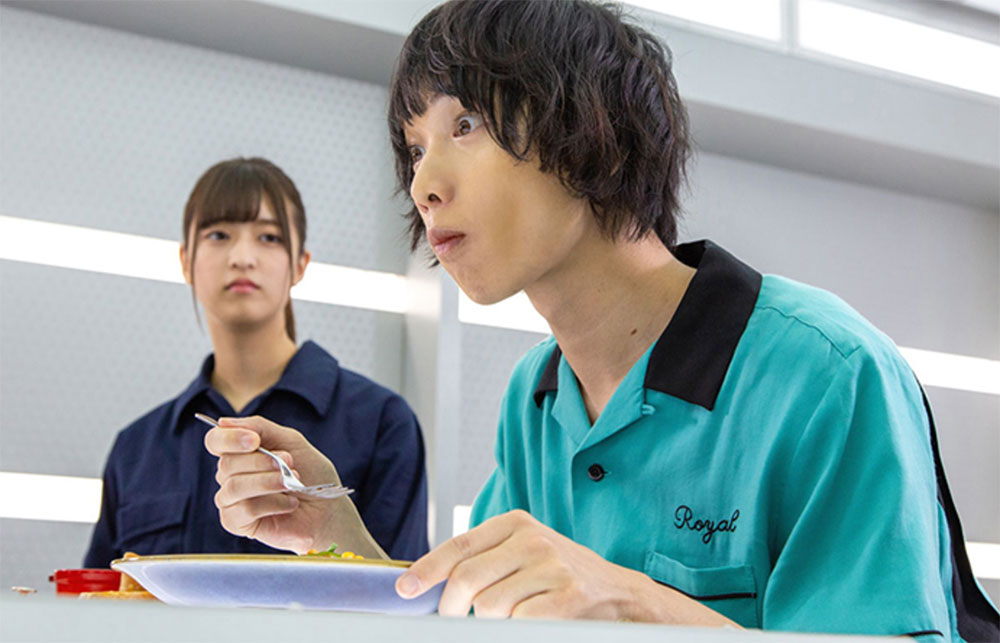 There’s an inherent silliness and charm in this film that is lacking in more recent kaiju movies like the American Godzilla films or even Toho’s Shin Godzilla.

Monster Seafood Wars is presented in a quasi-documentary style, with interviews of involved parties talking about the past events involving the monsters. After an interview segment, the past events that were discussed are shown though these scenes, but they are not meant to be re-enactments of actual events.

Kawasaki’s mix of the documentary style and traditional narrative can be off-putting in the very beginning, but it ultimately meshes well.

Monster Seafood Wars is a loving ode to Japanese kaiju monsters of the Toho Showa era. 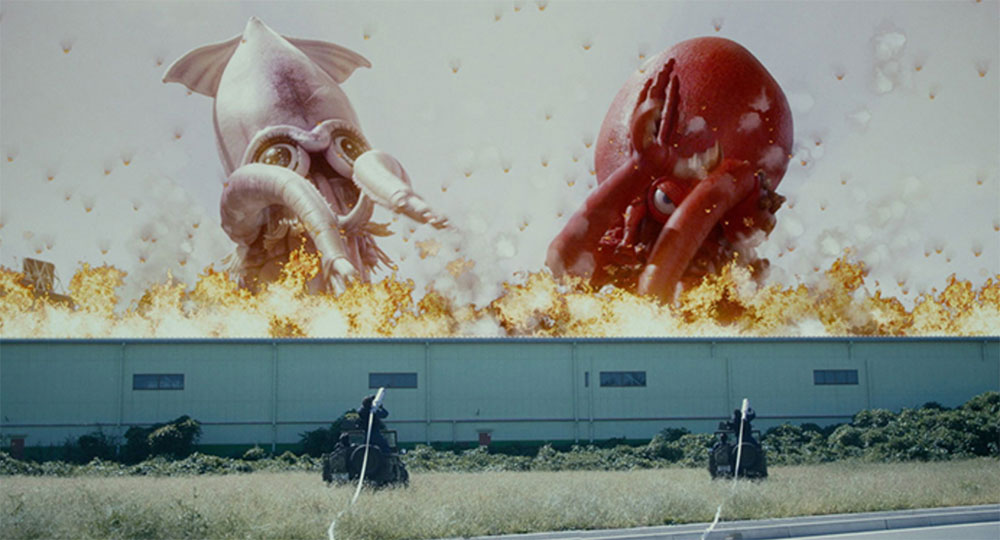 Some quick research into Monster Seafood Wars found that the story was based on a pre-Godzilla (1954) giant octopus story. It’s clear that Kawasaki has great love for those early kaiju movies and series, and it shines through in Monster Seafood Wars.

While the movie loses some momentum when it concentrates on the monster meat food creations, Monster Seafood Wars is like a warm blanket to kaiju fans around the world.

Wrap yourself in nostalgia for a time before CGI dominated fantasy movies, pretend you’re in a rubber monster suit emerging from the sea to stomp an unsuspecting city, and enjoy this wonderful film.

*Reviewer note: The Destroy All Monsters original soundtrack by Akira Ifukube was playing as I wrote this review to set the proper mood.