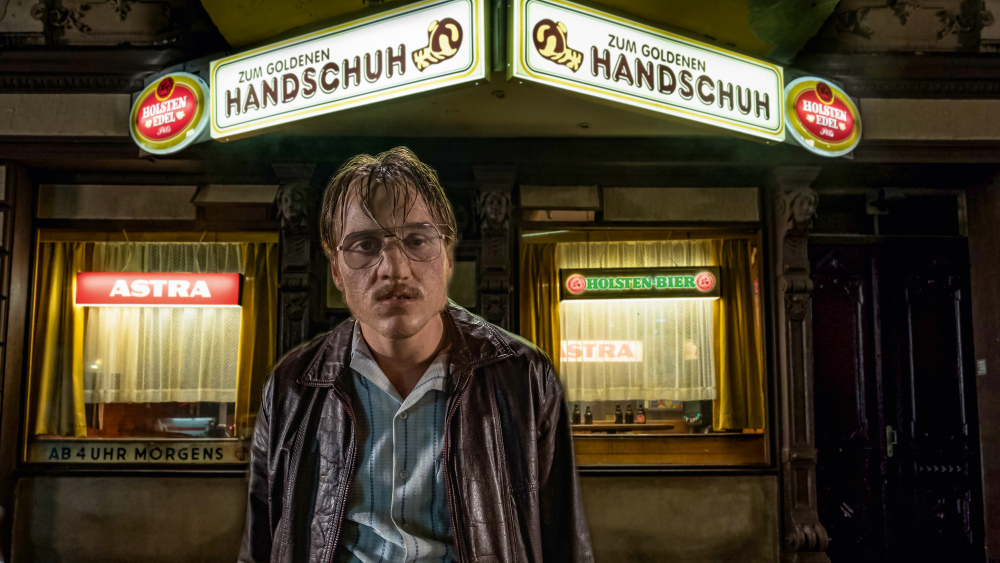 My screening of THE GOLDEN GLOVE at Austin’s Fantastic Fest began with a 5-minute introduction from one of the festival programmers, warning the audience that we may not be ready for what we were about to experience. She offered what she described as the mother of all trigger warnings.

“Seriously, if there’s anything that really upsets you, you’re likely to see it in this film.”

She even warned us of the brutality we’d witness in the first two minutes of the film, reassuring us that it was ok to walk out after the opening scene if it was all too much to handle. Finally, our host commented on some of the film’s unfavorable reviews — reviews that described it as mean, nasty, nihilistic, and horribly unpleasant. But as she so shrewdly elucidated, that’s precisely the point.

We were then treated to a brief video introduction from the film’s German filmmaker, Fatih Akin, who explained his personal connection to the controversial subject matter. Akin grew up in the same working-class Hamburg neighborhood where real-life serial killer Fritz Honka murdered at least four women between 1971 and 1974. He stated that the film, for him, is about two things. First, it’s about humanity — the connection we have to our fellow man, even to a monster like Honka.

Second, and this was the real gut punch for me, it’s about nothing.

More specifically, it’s about the randomness of life. It’s about a sadistic killer with no discernible motive, victims who lost their lives because they were in the wrong place at the wrong time, survivors oblivious to how close they came to death’s door. It’s about women whose final moments on Earth echoed nearly all the other moments of their life — marked by tragedy, unimaginable suffering, and cruelty. 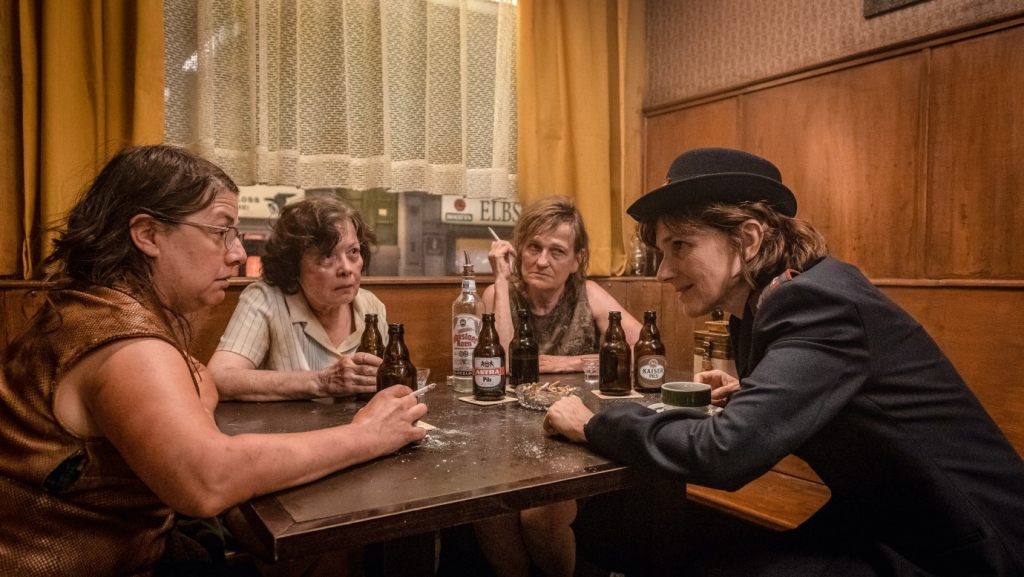 It’s this nothingness that really makes THE GOLDEN GLOVE such an uncomfortable and deeply unsettling film.

Based on a novel take from the exploits of Fritz Honka (played to perfection by 22-year-old actor Jonas Dessler, unrecognizable beneath layers of revolting prosthetics), the film never seeks to explain or understand the motives of the man who terrorized the residents of Hamburg during the early 1970s.

Despite his obvious struggles as an outcast — a lonely, impotent, alcoholic on the fringe of society —there’s no real attempt to humanize Honka. He is, quite simply, a monster who preys on the most desperate and downtrodden.

In the tradition of films like Henry: Portrait of a Serial Killer, there’s no attempt to glamorize or sensationalize these brutal crimes, no desire to make its subject more enticing, no effort to gloss over any of the visceral horror. 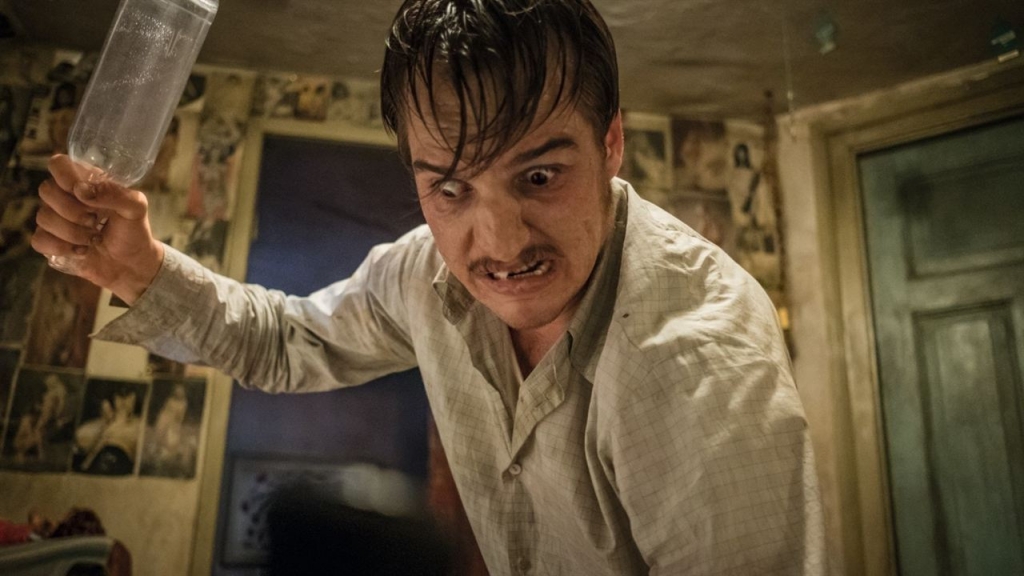 This is a film about unrelenting ugliness.

Honka plucks his victims from a seedy dive bar from which the film takes its title — a place where the broken frequent to drown their sorrows and temporarily forget their lot in life. There’s an overwhelming sense of despair and heartbreaking hopelessness in this lonely harbor, with curtains covering the windows so the patrons won’t know what time it is.

To call it a tough watch would be an understatement, even for hardened horror fans who feel they’ve seen it all.

It’s not that it’s particularly gratuitous in its depiction of violence and gore. In fact, Akin often employs clever framing techniques to obscure much of the abject horror. Rather, it’s the gritty, ultra-realism of it all that assaults the senses and makes it such a distasteful experience.

In the opening scene that immediately sets the stage for the senseless brutality and moral emptiness that defines this film, Honka saws the head off of a nude woman. While the grotesque scene plays out just beyond the reach of the camera’s lens, the chilling sound of the saw cutting through neck gristle is enough to turn the strongest stomachs.

There are scenes that feel agonizingly long, like when Honka repeatedly bashes the head of one of his victims into a table or when he struggles to choke the life out of another. The latter is a scene so excruciating and drawn out that even Honka himself appears shaken.

This visceral, visual assault — combined with the sickly sensation that you can almost smell the aroma of decaying flesh — makes THE GOLDEN GLOVE feel like an exercise in masochistic torture, a dismal submersion in a world of overwhelming despair. 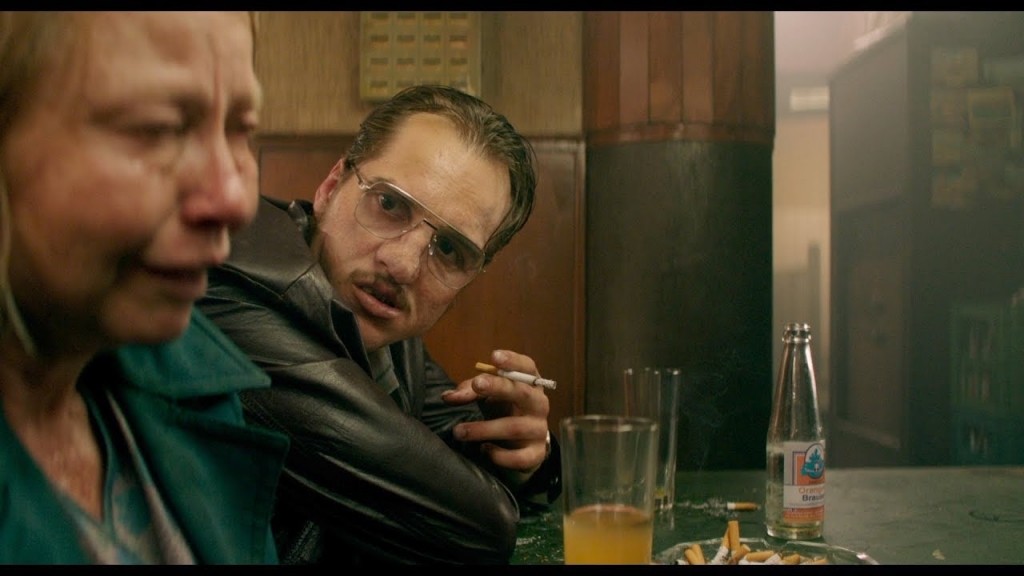 It’s not hard to understand why audiences have reacted harshly to such an uncompromisingly grim portrayal of real-life horror.

It’s a mercilessly unpleasant watch. And Akin’s commitment to realistically portraying the worst of humanity, though commendable, is a tough pill for most viewers to swallow.

And yet, in a world where serial killers become celebrities and even sex symbols — often romanticized or glorified — a film that looks at human depravity and nauseating violence with an unflinching lens deserves attention.

If you’re desperate for a point to the madness, there isn’t one. And that, in and of itself, is the point. Of all the monstrosity and terror Akin subjects the viewer to during The Golden Glove, the realization that there is no “why” is the punch that hits the hardest. This isn’t a film you’re likely to enjoy in any traditional sense of the word. It’s an intentionally upsetting watch. But it’s also a deeply compelling and exceptionally crafted artistic achievement.

Everything from the devastating details of the production design, to the makeup effects that gave birth to a monster, to masterful direction and a jaw-dropping performance from Dassler combine to make The Golden Glove an important and memorable entry in the pantheon of true crime classics.

The Golden Glove premiered at the 69th Berlin International Film Festival and made its North American debut at Fantastic Fest on Thursday, September 26, 2019.