In “The Cleansing Hour”, director Damien LeVeck shockingly explores what would happen if an actual demon from hell decided to go global.

Social media backfires on two friends when their fake exorcism show becomes horribly real. As the clock ticks down, the bodies pile up. Will Max, better known to his live stream followers as Father Max, tell his audience the truth about the show, and other dark secrets?

Let me just say something controversial upfront. I was not a fan of The Exorcist. Not only did it not scare me, I thought it was funny. Gasp! Maybe it’s because I’m not Catholic, or even much of a religious person at all. With that said, The Cleansing Hour really got to me.

The internet has taken over our society. There is hardly a moment we ourselves or those around us are not nose-deep into our phones or tablets. What scared me about this film is the concept of social media gone haywire. I always wonder how far we can go on the internet before it’s too much. Like we’ve already seen explored in Sci-Fi shows like Black Mirror, it is possible we may eventually have technology linked straight into our brains? Will we truly be wired 24/7 without ever having to turn it on or off or even carry a phone to have constant access to the online sphere?

If there truly is a Heaven and Hell, could the stuff of science fiction nightmares eventually become reality?

In The Cleansing Hour, we meet internet entrepreneurs Drew (Kyle Gallner) and Max. (Ryan Guzman) These dudes are ballsy enough to start an online show showing “actual” exorcisms live, claiming they are the real thing. Using actors as the possessed souls and some pretty nifty special effects, they manage to pull in some good audience numbers with their elaborately staged hoaxes.

Selling fake “Blessed by the Vatican” cloths also brings in some strong profits. But none of it is good enough for Max to be satisfied, since he hasn’t yet reached his coveted verified status.

When the actor playing the next possessed soul fails to come to set, Drew’s girlfriend and producer, Lane, steps in. Alix Angelis as Lane was the stand-out for me. This is a very physically demanding role. Growling, screaming, vomiting large objects and yanking herself all over the place, she must have been exhausted! At one moment, herself, and the next, totally demented and possessed. 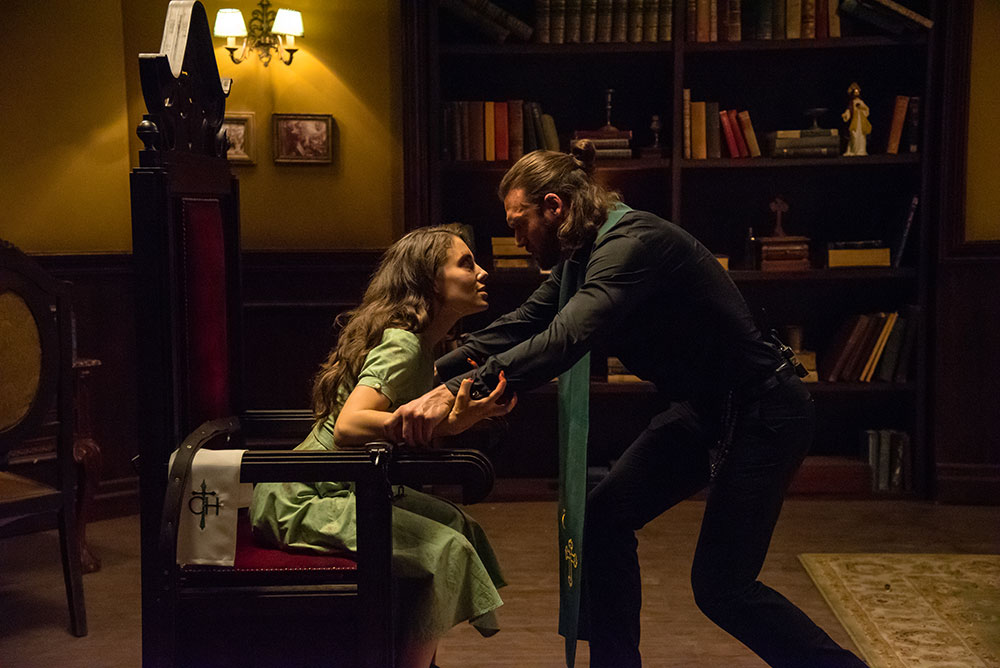 The demon wants their honesty and will destroy everything in its path to make the boys tell the audience the truth and divulge all their personal secrets. They can’t stop him, because they don’t know his name and what rite to chant to stop him. On previous shows, they just made up demon names. Now they had to find a real one.

While the number of viewers grows, they must be more and more forthcoming, or the demon will keep killing everyone in the building. Meanwhile, Drew becomes panicked that the demon will end up killing Lane as well.

I’ve loved this premise ever since I saw the original short film of the same name a few years back. Building on the much simpler story they had back in the short, LeVeck and writer Aaron Horwitz takes the feature to the next level — adding more horror, a truly evil demon, a backstory, and even a love story.

The acting overall was believable, and I really liked the flashbacks to the horrible childhood the boys had at boarding school. I could feel the connection the guys had from their school days and felt bad they were not honest with each other as adults. Aaron McVeigh and Lucas Bond, who played them as kids, were terrific. And Joanna David, who played the mean and abusive schoolmarm, made me want to smack her back. I didn’t feel bad at all for her plight in the film.

Additionally, the gore factor was high in this film. The real practical SFX and creatures done by Tom Woodruff Jr’s team were sublime. There is a crispy burned body that…well, let’s just say that it is just the grossest ever! Bravo!

I also really enjoyed watching the little vignettes of the audience. It was wonderful to see who was watching. There were so many unique and interesting characters; a diverse group of viewers all over the world. Watching them while they watched the show was very entertaining and honestly one of the best parts of the film for me. These viewers were all primed and ready to be a part of internet history, not realizing they might have to give their souls to Satan, too.

Sorry guys, as much as I liked the film, any time it went into CGI and away from the incredible practical effects, I was disappointed. It didn’t ruin the film but was a distraction.

In spite of that one complaint, The Cleansing Hour is a creative and humorous exploration into the weird world of social media and exorcisms. The satire of religion might turn off a few folks. But the creature from hell here is quite the bad-ass, and I’m sure horror fans will love him. Forget your Ouija board, you can find a real demon online in The Cleansing Hour.