Harvest Lake is a stylish, sexually charged film that challenges viewers with its surreal and thought-provoking approach to phantasmagoric horror.

It’s a challenging film to watch, but a rewarding one as well. It made me think like few films do, and its intriguing story-line combined with strong production values make Harvest Lake a shining example of why I love indie film and indie horror. 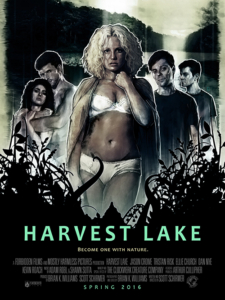 Harvest Lake is about a group of friends who encounter a mysterious presence in the woods while on a weekend getaway.

The beginning is very animalistic, as we see a man and a woman naked in the woods. They do not speak, but we are shown a strong attraction between the two and can tell they are very familiar with each other. It feels like watching Adam and Eve; innocent and in love while frolicking in nature. The scene ends on an ominous and mysterious note as the two are drawn towards a presence in the lake, thus setting the tone for the rest of the film.

The film is about little else other than sensuality and feeling, but it approaches this in a unique and thoughtful way.

Human beings are so erratic and lost, always searching. The film presents a story that suggests, when in nature, people feel less inhibited and seek to lose themselves, in this case with sex and mood altering substances. But is this losing the beginning of finding one’s self? Are people in everyday society how people actually are? Or is this animal behavior that comes out in nature how people actually are?

The experiences turn scary at times, with horrific alien like creatures that get inside and infect their host. The film pushes its own premise further by suggesting humans can’t handle the true nature of nature itself. At least the nature of Harvest Lake, anyway.

Kind of trippy, right? At one point, a character says, “Nothing will ever matter again,” if another character simply allows the painless infection to happen. It’s meant as an enticing offer, but it comes across as a further dulling of life where everything else other than sensuality is muted.

It’s a psychological and philosophical mind screw of a film.

We can choose what we succumb to, and it’s in the choosing where we find the experiences that make up our lives. We just can’t allow these experiences to consume us. And that’s exactly what happens in Harvest Lake.

In simpler terms, Harvest Lake is kind of like a mild version of The Evil Dead meets Invasion of the Body Snatchers.

Tristan Risk is untamed, and this is the perfect role for her. Much like her performance in the upcoming film Ayla, where she literally comes from nature, in Harvest Lake she is surrounded by it and seems at one with it. And when shit hits the fan, Risk absolutely shines as the effected, sensual Cat. With her mischievous eyes and feral sensibilities, she belongs everywhere and nowhere all at once. Risk is simply out of this world in the best way possible.

Ellie Church excels in the more grounded role of Jennifer. She’s observant and quiet, but turns on a dime to become a lightning rod of sexuality. Her wide eyed, blonde hair, all American good looks offer the perfect contrast to the dream like, other worldly beauty of Risk.

Jason Crowe and Dan Nye as Josh and Ben offer the most down to Earth characters in the film and are excellent in their portrayals of the Everyman. This applies especially to Ben, who, for his 26th birthday, only wants a modest weekend getaway at the lake with a couple of his friends. Ben is the only character who seems to feel truly comfortable in his own skin, making his encounter with the libidinous alien force all the more tragic.

Harvest Lake is a heady and complex film that pulls no punches in its smart, daring and unnerving approach.

It’s a challenging film to watch, but a rewarding one as well. It made me think like few films do, and its intriguing story-line combined with strong production values make Harvest Lake a shining example of why I love indie film and indie horror.