Interview with MJ Dixon and BTS of “Pandamonium”

We talk with filmmaker MJ Dixon about the latest slasher film in the Mycho Universe, “Pandamonium” and go behind-the-scenes with photos from the set. 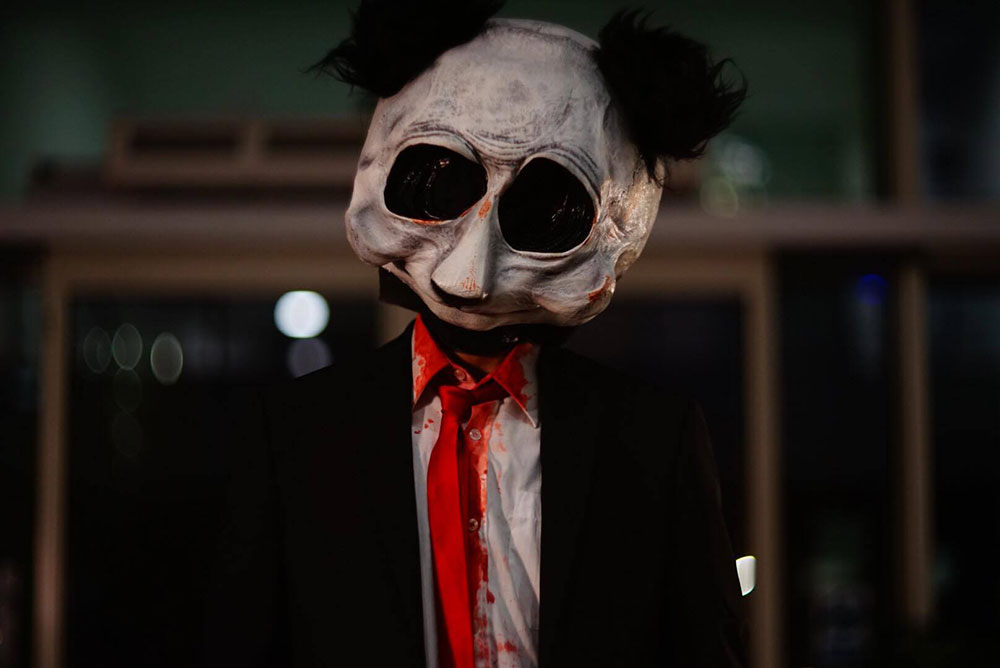 With filming now completed on the latest feature Pandamonium from Mycho Entertainment, Morbidly Beautiful is pleased to bring our readers an exclusive interview with writer-director MJ Dixon, along with some behind-the-scenes pictures from onset photographer and actor Derek Nelson.

Pandamonium is a new horror-comedy and will be the 9th feature set within the shared Mycho Universe. Serving as a prequel to Slasher House II, it sees the return of the infamous Panda Headed Killer slashing his was though his first standalone film.

Synopsis: The guys on Level 6 like to work hard, and party harder. That means the best booze, the finest drugs and the hottest women money can buy. Unfortunately for them, the strippers they’ve just hired have come with an unwanted guest. Jacob Jakushi, the infamous ‘Stripper Ripper’, with an oversized Panda mask and a taste for exotic dancers has these girls in his sights. And he’ll stop at nothing to get what he wants. It’s now Strippers VS PandaHeaded Serial Killer as they fight to survive the office party from hell. 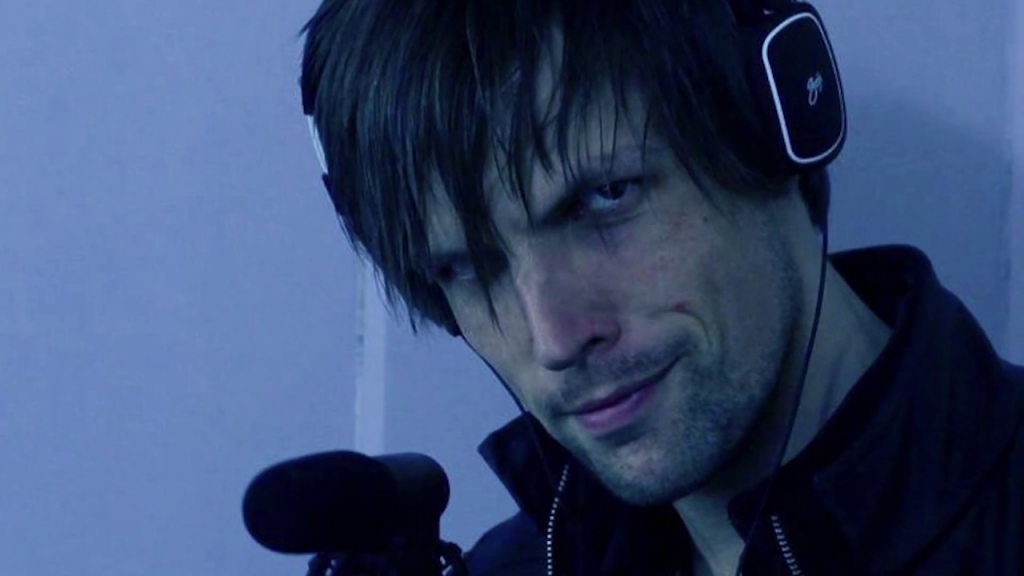 1. What can we expect from your new film Pandamonium?

I think, like with all the MychoVerse movies, we start with the foundation of a standard slasher movie. Then we try to build something new from there. With Pandamonium the obvious choice was to make a strip club-set slasher. So the first thing I did was look at how we could do something different, while adhering to the spirit of this type of film. So, I started to think, “Where else would we find strippers?” The first idea that struck me was ‘Office Party’. I liked the idea of setting a slasher in an office after hours, because it was something that I felt most people could relate to — being in a busy place that was very suddenly deathly quiet.

This time, we made a conscious effort to lean a little more into the comedy, without going full slapstick. My biggest concern was, a film about a Panda Headed serial killer, could easily be derailed if we took it too seriously. However, we also always like to have some kind of message within these films. And Pandamonium seemed a perfect soap box for me to talk about the exploitation of women in the workplace, in terms of the strippers and the Office Junior and heroine Arielle. 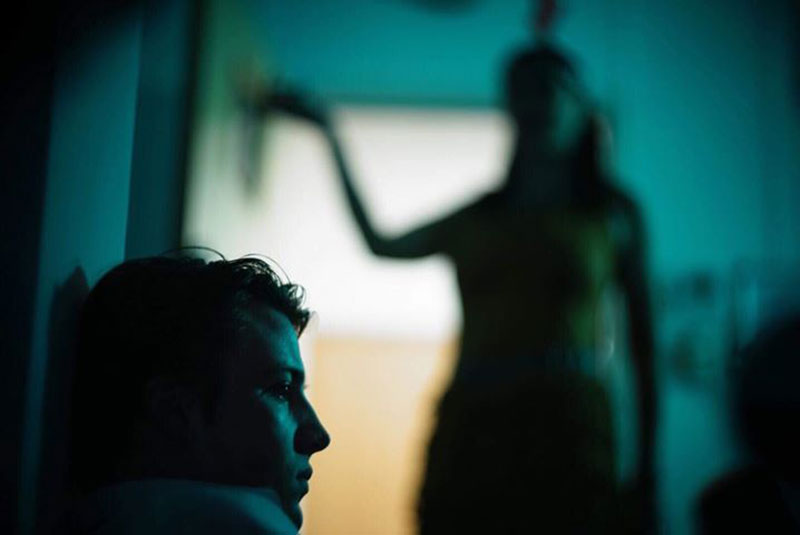 For me, personally, this feels like everything that I’ve always wanted Mycho films to be. Having something to say, while also having fun with the horror elements of it. This particular time, I feel like we balanced it all perfectly. But of course, we’ll have to see how the audience receives it.

2. The Stripper Ripper is the latest horror character from Slasher House 2 who has been given a standalone film. What made you choose the Ripper as the latest character, and what makes him unique?

When we were making Slasher House 2 (2016), I still wasn’t quite sure who would get a standalone film. After shooting the scenes with Molly Bannister (Tiana Rogers), that became a no brainer. But we really didn’t know who else would get one, if anybody.

Dave Hon Ma Chu was a late casting, as he replaced the original actor playing Jacob last minute. And it wasn’t until I heard him speak on set for the first time that I knew his character had something unique. It was a little like Cleaver from the first Slasher House (2012), They were written as very standard, run of the mill villains who were basically meant to be killed off. But once they came to life on screen, I knew that there was something special about them. 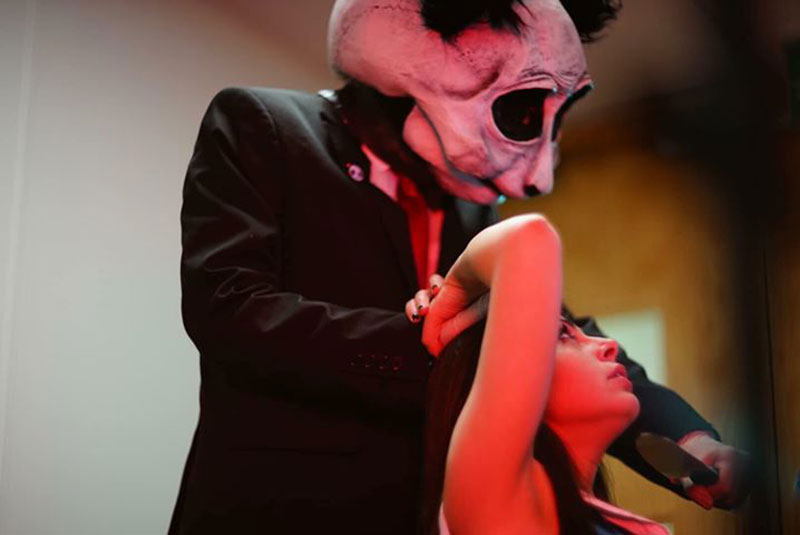 With Jacob, I knew that his thing was Strippers. But that was originally just a plot point for Slasher House 2. I had to use that to move forward with the solo movie, and that made it tricky. You can’t have free reign when you’re writing a new adventure with the character. You have to stick the rules you’ve set up.  But I found leaning into that very freeing as a writer. I think Jacob brings a coolness to the Killers of the Mycho Universe. Characters like Thorn are the brutes, and Cleaver and Prankster are the maniacs. But Jacob brings an almost James Bond style coolness to the franchise, and it really sets him apart from the other villains we’ve seen so far.

3. The film brings together some familiar faces from the Mycho Universe as well as some new faces. Who do you think really stands out in the film?

It’s hard to pick one person. We worked very hard balancing the right cast and mixing old school supporting players with new cast members. I think from a writer’s standpoint, Jasmine, the leader of the strippers, was a lot of fun to write. And we write her specifically with ‘Scream Princess’ Dani Thompson in mind. We were lucky enough to get her on board. I also loved writing Carol from HR (played by genre regular Charlie Clarke). She was written in originally as just a random death. But I loved writing for her character so much that she ended up with much more to do in the final film. 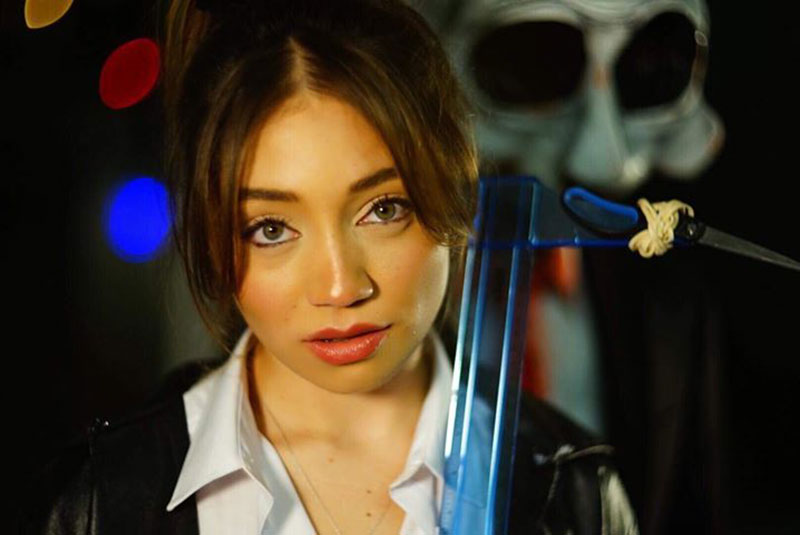 I always have a soft spot for the leads in our movies. And Oriana Charles really brings Arielle (the film’s heroine) to life in such a string meaningful way. It really hammered home the more personal elements of the film, and she balanced the character’s transformation perfectly.

It was also fun to just bring together people who I knew would work well together. I’d wanted to put Derek Nelson and Will Marshall (both Mycho regulars) in a scene together for a while, and it really worked. Within an hour, it was like they’d known each other forever. It really leant itself to the performance. But honestly everybody brought their A game, from the old cast to the new. They all just smashed it to pieces. I think every one of them stands out.

It was actually one of those rare shoots where it was a bit of a breeze. It was still tough. We had the usual long nights, and we got very little sleep. It also wasn’t without its share of location issues. We had little control over the lights in the building, which was a huge issue. However, as shoots go, the cast and crew made our job so easy and so much fun. It was a joy to be there every day. 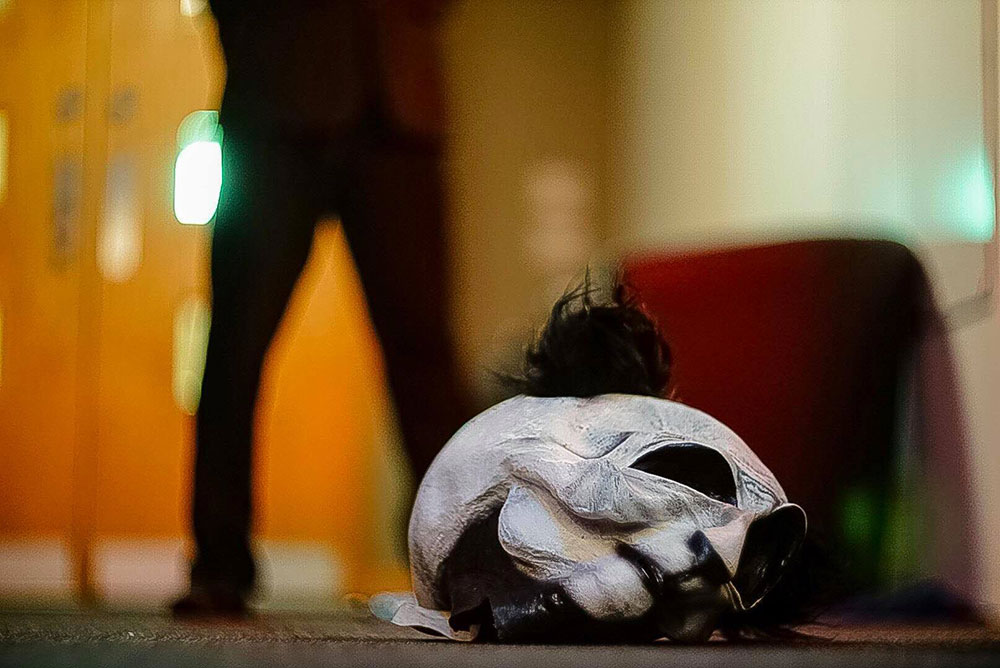 What’s more, it was the kind of luxury locations that you hardly ever get — air conditioned, and not some cold graveyard in the middle of nowhere. Honestly, it was just nice to be able to concentrate on shooting and not worrying that everyone was freezing to death or cooking under the midday sun. It meant that we could really just focus on the work.

That said, there was a day when we were halfway through shooting a scene. The next day we came back to find they had built a wall in the middle of the space we were using. Like a HUGE, PERMANENT WALL!!! It was a nightmare. But we figured out a work around in no time. And it actually made one of the deaths that was supposed to take place there waaaay funnier as a result. 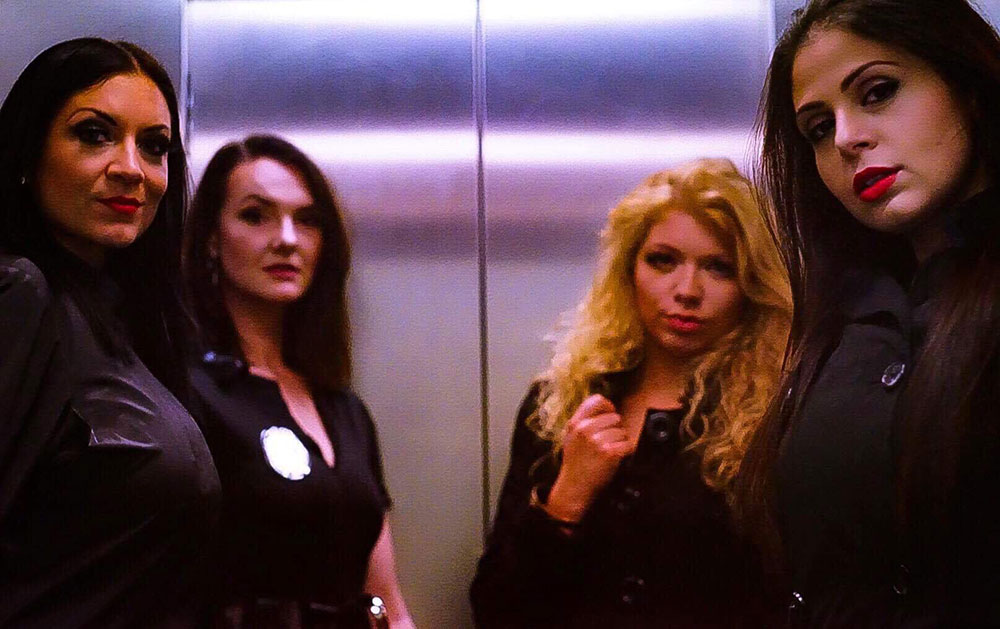 5. When can we expect to see Pandamonium released?

That’s the million-dollar question. We’ll be having the usual Premiere at Horror-On-Sea in January if they’ll have us back. But outside of that, we just don’t know. This is the first time we’ve signed a Pre-Production distribution deal, which means that it already has a distributor before we’ve even made it. So they’ll decide when it comes out once it’s finished. But the plan seems to be for some time next year.

6. What can we expect next from Mycho Entertainment?

A child. Our first baby is due out June this year. So we’re taking a couple of months to focus on that and make sure it comes in on time and under budget.

In terms of movies, I wanna talk about it, but I can’t. We’ll be unveiling it later in the year along with some other stuff. But I can say, the next feature from Mycho is the biggest thing we’ve ever attempted, like HUGE in terms of scope. It easily the most complicated project we’ve ever tackled. But we can’t wait, and it gonna change the Mycho Universe forever. 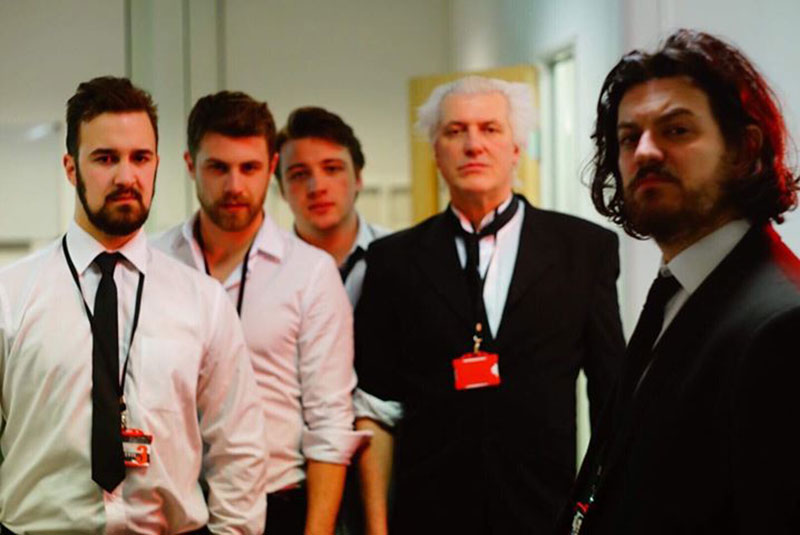 Outside of that, we just signed a deal for four of our films to get a wide release. Cleavers: Killer Clowns (2019) is getting DVD release in the US and UK in August. And Mask of Thorn (2018) and Bannister Dollhouse (2019) shouldn’t be too far behind. Then, of course, we’ll have Pandamonium next year.

Also, we have the our Mycho Patreon, where we have some very cool short form films. These continue the Mycho Universe in short films, mini features and a web series. You can find and support our Patreon at http://patreon.com/mycho.