Equal parts mesmerizingly beautiful and unflinchingly grotesque, “Titane” shocks as much with its tender poignancy as its visceral horror.

Titane (or Titanium in English) is the highly anticipated sophomore film from French filmmaker Julia Ducournau, who previously astonished genre audiences with Raw, the coming-of-age cannibal film that won the coveted FIPRESCI prize at the 2016 Cannes Film Festival. Premiering Titane at the 2021 Cannes Film Festival, Ducournau once again stole the spotlight by taking home the festival’s highest honor, the Palme d’Or, the same prize Bong Joon-ho’s Oscar-winning Parasite took home in 2019. Ducournau is only the second woman director to have received the coveted award.

If you think you know what to expect from Ducournau after Raw, think again. There’s really no way to prepare for the immersive mindf*ck that is Titane. And the less you know about it going in, the better.

As problematic as the term elevated horror is, invoking it here does help set the most modest of expectations among the trepidatious filmgoer. Like most transgressive art, it’s deeply polarizing. Even among the niche-loving Fantastic Fest audience, where I was fortunate enough to screen this one, reactions were mixed.

Ducournau herself revealed during the post-screening Q&A that she had little interest in providing the viewer with easy answers.

This is a film meant to be experienced rather than just watched, and that makes for a dazzling but disorienting cinematic affair. 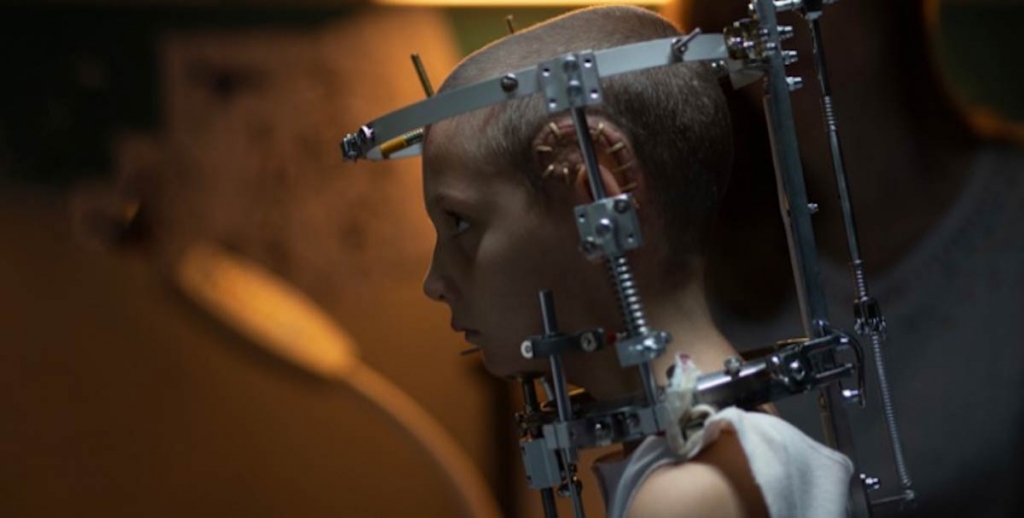 Comparing a film this startlingly original to other films always feels reductive, but it may help you gauge the mileage you can expect to get out of Ducournau’s strange, subversive, and sublime sophomore outing.

Titane wastes no time revving the audience up for an unforgettable ride.

We meet a young Alexia in the backseat of a car. As she entertains herself by emulating the sounds of an engine, her irritated father (a cameo by director Bertrand Bonello) loses control of the car and violently crashes into a concrete wall. Cut to the hospital where Alexia has undergone life-saving brain surgery, leaving her with a titanium plate in her head and a large, swirling, snail-like scar around her ear (the evocative design of which was inspired by Ducournau’s love of Vertigo).

Her cold and distant parents are warned to look out for any neurological side effects, a wink and a nod to the audience as Ducournau braces us for the hellacious road ahead. 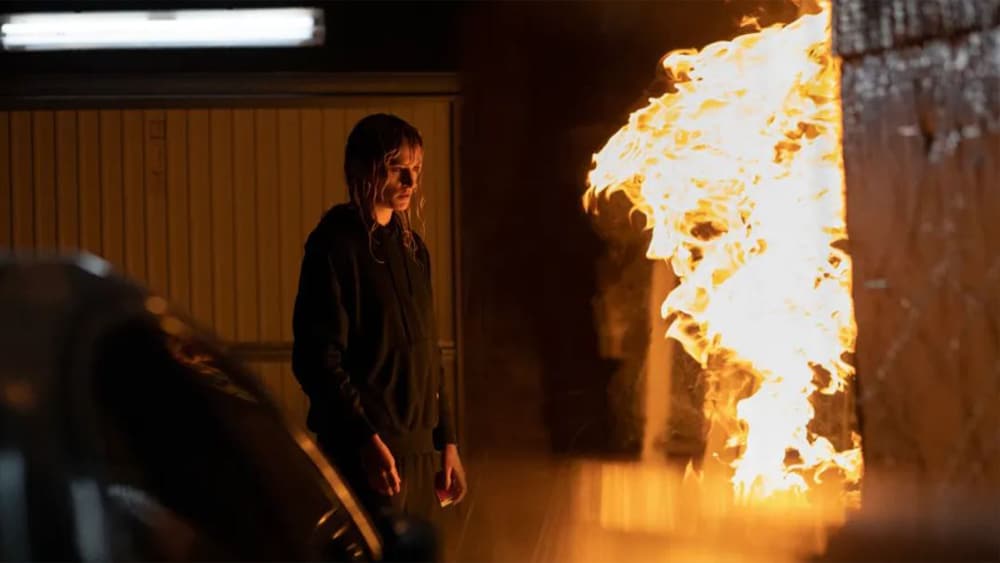 Fast forward to a now 32-year-old Alexia (played by extraordinary newcomer Agathe Rousselle). We first meet adult model/dancer Alexia playing up her feminine sex appeal and alluring, punk rock edge at a highly fetishized automobile trade show, where we see her writhing and grinding on a Cadillac in latex and fishnets as she’s ogled by (predominantly male) onlookers.

One night after a gig, a particularly overzealous male admirer follows her out to her car and professes his love for her. When he tries to solicit more than an autograph, Alexia coolly removes a metal pin from her hair and shoves it into his ear canal. By any rational measure, it’s a profoundly traumatic event.

But for Alexia, it’s mere foreplay — leading to the film’s most jaw-dropping scene, an unconventional sexual encounter that sets the stage for more mind-bending twists and turns.

What follows is a garish pileup of sadistic and oddly comedic violence, where it seems Alexia’s traumatic brain injury has left her a psychopathic killer, devoid of empathy and impulse control. After a particularly brutal bloodbath, she sets fire to her childhood home, with her parents locked inside, and goes on the run from the authorities.

From here, the film dramatically changes gears as Alexia assumes the identity of a long-missing boy named Adrien. 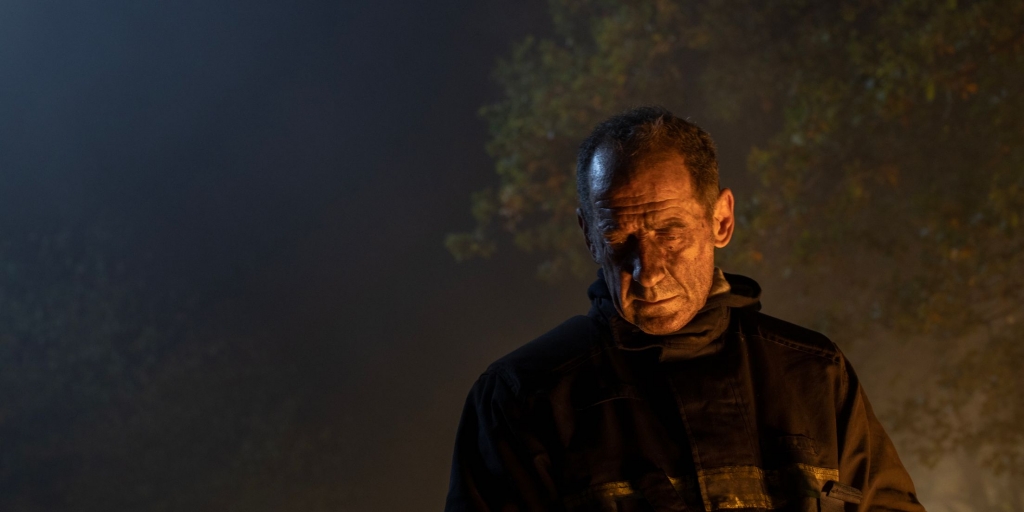 To carry out the ruse, she cuts her hair, binds her breasts, and aggressively breaks her own nose during one, particularly nasty scene.

Adrien is the son of an aging fire chief named Vincent (veteran actor and French superstar Vincent London). A decade after his disappearance, Vincent clings to hope that his son is still alive. Without hesitation — and refusing a DNA test — he fully embraces the imposter and welcomes Alexis (as Adrien) into his home and his fire station family.

As Alexia tries to keep up the increasingly impossible charade, she abandons the shackles of her overtly sexualized femininity and enters a world of performative hyper-masculinity, with Vincent serving as the alpha male — injecting steroids daily to try to halt the aging process and maintain his bulky, imposing frame.

There’s very little dialogue in the film. Instead, aided by a pulse-pounding soundtrack and a hypnotic score from Jim Williams, and shot with exquisite finesse by cinematographer Ruben Impens, Ducournau uses the language of dance and movement to express emotions where words would simply fall flat.

Titane is fantastically gory and uncompromisingly visceral, but there is far more under the hood than just shock and awe.

The engine of this ferocious film is a surprisingly moving story about what it means to be human and our universal need to connect with others; to be accepted for who we are, even if we are still searching for the truth of our own identity.

Alexia begins the film as more machine than human, existing in a world devoid of love and emotional connections. Consumed by a world of loneliness and violence, she’s a force of nature hiding vulnerability beneath an impenetrable steel barricade.

As surprising as this film is at every turn — a Grand Guignol of subersive social commentary, dark humor, brutality, and body horror — what’s most surprising is that which ultimately crashes into those barriers and fuels Alexia’s hidden humanity: love.

As Ducournau explained in the Q&A, she required complete trust and complete surrender from her leads in order to bring her singular vision to the screen. Fortunately, both Rousselle and Lindon were willing and extraordinarily capable passengers on the surreal journey that demanded both tremendous physicality and emotional depth.

Rousselle, in her first role, is astonishing, conveying a range of complex emotions in a nearly wordless performance. 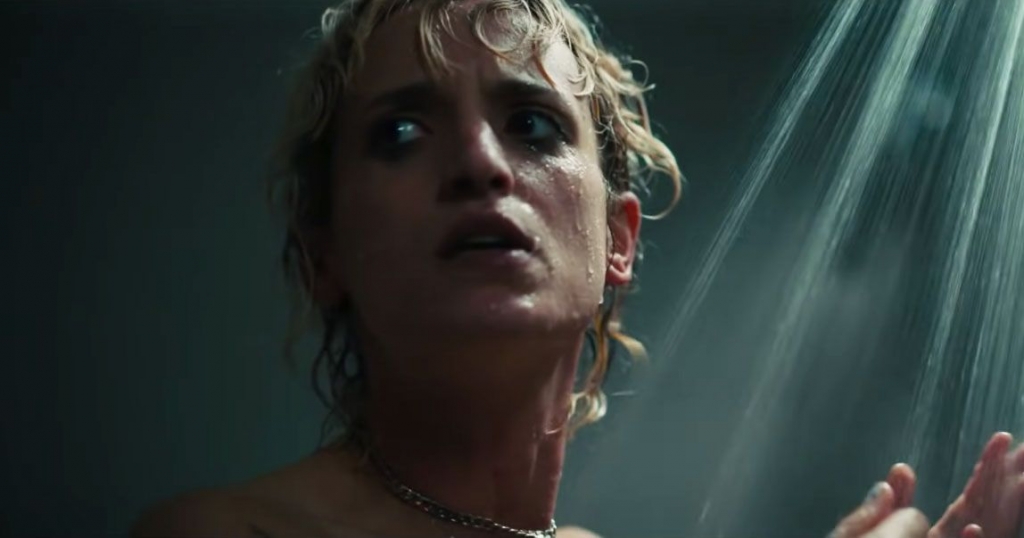 Lindon, in his first foray into genre films, is equally outstanding as Vincent, Alexia’s protector and intellectual sparring partner, the fire to her metal. He delicately balances brash machismo and disarming tenderness.

When these two dynamic forces collide, under Ducournau’s audacious direction, it’s explosive and undeniably riveting, giving birth to something both monstrous and beautiful.

Titane is now playing in U.S. theaters nationwide (as of October 1st, 2021). And it’s a film that truly needs to be experienced on the big screen with sumptuous surround sound.

I’m purposely omitting some salacious plot details from this review because Titane deserves to surprise you. And surprise you it most certainly will.