With a menacing masked killer and an enjoyable cast, The Wicked One is a satisfying love letter to old school slasher films…and a ‘wicked’ good time! 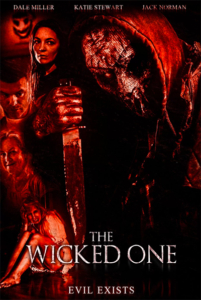 I’ll admit I have a real soft spot for slashers, especially those with old school sensibilities reminiscent of the classic hack and slash films of the 70s and 80s. Rarely, however, does a modern slasher come around that manages to be memorable or leave viewers hungry for more.

Fortunately, The Wicked One is a refreshing change of pace that rises above most generic, low budget fare.

The Wicked One is a new horror film from Jonestown Films & Studio 605. The film marks the directorial debut of Tory Jones, which he co-wrote with Cheyenne Gordon. It premiered at Fright Night Film Fest where it took home 6 awards, including Best Kill, Best Score, Best Audience Reaction, and Best Emerging Filmmaker.

THE WICKED ONE follows a group of friends who are hoping for a fun filled Halloween weekend getaway, only to find themselves in the cross hairs of one of the most dangerous and prolific serial killers in history. It feels like a true labor of love, especially considering the film had to be completely reshot following serious production issues back in 2014.

The movie starts off with a bang, given us an early glimpse of the moment the loving, unassuming boy-next-door Colin Miller snaps and becomes the titular character, The Wicked One. After hearing a voice from an evil entity only he can see, Colin goes on a brutal murder spree starting with his own family. He eventually ends up in a maximum security prison for the most dangerous and criminally insane offenders.

Of course, because this is a horror movie, The Wicked One escapes to return home and wreak havoc on the town, including a group of friends who have come for the Halloween festival Wicked Fest. The group includes a brother and sister who just happen to share the same childhood home as Colin Miller. The promoters of Wicked Fest use the legend of The Wicked One, the town’s infamous serial killer, to promote their event—a fact that doesn’t set well with the killer.

It actually looks quite good for such a low budget affair. While it does get a little dark at times, there are some truly impressive shots that showcase the exceptional cinematography. The score is excellent, and the acting is pretty solid. There is even some well executed humor throughout that never takes away from the horror but adds a depth typically missing in most slasher films.

This film manages to do something quite well, which most other films in the slasher sub genre fail miserably at — creating likable and engaging characters.

The Wicked One is intended as a love letter to the slasher films of Jones’ youth, especially John Carpenter’s Halloween.

The serial killer known as The Wicked One bares many similarities to the iconic boogeyman Michael Myers. He’s a hulking, silent killer with supernatural strength who feels safest behind a mask. He begins as an innocent young man who snaps for unknown reasons, killing his family and focusing much of his rage on his sister. He ends up in a maximum security prison but eventually escapes; returning to the home of his youth to seek vengeance on Halloween night.

The adult Colin Miler/The Wicked One is played by Jack Norman. Like Taylor Mane in Rob Zombie’s Halloween (2007), he’s huge and believably menacing without saying a word — a near 7 ft killing machine. He does a great job acting with just his physical presence and movement. Sporting a creepy burlap scarecrow mask and a huge bowie knife, Norman masterfully brings to life an iconic killer for the modern age, following in the footsteps of Michael Myers and Jason Voorhees.

In the interest of being fair and balanced, I’d be remiss if I didn’t point out that this is not a perfect film. While there was a lot to like, not everything works. There’s some inconsistency in tone, scenes that feel out of place, performances that don’t quite land, and overly derivative plot developments. The beginning is stronger than the end, and there are some problems with pacing. Much of that can be forgiven as tropes of the slasher sub genre, and other problems seem less glaring considering the limitations of the budget and the challenges of first time filmmaking.

With that said, the movie (for me) succeeds more than it fails. And it does a great job showcasing the potential of up-and-coming filmmaker Tory Jones. Rumor has it a sequel is in the works, and I’d be eager to see where Jones takes this potential franchise.

While flawed, this was a fun watch that felt creative enough and smart enough to separate itself from a pack of hollow, inferior attempts at reviving the heyday of the slasher film. I’d definitely put both this film and this filmmaker in my list of ‘ones to watch’.

The Wicked One is the first film to be distributed by Petri Entertainment’s (The Funhouse Massacre, Badlands of Kain) new genre label Dark Cuts. It will be available via DVD and VOD on April 23rd.