We continue our recap of the entire Riverdale series with episodes 12 and 13 of the first season, “Anatomy of a Murder” and “The Sweet Hereafter”.

Join us for our weekly recap of the entire Riverdale series, starting with the first episode of Season 1. This will be a bi-weekly column (every Tuesday and Thursday), with two episodes reviewed each time, until we get caught up with the latest season. Catch up on everything you might have missed using the links below, or just dive right into to episodes 12 and 13 (the season finale) of the first season of Riverdale.

Season 1
Episode 1: The River’s Edge
Episodes 2 and 3: Touch of Evil and Body Double
Episodes 4 and 5: The Last Picture Show and Heart of Darkness
Episodes 6 and 7: Faster Pussycats! Kill! Kill! and In a Lonely Place
Episodes 8 and 9: The Outsiders and La Grande Illusion
Episodes 10 and 11: The Lost Weekend and To Riverdale and Back Again

Episode 12: “Anatomy of a Murder” Synopsis 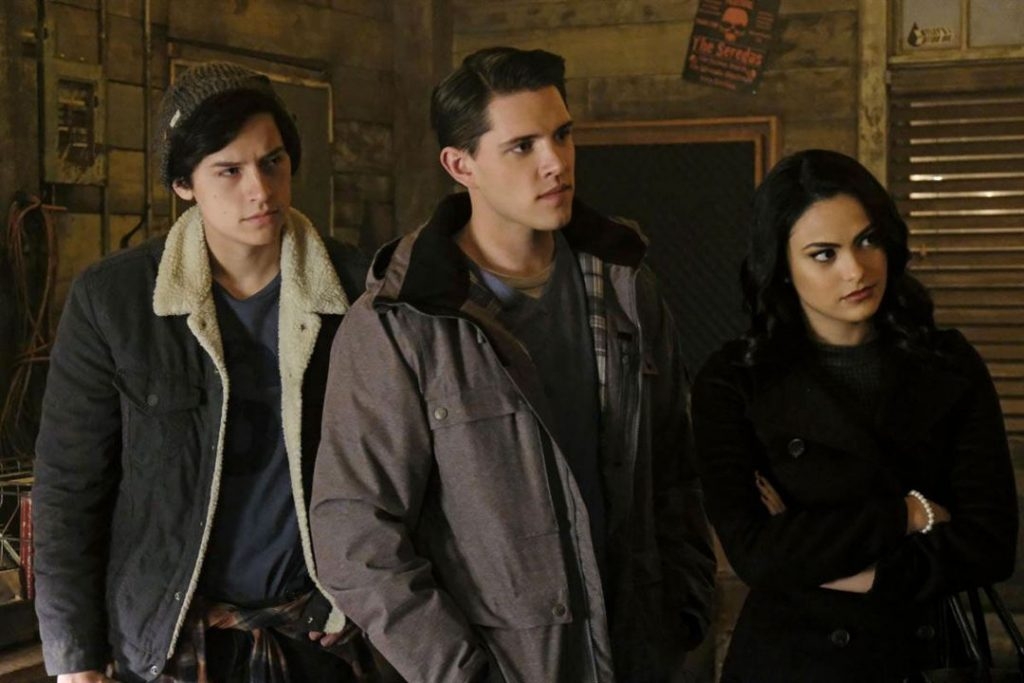 FP confesses to Jason Blossom’s murder, saying that he’d kidnapped him for ransom money and killed him when he made an escape attempt. In the wake of his arrest, Jughead has to deal with everyone’s eyes on him, Cheryl deals with the sensation that she’s not sure this is the end, and Archie has to choose whether or not he’s going to go live with his mother. It looks like the case is over when Hal breaks into the Cooper home to reveal to Alice and Betty that he killed Jason Blossom — and that the Blossoms and the Coopers are family. Polly and Jason were third cousins. Mary attempts to help Jughead, who comes to see his father and realizes that he’s innocent.

A duffel bag is found with Jason’s varsity jacket in it, one of the pockets containing a USB with the video surveillance of Jason Blossom’s murder. It reveals his true killer: Clifford Blossom, his own father. Hermione and Veronica reconcile, Archie chooses to stay in Riverdale, and the police come to arrest Clifford only to find him having hung himself in the maple syrup barn.

— Y’know how I said that I hoped a big twist of the final episodes wouldn’t be that Cheryl and her brother were a couple? Yeah, third cousins is still incest, so thanks Roberto. Also, called it.

— Rest in the pits of hell, Clifford Blossom. I won’t miss you. But also, Why would you put the surveillance footage in a pocket on your son’s varsity jacket? Is it a hubris thing?

— I hate Penelope Blossom so much. Is she going to be arrested for Jason’s death, because she had to have known it was going to happen? Even if not, Cheryl should probably be taken out of her custody.

— It’s good to see Kevin actually getting involved, but it’s a shame about his and Joaquin’s relationship falling apart. Hopefully, they’ll give him a new love interest in season 2. 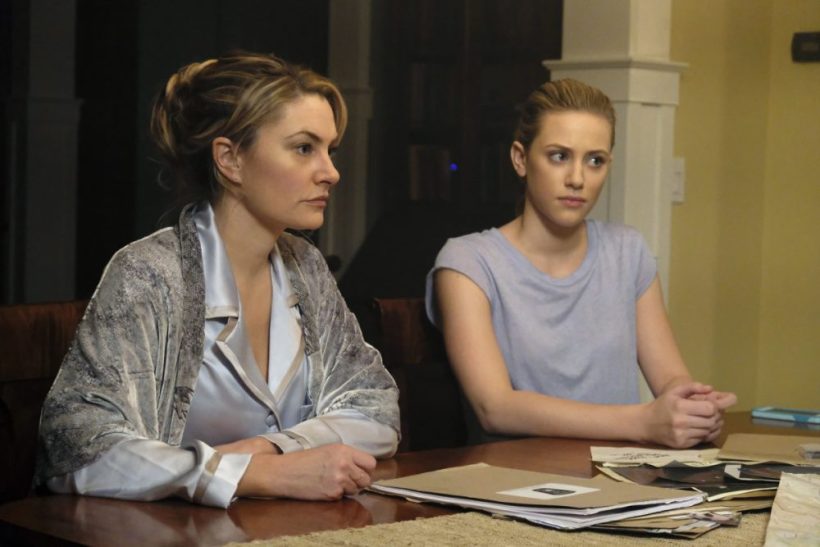 — Hopefully, under the circumstances, FP will get a light sentence for what crimes he did actually commit. Good to see him having some remorse for what he’s done to his son though. I wasn’t that moved, but there’s clearly some emotion there and Skeet Ulrich (Scream) is still a very good actor.

— How long has Polly been pregnant? Let’s just say it’s around early June that she got pregnant. She’d be six or seven months pregnant at this time (I’m pretty sure it’s December or January at this point, but this show refuses to give me an actual time line). What I’m getting at is that none of this stress can be healthy for her or those babies.

— None of this explains why Hal said he killed Jason. There was zero need for it, honestly. Here’s a fun fact though: the actor who plays Hal is also in a lot of Hallmark-knockoff Christmas films. It’d explain his wooden acting. 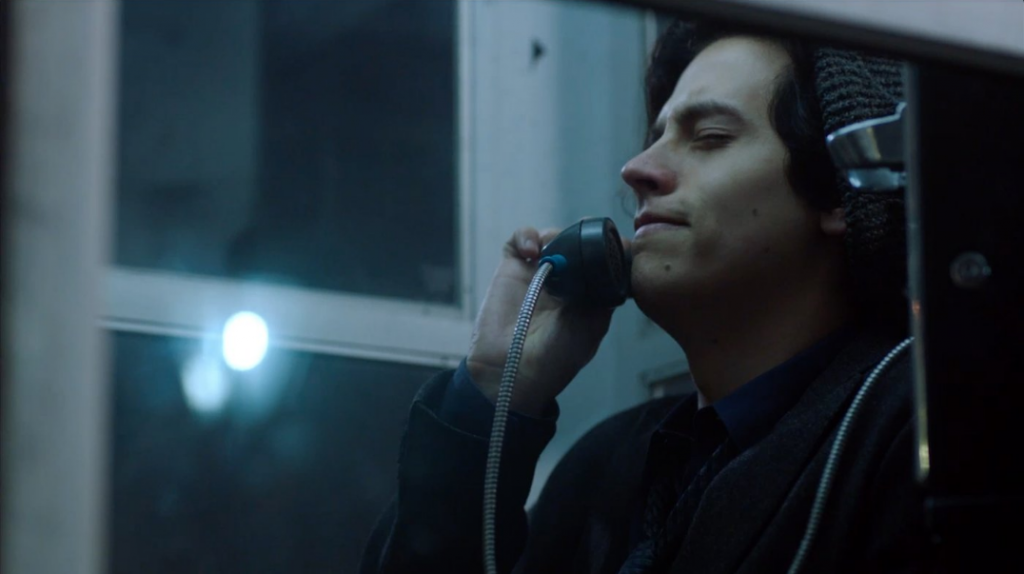 — It’s good that they got Polly away from Penelope. That woman’s a thousand pounds of bad in a Cruella De Ville package. Now, hopefully, when the twins are born, they’ll be far away from her.

— Where’s Nana Rose in all of this? Did she just disappear into the maple syrup mists?

— I liked the strange irony in the song playing behind Mary and Jugheads’ talk about FP at Pops being a song about coming together and being friends.

“Nothing could be more purely Blossom than those babies.” – Penelope. Ew. 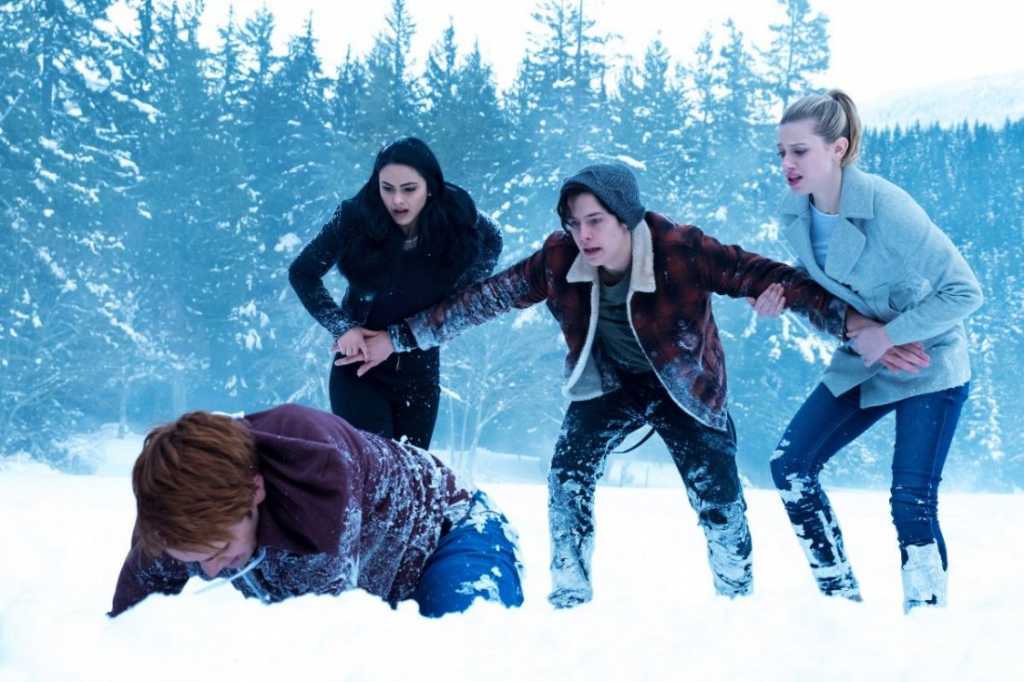 The whole town prepares for the jubilee, trying to raise up spirits after all’s been done with the Jason Blossom murder. It’s discovered that the maple syrup business was a front for putting heroin into America, and Jason finding out is why he was killed. The Cooper family tries to come back together, only for things to fall apart when Betty starts writing articles about the Serpents. She finally gets a full answer from her mother about the family secrets — in the form of the revelation that she has a secret older brother.

Jughead moves to the Southside after being taken in as a foster kid, and quickly settles in as a Southside Serpent — just as his father had been — as he and Betty continue their relationship. Veronica and her mother prepare for Hiram’s return while Veronica supports Archie. Cheryl finally breaks down and attempts suicide before being saved by the Core Four. She recovers enough mentally to return to Thornhill, only to burn it down in an attempt to cleanse.

Archie performs at the Jubilee after saving Cheryl, and goes out to Pops with his father to talk about something the next morning.  As he’s in the bathroom at the diner, a masked gunman comes in, threatens Pops, and shoots Fred in the chest. This is where the episode becomes a cliff hanger. 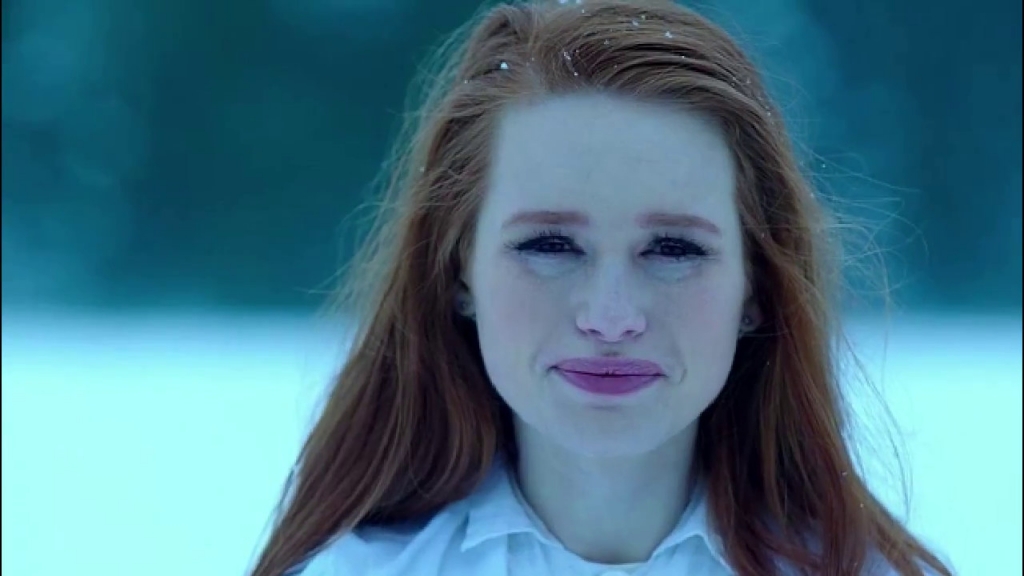 — When I said Cheryl should be taken out of Penelope’s custody somehow, her trying to drown herself in the Sweetwater River is absolutely not what I meant. Watching her burn down Thornhill was a wonderful sight though. It felt like a cleansing fire, like a pheonix rising from the ashes. Hopefully that means she’ll be a better person and a better character in the next season.

— Betty doesn’t really catch a break this episode until the end, and even then it’s only for a little bit. First the ‘Serpent Slut’ thing, Jughead considers leaving town before moving to the Southside, then she finds out that she’s got a secret older brother who was born while Alice was at the Sisters of Quiet Mercy, then her new cousin tries to kill herself in the middle of the Sweetwater River. It’s a lot on her. Poor girl.

— I still dislike Archie’s singing, but it’s much better when paired together with the vocal styles of the Pussycats. Also, I enjoyed Betty’s speech a lot. It’s good to see her acknowledging the good and evil of Riverdale all at once and calling for everyone to do better. I don’t know if that’ll happen though. 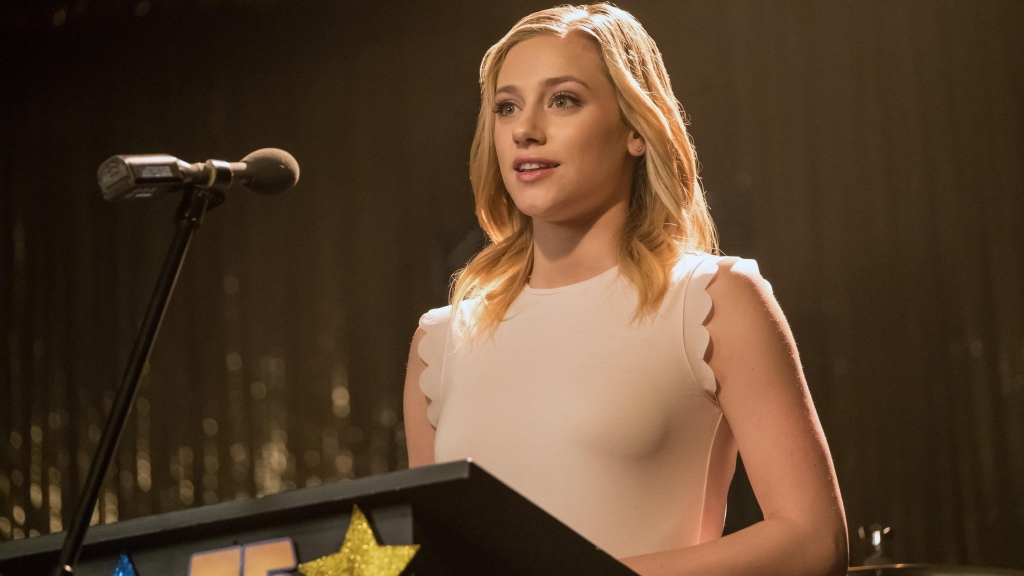 — I’ve just accepted that Archie’s never gonna go to therapy for what happened with Grundy. This show has essentially barred me from getting to see that happen, even though he clearly needs it even more now because his dad got shot.

— Fred’s going to pull through. I feel like Riverdale wouldn’t kill off two parents in such a short time. Big deaths like that need to be spaced out so it’s not just five tons of drama all in one fell swoop.

— Why does Jughead join the Serpents? Is it just because he wants protection now that his dad is in jail? I’m so confused by that. Also, why is it his responsibility to look after Jellybean and his mom? I thought they’d left town years ago and that was a big thing behind Jughead’s angst.

— Another question: why did Alice have Polly sent to the Sisters if she knew how creepy and bad they were from being there herself? Why did she think that would help? Was it mostly Hal’s idea? Why did FP, specifically, see the fight? 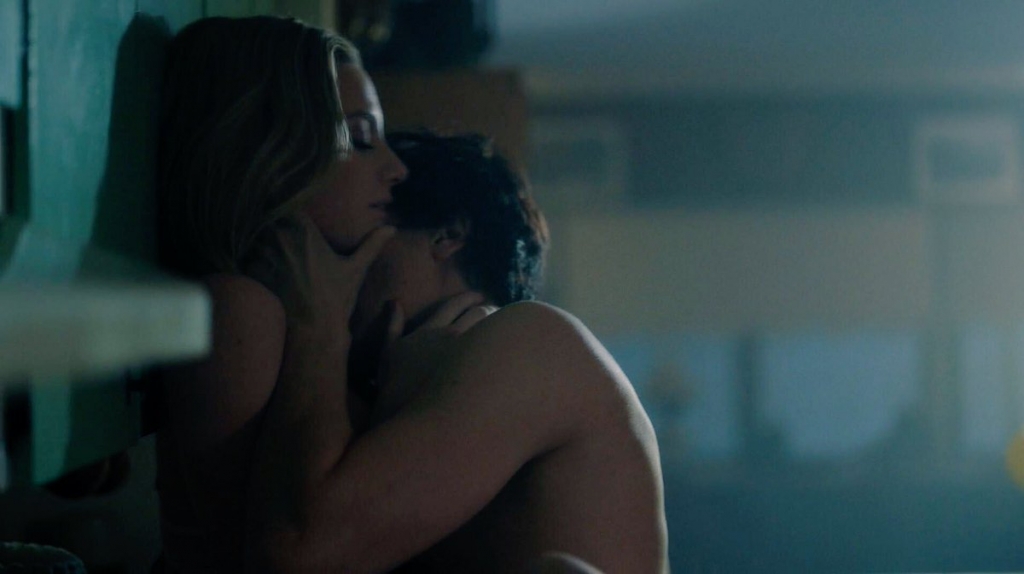 — I got genuinely so happy when Hot Dog showed up though. I already love him. If anything happens to him or Archie’s dog Vegas, I’ll be very upset.

— Are we finally going to get to see Hiram next season? Hopefully! I wanna see what Veronica’s dad looks like. I’ll probably dislike him a lot but still!

— I want a ‘Go to Hell, Serpent Slut’ button. Not a shirt, I’m not willing to buy a whole shirt for it, but a button would be neat.

— As many issues as this season has had, and there’s been a lot, I liked this season overall! Hopefully the next one will be even better. See y’all for the next round of the Revue!

“Betty, now that it’s just us girls, and at the risk of us failing the Bechdel test, are you legitimately cool with Archie and me? Swear on the September issue?”

“And on my copy of ‘Forever’ by Judy Blume.” – Veronica and Betty respectively.