We continue our recap of the entire Riverdale series with episodes 1 and 2 of the second season, “A Kiss Before Dying” and “Nighthawks”.

Join us for our weekly recap of the entire Riverdale series, starting with the first episode of Season 1. This will be a bi-weekly column (every Tuesday and Thursday), with two episodes reviewed each time, until we get caught up with the latest season. Catch up on everything you might have missed, including recaps for all of Season 1, using the links below — or just dive right into to episodes 1 and 2 of the second season of Riverdale. 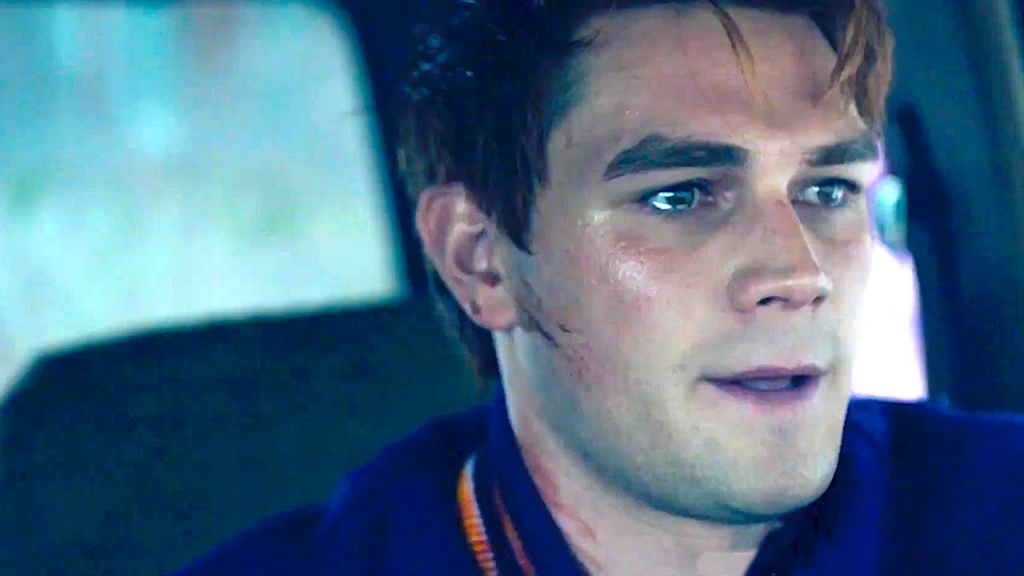 Fred is transported to the hospital, where he experiences a series of hallucinations while attempting to pull through. Archie, reasonably so, struggles a lot with the whole thing. He fights with Veronica, gets in touch with his mother, and tries to come to terms with the fact that his father might die. Fred pulls through and comes home, determined to protect his son whose promised the same for him to the point where he stays up at night with a baseball bat in hand.

Alice suspects that the Serpents are to blame for the crime, attacking out of spite since Fred had fired a lot of them from his construction crew before the attack, and it was shown that no money was taken from Pops. Jughead doesn’t really help with that since he goes to the Serpents looking for any insight. This results in the two serpents, one named Tall Boy and the other nameless, beating up a suspect and finding nothing in order to prove loyalty to Jughead since he’s FP’s son.

Veronica fights with her mother, accusing her of planning something against Fred, only for Hiram to return home and join them at Pembrooke. Jennifer Gibson/Grundy is killed by the Angel of Death/Black Hood in Greendale with a cello bow. 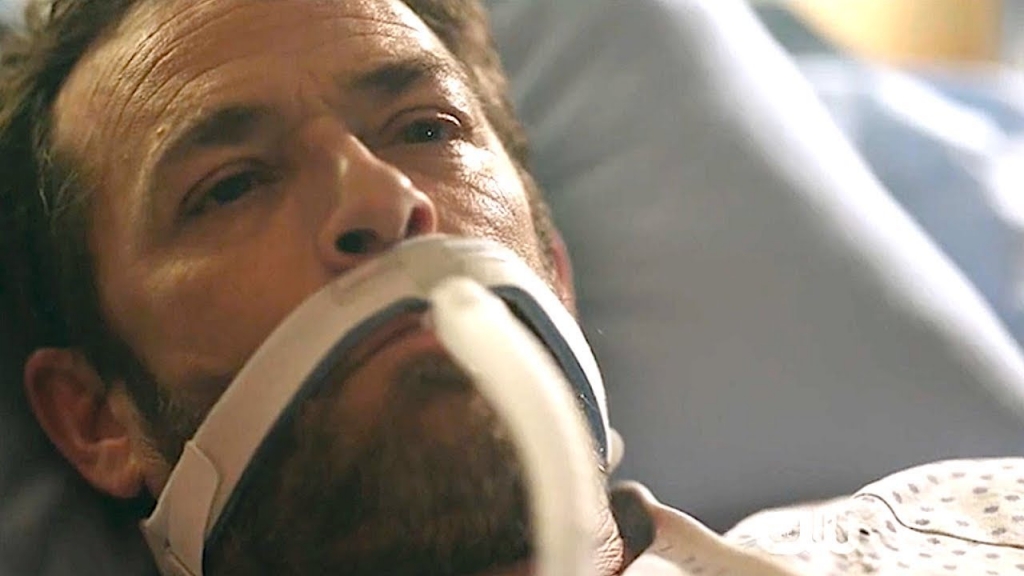 — First of all, welcome back everybody to the Sweetwater Revue! This season is twenty-two episodes long, so we have our work cut out for us!

— Fred being in the hospital lasted for a single episode, which kind of disappoints me. I’m happy that he pulled through of course, that’s what I’d predicted would happen in the first place. But it would have been interesting to extend that narrative through a couple more episodes — let Archie deal with the possibility of his dad dying over a longer period of time, let the hunt for Fred’s attacker be a potential one for his killer. It would have given some strong tension to the show.

— I didn’t like the hallucinations, personally. They gave a good insight into Fred’s mind while he was fighting to stay alive, but they just made me uncomfortable. It’s the same sort of feeling I got with Jughead’s 1950’s nightmare last season, but less so.

— I still don’t know how I feel about Archie and Veronica as a couple, but seeing her comforting him was very sweet. That being said, they’re both still underage in canon, and the shower scene was really weird. 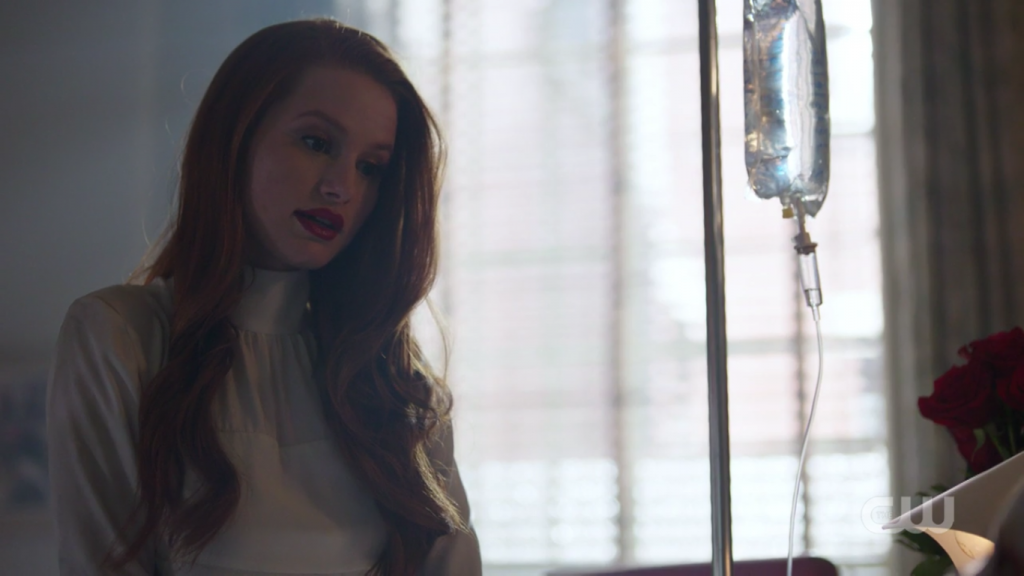 — Honestly, considering everything, I don’t blame Alice for being kind of wary of the Serpents and thinking that they might have had something to do with Fred getting shot. That could be the case, who knows? It’s not like that’d be the first illegal thing that’s been done in this show.

— Always good to see Vegas! I love that dog.

— Cheryl was so good this episode. Is the taunting of Penelope in a hospital bed a lot? Yes. Did I still love it? I sure did! Plus, her ‘kiss of life’ to Fred after Archie saved her life last season was a cute little gesture on her part.

— Welcome to the Riverdale Parents ranking, Hiram Lodge! You’re already pretty low on the list because of everything that you caused to happen from off-screen, but we’ll see if that changes!

— Also, Hermione threatening to slap Veronica made me kinda queasy, so she just dropped a lot. 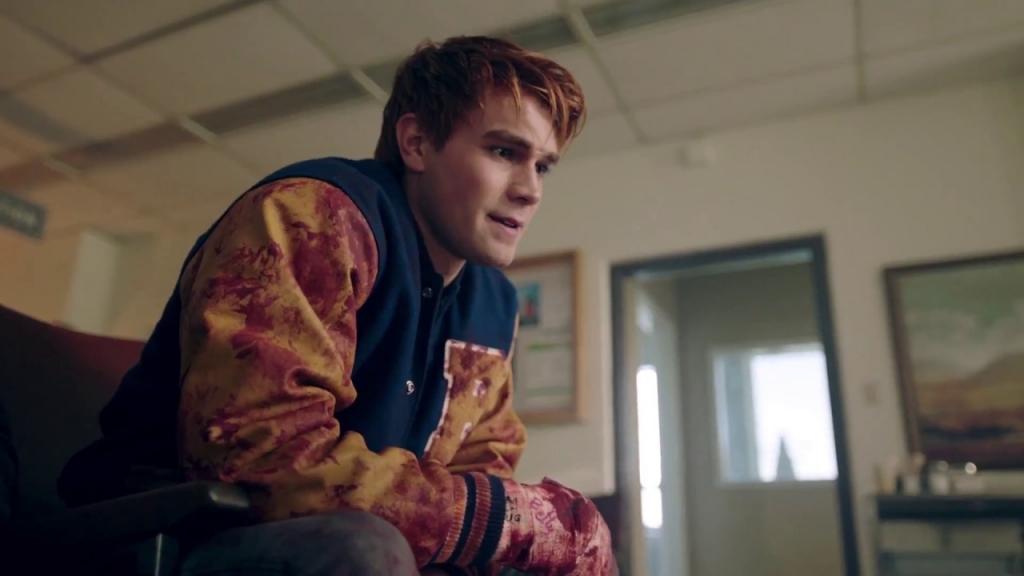 — Speaking of trauma, it’s good to see Grundy/Gibson be given a permanent out from the series, especially after it’s proven that she didn’t change a single bit from what happened last season! Good riddance, you creepshow!

— Right now I have no idea who the Angel of Death/Black Hood is. I don’t pay enough attention to the eye colors in this show, so he could be any older man on here.

— Riverdale Parents Ranking: Fred, Mary, Alice, Hermione & Hiram (tied). FP’s gonna be out of the ranking for a bit because of prison, and Penelope was silent this episode. She’s still at the bottom in general, but she didn’t do enough this episode to be on the ranking this time.

“Now, here’s the realz, Baby Jane.” – Cheryl. (As a fan of Whatever Happened to Baby Jane?, this line made me cringe so hard I think I chipped a tooth.) 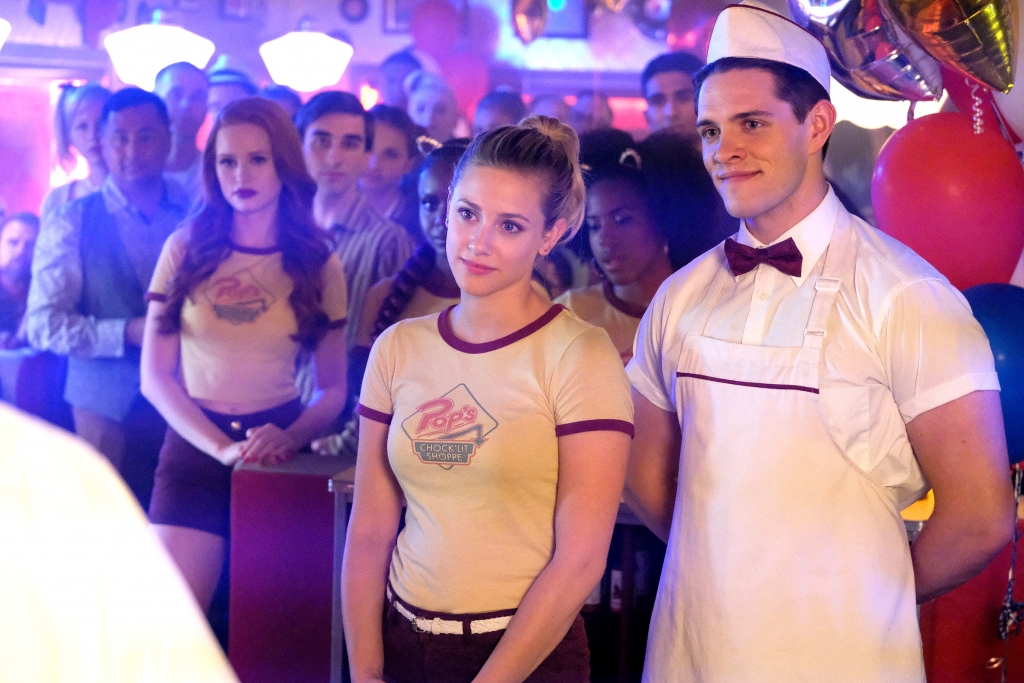 Vandalized and running out of money, Pop Tate prepares to shut down the town’s diner. Betty and friends, including the River Vixens and the Pussycats, attempt to rally the town to save a piece of its history like they couldn’t do with the Drive-In (after failing to get any support from Mayor McCoy). This succeeds, despite drug deals going on ‘right under her nose’ according to Betty’s mother, but not due to their efforts: the Lodges buy the restaurant in secret, allowing Pops to remain on as manager.

Archie, paranoid about his father’s attacker, has gone sleepless and terrified ever since his father came home — to the point where he attacks Jughead upon a surprise entry into the house. His paranoia is only solidified when he buys a gun from Dilton Doiley. Jughead’s not in a good place either, worrying for his father who’s been offered a plea deal. FP does contact his son though, warning him to not get involved with Penny Peabody.

There’s also a new drug in town called Jingle Jangle. Midge Klump, a student at Riverdale High, meets up with her boyfriend in the end to take the drug in the forest only for them both to be shot by a man in a  black hood. 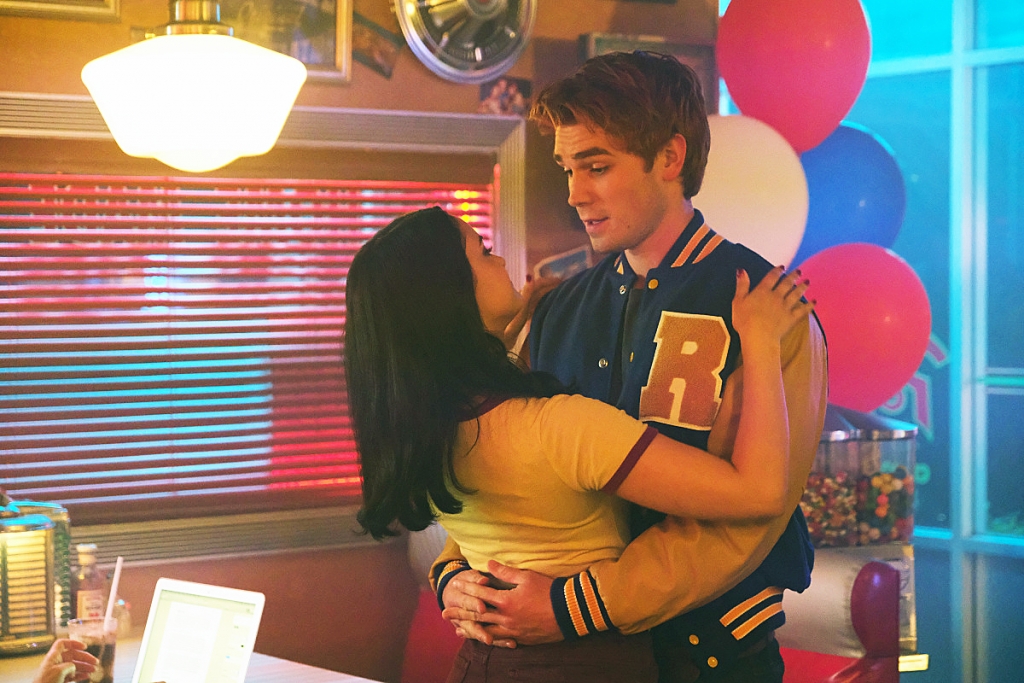 — I’m calling it now…if the show does a flash forward in the finale, there’s going to be someone showing people around a makeshift Death Diner for Halloween. There’s a reason why Bonnie and Clyde’s death car was so popular y’know. People love a little death in their tourism. Makes things interesting.

— Honestly, the juxaposition between the sweetness of the teens helping to keep Pop’s open and the fact that there’s another murderer on the loose feels like they’re repeating the Twilight Drive-in plot, right down to the Lodges being involved. It’s only the second season; we cannot be recycling plots like this already.

— Okay, so maybe showing her mother the video of Jason being killed was a lot too. I enjoyed Cheryl this episode, but that was a lot. I have a feeling there’ll be revenge on the horizon from Penelope for that once she’s all healed up. Still, listening to Cheryl mock Jughead and Betty for kissing in front of her made me laugh, and seeing her both perjuring to help her cousin and her boyfriend and operating as a Pussycat to replace Valerie was something sort of nice.

— I already don’t like Penny Peabody. She gives off weird vibes. She also kind of looks like Heather Morris from Glee but older, but that’s not why she gives me weird vibes.

— I have comments about names in this show. First off all, the gangster name Tall Boy isn’t intimidating. It’s really lame. Secondly, what kind of drug name is Jingle Jangle. I know it’s named after an Archie song, but normal drugs exist in this universe! The Blossoms were smuggling heroin, not Melody Hill or Senorita Rita! I can’t take a drug named Jingle Jangle seriously. Jingle Jangle is the name of a Trader Joes Christmas chocolate tin, not a hard drug.

— I liked Jughead and Veronica bonding in the Blue and Gold office. Was Jughead’s advice to her good? Probably not. But it was nice to see him at least trying.

— Reggie’s an asshole. That’s all I have to say, he’s just a giant asshole.

— How much money has Alice given Dr. Curdle by now? I want to know if she pays more in a night than the state pays in a week for him. I mean, getting to be that close to the autopsy reports — enough to release them in the news — has to cost a lot. Also, Alice is getting less and less likable by the episode. Blaming her daughter for something that isn’t her fault is par for the course for her by now, but I would have thought the entire last season would have done something to maybe soften her up a little. No such luck.

— The ‘Milkshake’ cover wasn’t my favorite, no, but it was thematically appropriate (kind of) and I can appreciate that. I did love hearing some hints of ‘Season of the Witch’ though, giving a nod to the Chilling Adventures of Sabrina series that was still producing the first season around this time.

— Guns are not a functional form of therapy, Archibald.

— Riverdale Parents Ranking: Fred, FP, Alice, the Lodges. Welcome back, slightly, FP. You get over Alice this time because at least you tried to warn your son instead of blaming him for something he can’t control.

“Oh, Betty. I did not emerge from the frozen depths of Sweetwater River, nor the flames of Thornhill, to allow my Vixens to sling milkshakes at some death curse diner. The answer is a double cherry on top ‘NO’.” – Cheryl. (Death Curse Diner would be an amazing band name though.)