Posted by:
Tags:  Archie Comics As Above So Below Roberto Aguirre-Sacasa Sweetwater Revue. Riverdale the CW The Midnight Club tv reviews

We continue our recap of the Riverdale series with episodes 3 and 4 of season three, “As Above, So Below” and “The Midnight Club”.

Episode 3: “As Above, So Below” Synopsis 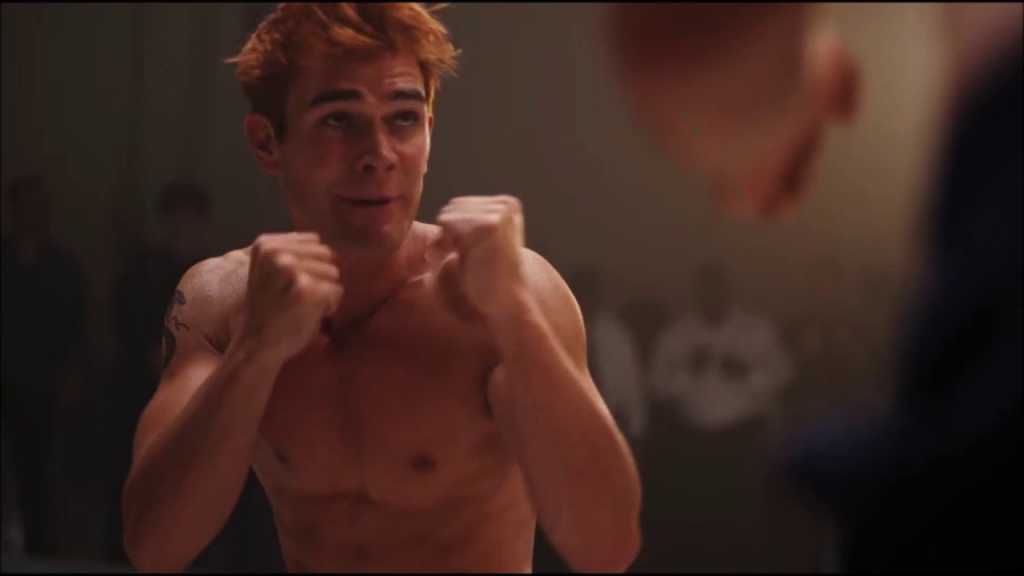 Archie, having spent over a week in solitary confinement, refuses to help Warden Norton and receives even more time in solitary. After Fred is unable to visit his son (his visitation privileges taken away after ‘starting a riot’), he promises to be in touch with lawyers. It’s then found that there’s an underground fighting ring in the prison  and Joaquin was shoved into the club after Archie refused to fight. Filled with guilt, Archie agrees and is trained by an inmate named Baby Teeth. He wins his first fight easily, but is encouraged to get ruthless and bloody and hold out the match longer by Norton. After an imagined conversation with his father, he allows himself to be beaten bloody for round after round before taking out his opponent with one punch. He finds a rock hammer left for him in Mad Dog’s clothes and announces to his prison friends that he wants to break out. Joaquin wants in.

Overcoming a series of roadblocks (including Penny Peabody extorting her for ‘protection’,  Jingle Jangle being placed in the speakeasy by her father, blackmailing her father for having a Jingle Jangle lab she found with Toni and Cheryl’s help and getting him to promise her ten thousand a week in perpetuity), Veronica opens her speakeasy to the tune of Josie singing ‘Anything Goes’, with Serpents serving drinks and Reggie helping as a bouncer. Hiram moves the drug lab.

Betty and Jughead keep trying to get Ethel to give them information on the game, even after she’s had a seizure. Ethel says that the point of the game is to become worthy of the Gargoyle King’s favor and scripture (aka the rule book of Gargoyles and Griffons). After rebuffing Betty, she tells Jughead to meet her in Dilton’s bunker. 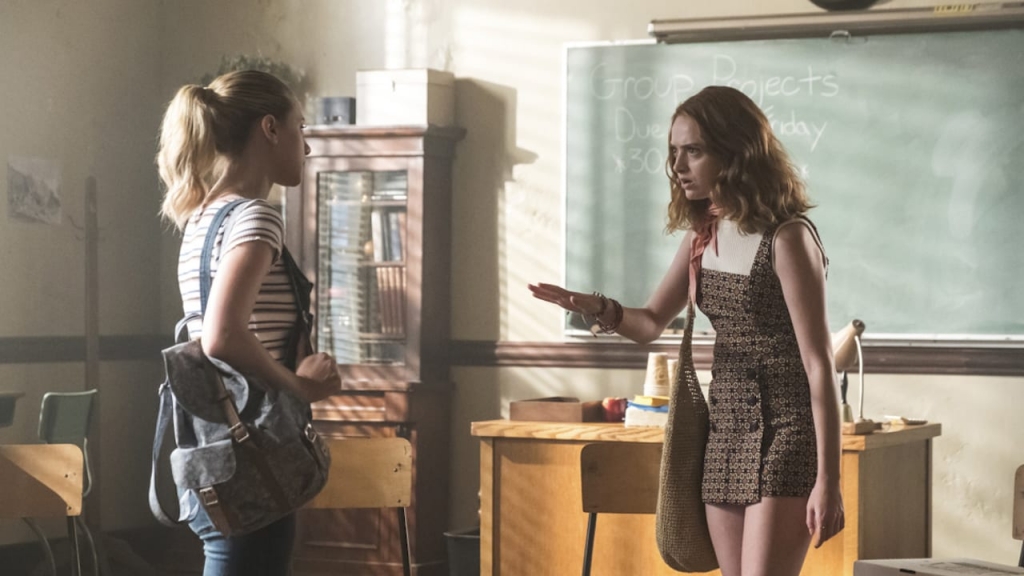 BETTY – Betty meets with Evelyn Evernever and ends up being invited to a Farm meeting with the promise of speaking to her father Edgar, who Evelyn says could help her with her seizures. This is a lie as Betty only gets to meet a few ‘Farmies’, the first tier on the riung to him. Alice told them all about the dead guy and Chic, and they also know about the webcamming thing. She discovers that Alice knew about the G&G game and when refused information almost faints. Alice repeats this refusal to tell her anything at first when they get home, saying that she trusts the Farm more than her daughter.

JUGHEAD – Jughead meets with Ethel and the two play a bit of the game, Ethel revealing that she was supposed to ‘ascend’ (aka die) with Ben but he betrayed her and ascended with Dilton instead. He drinks out of a griffon goblet, the other goblet filled with poison (after flipping a coin to see which he’d drink). For the rule book, he kisses her and then she proceeds to chug the poisoned Fresh-Aide. She ends up in the hospital, detoxing, and manipulates him into not making her tell her parents about the game.

FP and Alice find the rulebook and burn it, telling them that the game is evil. They go back to the bunker, believing that since the only rulebook is destroyed the game is done. That turns out to be a lie because Ethel made enough copies for the whole school. The episode ends with her bowing to the Gargoyle King. 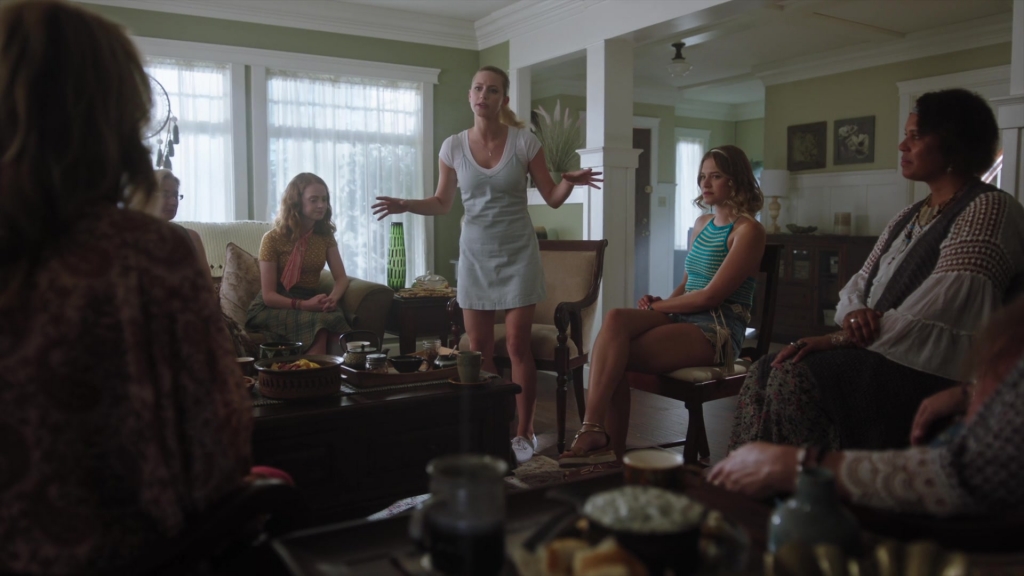 — Luke Perry recently passed away. You can read my eulogy for him here. Rest in peace.

— Trying to write down everything that happens in these episodes is getting harder and harder. This is going to be disjointed as hell, so here we go.

— I love chaotic Ethel, and Shannon Purser was spectacular, but I still hate this plot line so much. We don’t need it! We have fifty-seven other plotlines going on!

— For that matter, we don’t need the underground fight club! Just have Archie trying to break out!

— There was already so much going on that I couldn’t mention it, but I loved that Cheryl and Toni got involved in things. It was great, they’re great.

— If the Farm doesn’t end up being a Waco or Jonestown situation, I will be intensely surprised. 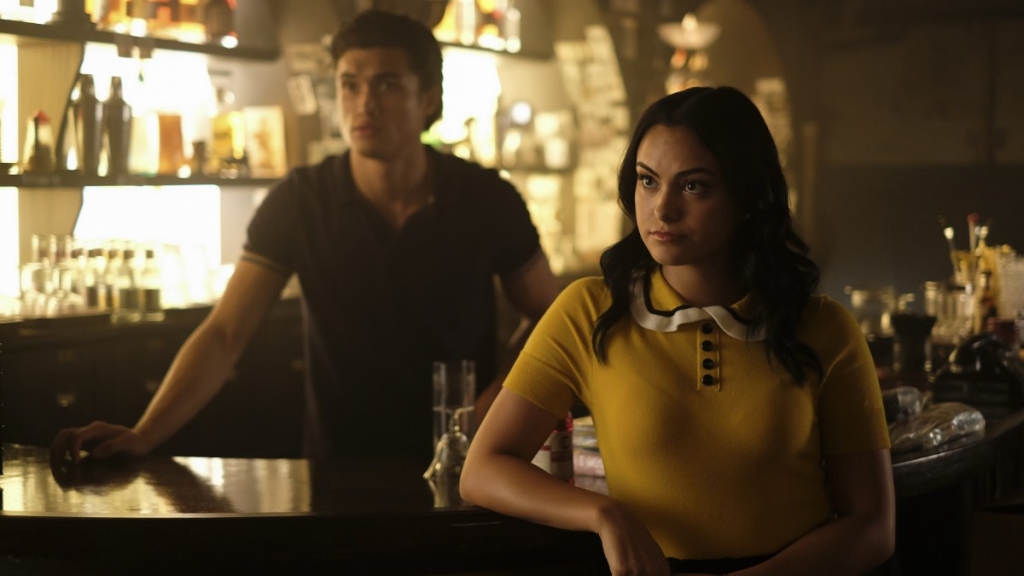 — All of the costumes in this episode were really good, especially the La Bonne Nuit outfits and Ethel’s princess gown.

— Does anyone else feel creeped out by the fact that Jughead and Betty are dating and their parents are having sex with each other, and by the fact that the show juxtaposes both couples lying in bed after sex, one after the other?

— Why did they have sex in the bunker? Multiple times???

— Riverdale, I am literally begging you to stop giving these presumably scary people stupid names. It’s not funny. You’re also not clever for playing Jingle Jangle while they raided the Jingle Jangle lab. We get it, it’s silly, we don’t need this.

— Why is Veronica allowed to have this stupid speakeasy?

Just the name ‘Baby Teeth’ for someone intimidating. Just…no. 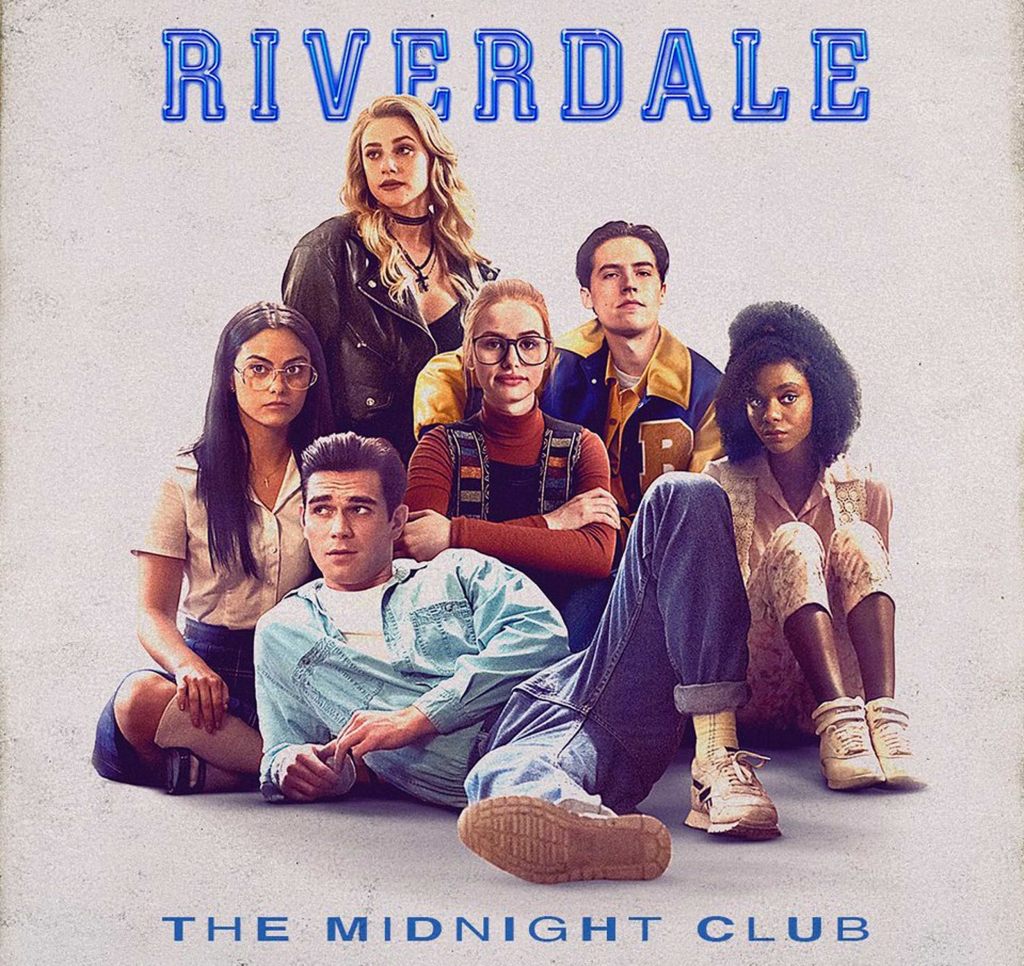 As G&G spreads (especially after being banned by Hermione Lodge), Alice finally cracks under the pressure and agrees to tell Betty what the game is after she’s given a case file by Dr. Curdle Jr. Most of the rest of this episode is one extended flashback.

After getting detention for a scuffle in the bathroom (the girls) and streaking (the guys), six students are all put in detention for eight hours: Alice Smith (the Bad Girl, newly pregnant), FP Jones (The Ladies Man, Alice’s baby daddy), Fred Andrews (The Artist/Athlete), Sierra McCoy (the Political Animal, dating Tom Keller), Hermione Gomez (the Rebelling Catholic), and Penelope Blossom (the Teacher’s pet, the one Alice fought in the bathroom for making a remark about Southsiders). Principal Featherhead leaves them alone to do a thousand word essay on why they’re in detention. After two hours of mostly silence, they agree to play a game of Secrets and Sins (truth or dare).

Through the game, it’s discovered that Tom and Sierra have been secretly dating for months under their parents’ noses, Hermione is dating Hiram Lodge so she can get out of Riverdale and achieve what her mother couldn’t, Fred reveals that he doesn’t know how to choose between baseball and music, Alice talks about setting a dumpster on fire in the Southside, FP reveals that his father hits him, and Penelope reveals that she was adopted by the Blossoms to be groomed to marry her brother Clifford. This revelation leads to the girls fighting again and Featherhead ups their detention weekends to four. 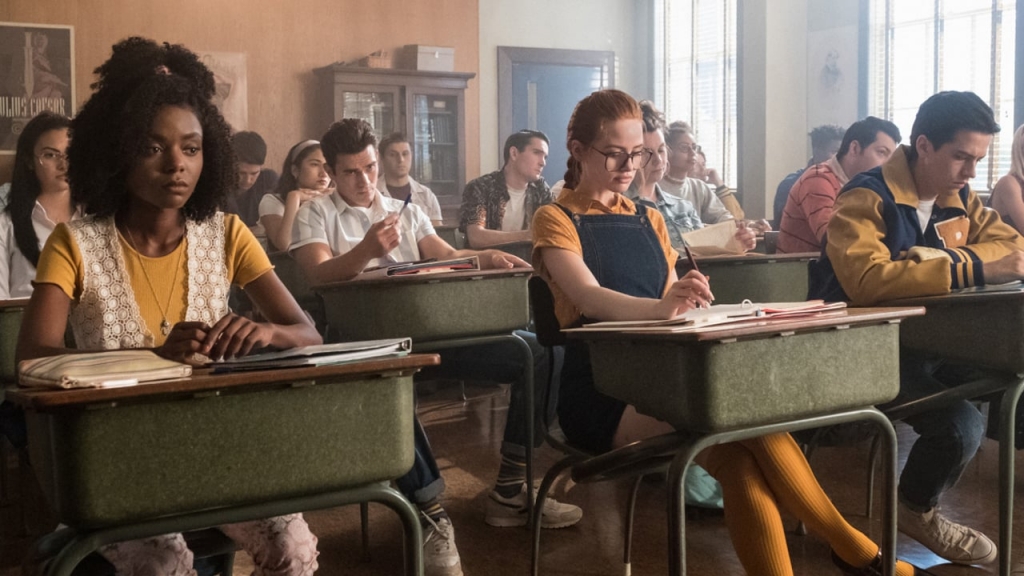 Over the weeks, the six become friends, find the guidebook for G&G and begin playing. Penelope sends them to find a gemstone she hid in the school, being the DM, and over the course of the quest FP and Hermione kiss (although she denies that she likes him), Alice almost tells Fred that she’s pregnant only to deny herself that and just say that she’s sad, and the two kiss.

The group form the Midnight Club and play G&G while sneaking into the school only for a second group (made of Hiram, Tom, Marty Mantle and Darryl Doiley) to find them. Deciding to ‘ascend’ (not die this time) all together, Hiram gets everyone high on a drug called fizzle rocks except for Alice who gets sick in the bathroom and ends up hiding out when Featherhead shows up.  The next day, it’s discovered that Featherhead is missing and Fred’s father is dead – something he knew was coming. It’s later revealed that he was poisoned and left for dead by drinking from the poisoned chalice. The Midnight Club disbands, swearing to never play the game again.

Betty finds proof of her mother’s story, rushing to warn Jughead only to find him playing the game with Toni, Cheryl, Sweet Pea and Fangs, having lost his mind. 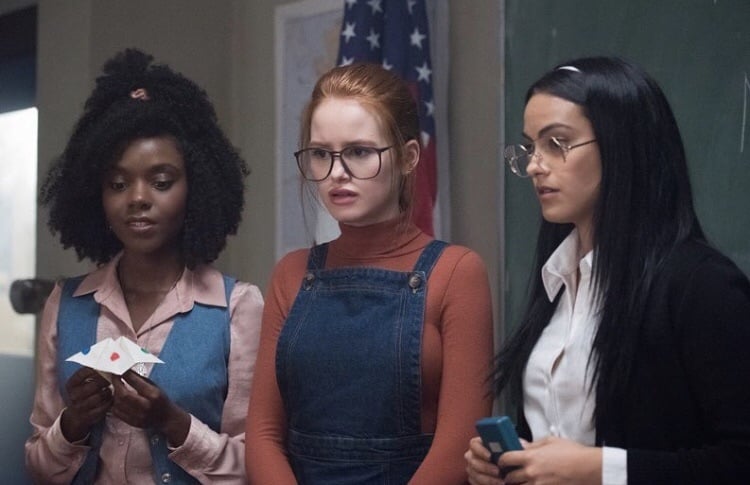 — Honestly, I commend the show for doing something fun with the flashback by having the actors play their characters’ parents. Everyone was fine, and I commend them. This was actually a really good episode, and I enjoyed it a lot. I still have some issues with it though, so hang tight.

— Not good to see Jughead giving into the G&G craze the way Ethel had and hauling all of his Serpent friends and Cheryl into it with him.

— Principal Featherhead was made for the show, and you still gave him that name?

— I loved the soundtrack, I’m a sucker for 80s music. The ‘Dream Warriors’ cover was kind of meh but they tried.

— So, what drug is Fizzle Rocks in the real world? Jingle Jangle is ecstasy and coke mixed together basically, so what’s Fizzle Rocks?

— I don’t think the timing works fully though. FP was born in 1970, so he should be twenty in this episode, and yet he’s still in high school with his pregnant FWB. That doesn’t work chronologically. 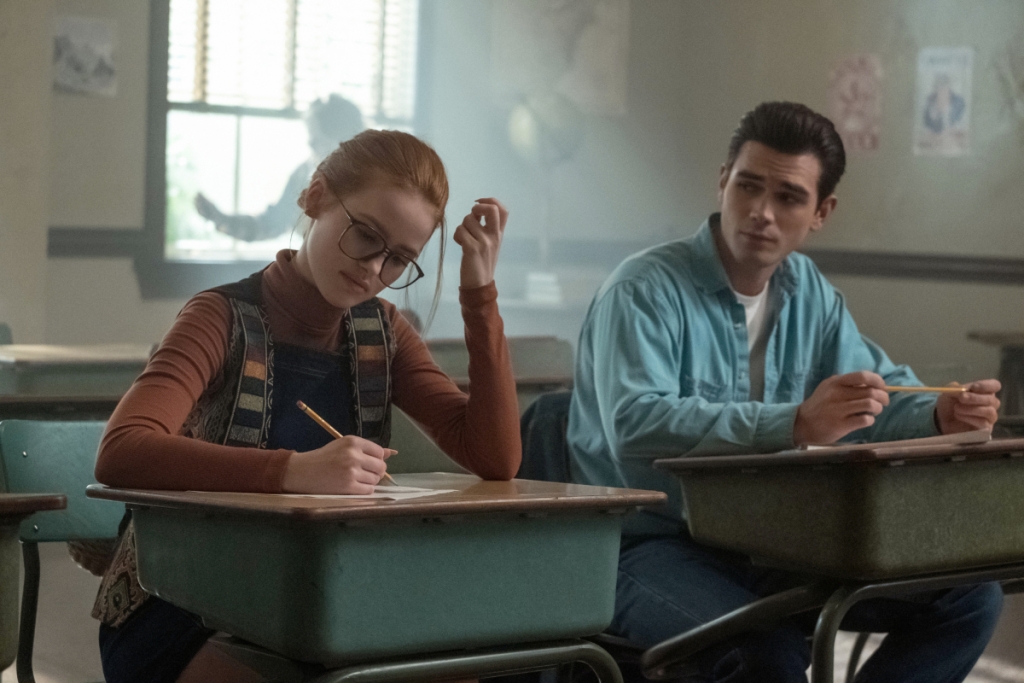 — Here on the Sweetwater Revue, we love a good Heathers reference.

— Tom and Sierra were very sweet, and it makes me even happier that they found each other again as adults.

— Teen Fred was just as sweet as the adult version, bless his heart.

— So are all of the teenagers murderers now? Is this legally murder?

— What is with this show and incest??? Seriously! This is like the fifth time that near incest has been hauled into this show! Roberto, why?

— Where was Mary in this? If you’re gonna do a Breakfast Club based episode, going so far as to cast Anthony Michael Hall (Brian) to be the Principal, at least bring in Molly Ringwald’s character! If you can bring in a guy to play young Hiram, you can bring in a girl to play Mary.

— Riverdale Parents Ranking: None this week.

“B, you don’t make Fibes 20 Under 20 by prancing around the woods in a deer carcass.” – Veronica.