We continue our recap of the entire Riverdale series with episodes 8 and 9 of the first season, “The Outsiders” and “La Grande Illusion”.

Join us for our weekly recap of the entire Riverdale series, starting with the first episode of Season 1. This will be a bi-weekly column (every Tuesday and Thursday), with two episodes reviewed each time, until we get caught up with the latest season. Catch up on everything you might have missed using the links below, or just dive right into to episodes 8 and 9 of the first season of Riverdale.

Season 1
Episode 1: The River’s Edge
Episodes 2 and 3: Touch of Evil and Body Double
Episodes 4 and 5: The Last Picture Show and Heart of Darkness
Episodes 6 and 7: Faster Pussycats! Kill! Kill! and In a Lonely Place 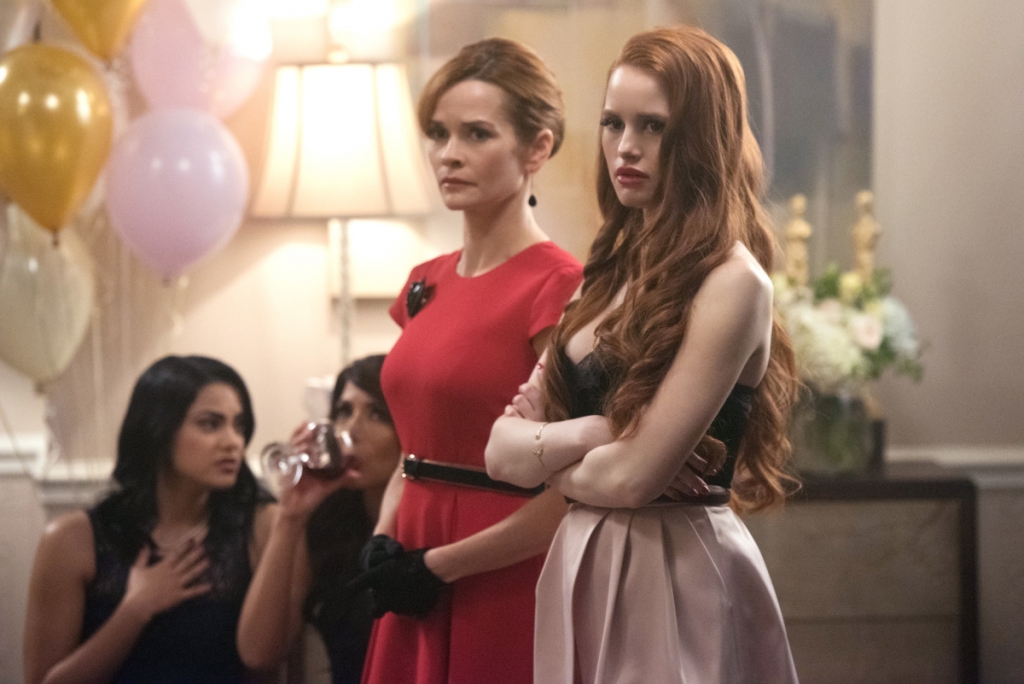 The Lodges host a baby shower for Polly at Pembrooke, where the Blossoms and the Coopers feud and Polly has to choose which family she wants to stay with. After much debate, she chooses to stay with the Lodges. Alice and Betty mourn this after Alice kicks Hal out of the family for trying to force Polly to have an abortion.

The Blossoms steal Fred’s crew out from under him for construction work, leading him to see them as enemies. Archie and pals try to help —  only for Moose to be attacked and for some of the construction equipment to be destroyed. Theories bounce over whether it was the Serpents or the Blossom family — only for Hermione to discover that it was Hiram sending down thugs from Montreal. He knows about her and Fred’s relationship. 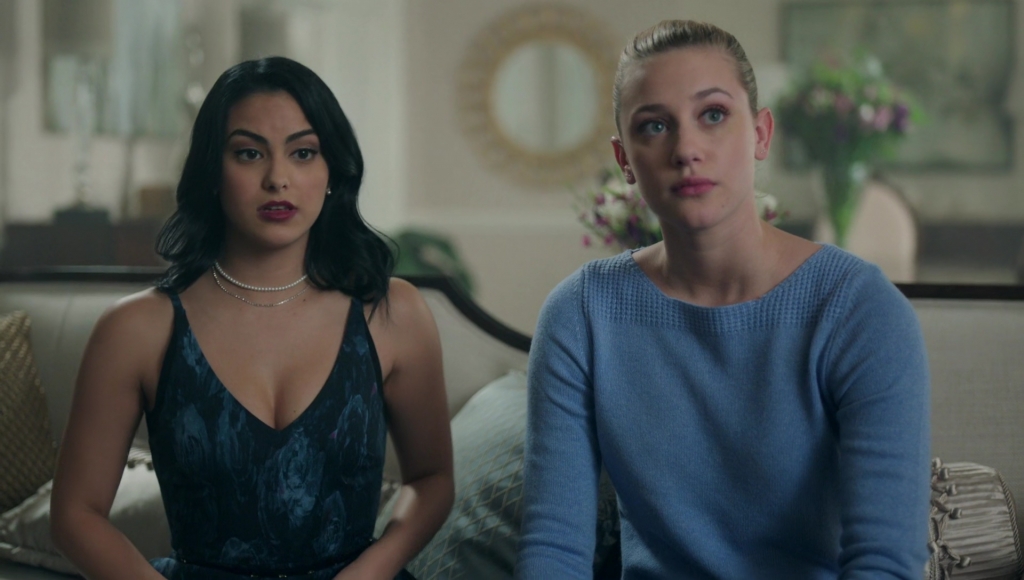 — I enjoyed the Lesley Gore cover during the Cooper family portrait. I kinda wish it had continued into the exploration into Polly and Jason’s romance, because that would have been leagues better than Jughead’s narration — exposition giving as it was.

— It’s good to see that Polly’s been doing well enough to talk to the police while staying at Pembrooke. It’s also nice to see that Jughead is settling in at the Andrews home.

— Veronica’s plan is good on paper, really bad on execution. So is Polly’s plan to get Penelope Blossom to like her by inviting her to the baby shower. I don’t see her staying at Thornhill ending well. The Blossom parents are not good people. 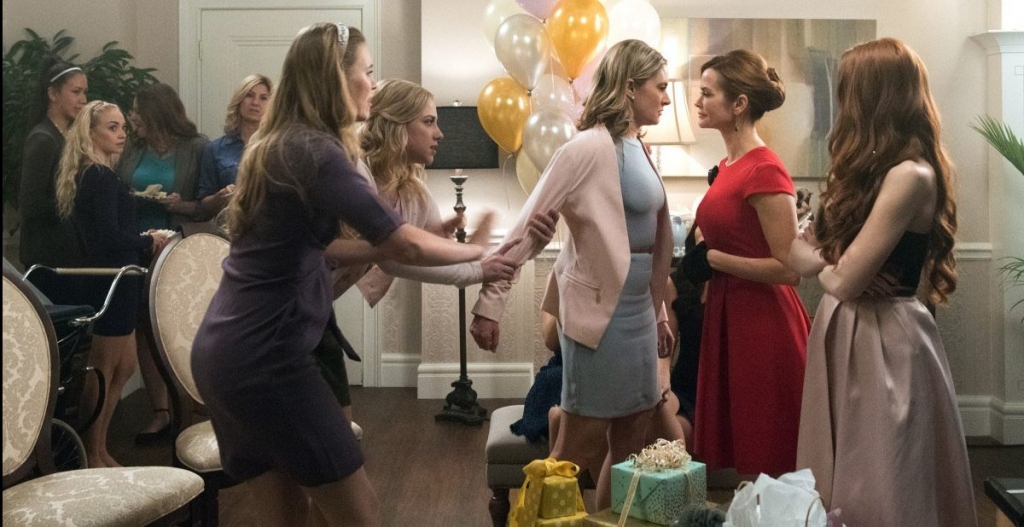 — I feel like Nana Rose might be right about the twins. As iffy as the whole ‘gypsy blood’ thing is, twins do run in the Blossom family tree, and it would make sense if Polly ended up having twins. I just hope she’s in a good place when she has the baby, whether there’s multiples or not.

— It’s good to see Betty standing up to her mother again — and Alice making a genuine effort to fix things with Polly. That includes kicking Hal out of the house when she discovers that he tried to make Polly have an abortion.

— Fred’s clearly doing his best, but the man needs more financial help than just Hermione as a bookkeeper.

— Good petty revenge for Hiram for trying to destroy the equipment, and better work on Hermione’s part for bringing in people from other towns to help fix things. 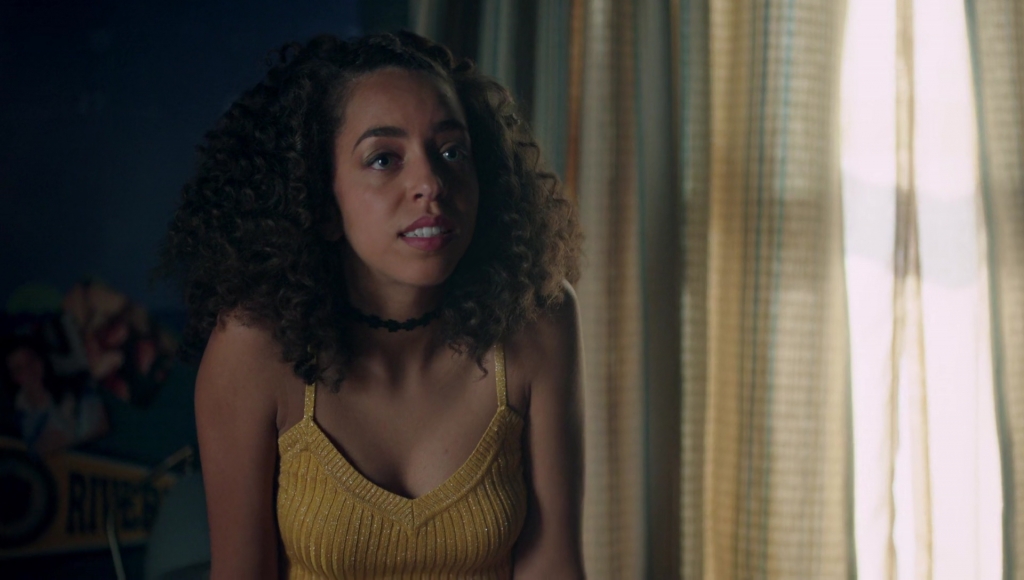 — Bursting into the baby shower was a big faux pas on Archie’s part. I can understand why the information about FP was important, but could he at least have taken Veronica and Betty aside instead of airing out the dirty laundry to a ton of people, including Betty’s mother? Another notch on the ‘Archie’s an idiot’ tally.

— Good for him on starting to date Valerie though. They’re a sweet couple!

— The whole thread with Joaquin and Kevin makes me genuinely really sad. I wish Kevin could find someone nice…someone who isn’t closeted or using him to get information.

— When are we going to actually physically see Hiram Lodge? It feels like they’re dangling him over our heads the same way they dangled Polly over our heads.

— Riverdale Parents Ranking: Fred, Hermione, Alice, The Blossoms, Hal. The Blossoms and Hal are neck and neck for worst parents.

“War is hell.” “No, Archie, hell is other people.” – Archie and Jughead respectively.

“Betty, c’mon. An impossible situation is being invited to the Vanity Fair Oscar party and Elton John’s Oscar party on the same night. Which happened to me one year, I know.” – Veronica. (Also she says it like ‘Vanity Flair’, which I’m surprised no one caught.)