We continue our recap of the Riverdale series with episodes 3 and 4 of the second season, “The Watcher in the Woods” and “The Town That Dreaded Sundown”.

Season 2 Recaps:
Episodes 1 and 2: A Kiss Before Dying and Nighthawks

Episode 3: “The Watcher in the Woods” Synopsis 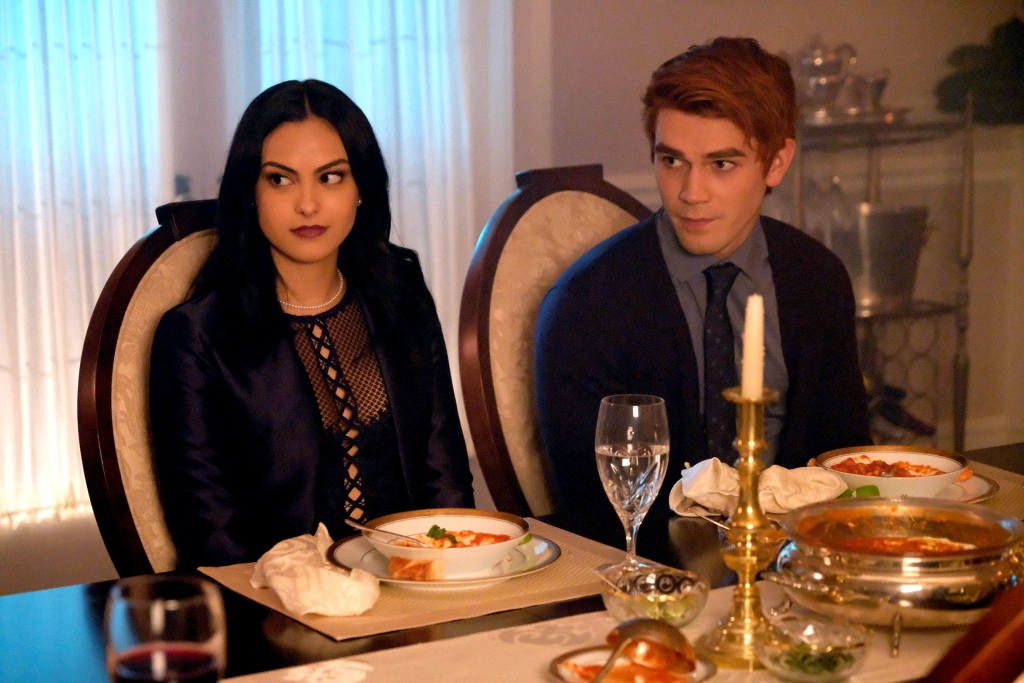 Kevin goes into Fox Forest to go cruising, trying to get over Joaquin, only to find Midge covered in blood and her boyfriend Moose full of bullet holes. He makes it through, but the whole high school is left shaken in the wake of the attack — especially Archie. Now wielding a gun, Archie’s fed up with dealing with the Black Hood and chooses to form a vigilante group with a few football players and Dilton Doiley. They call themselves the Red Circle and, after being questioned by Sheriff Keller and approved by Principal Weatherbee, proceed to make a video threatening the Black Hood.

Jughead starts school at the destitute Southside High, fueled by gang violence and drug use, and decides against joining the Serpents — despite making friends with Toni Topaz, a photographer for the school newspaper who is also a Serpent. He also tries to help Betty as she tries to decipher who the Black Hood is, while her mother and father put evidence in the local paper and Polly decides to leave to the farm she and Jason had planned to leave to together.

Veronica attempts to make sure Archie makes a good impression on her family, inviting him over to have dinner with them, only for Hiram to take Archie aside to encourage his work in the Red Circle. 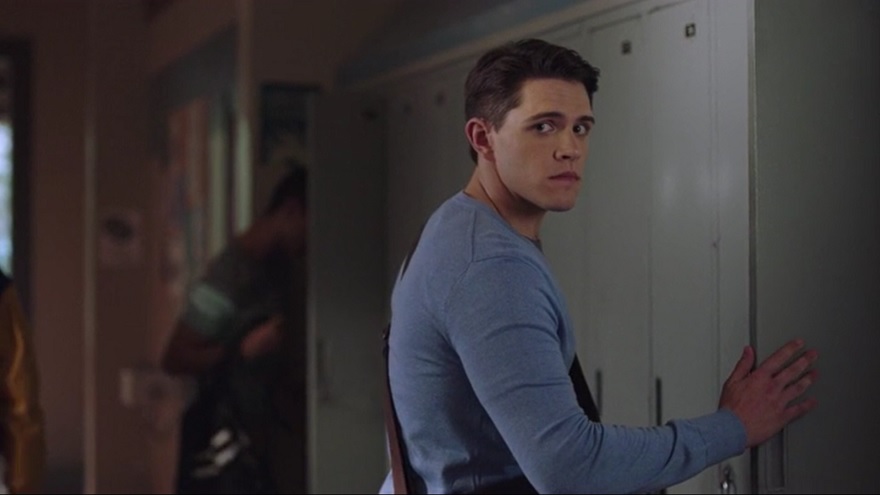 — Good to see Kevin getting over Joaquin by getting under someone else, bad to see him getting caught up in everything with the Black Hood! It was also nice to see him bonding with his dad, and I loved the ‘The Reason You Suck’ speech he gave Betty.

— It was also nice to see that Moose and Midge both survived their attack. I’m going to give it a few more episodes before the Black Hood kills again. For now his tactics seem to mostly be intimidation. He has to be someone in town though, since he was easily able to send off the glasses and wallet to the Coopers.  I still can’t pinpoint who it might be though.

— Almost everything about the Red Circle is stupid and a bad idea. First of all, maybe Archie shouldn’t be courting trouble with the guy who shot his dad. Second all, Hiram’s a known criminal. And while I can kind of get why Archie would want to be all buddy buddy with him since he’s Veronica’s dad, it’s still an awful idea.

— I’ll give Archie this at least: his hiding spot for his gun is better than Betty’s was for Ms. Grundy’s gun. 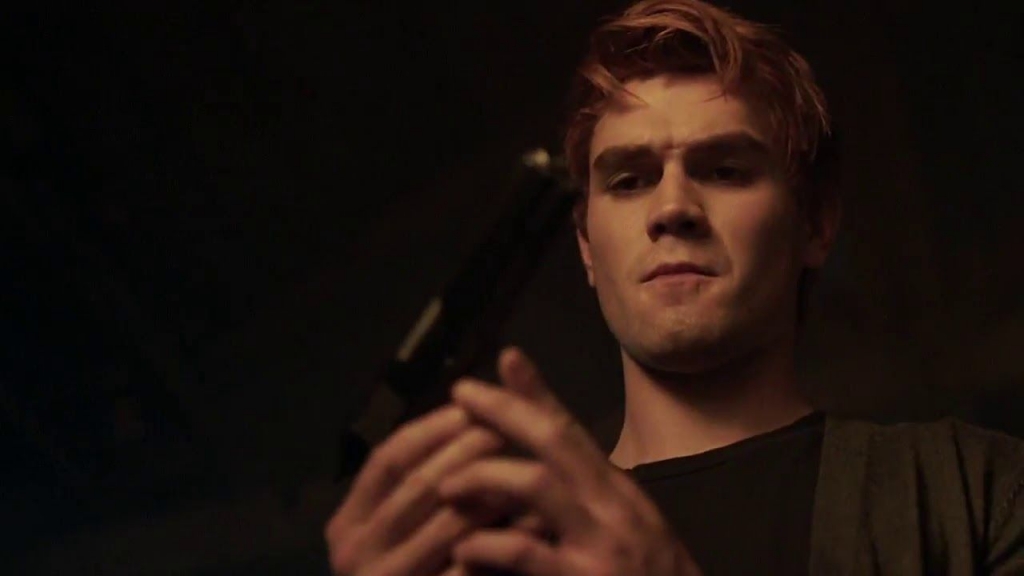 — Sheriff Keller is a very good dad in this episode, trying to reconnect with and protect Kevin, but not a very good cop since he doesn’t try harder to stop the Red Circle. Seriously, they’re a vigilante group, and I’m pretty sure that’s still illegal even in times like this.

— So since Polly’s gone to the Farm, does that mean that we’re not going to see the babies when they’re born? Either way, I hope she gets something out of this. If nothing else, the Black Hood probably won’t follow her out of town.

— I like Toni and Sweet Pea. It’ll be nice to see Jughead making some friends outside of Riverdale High while he works at the school’s newspaper the Red and Black. Maybe it’ll make him more likable!

— I enjoyed the glimpses I saw into Southside High’s aesthetic and inner workings. I also enjoyed the fact that I finally figured out what Jingle Jangle is supposed to be: cocaine. Why did they call it Jingle Jangle instead of cocaine? Who knows, this show confuses me so much sometimes.

— I like the Ghoulies more than the Serpents already, if only on an aesthetic level.

“Guys, can we focus on what happens here? Midge and Moose are alive, Archie’s dad survived. The new season of ‘The Bachelorette’ starts tonight. You’re all coming over to watch.”

“There’s a shooter terrorizing the town. Do you really want us to watch a gross reality dating show?”  – Veronica and Jughead respectively. 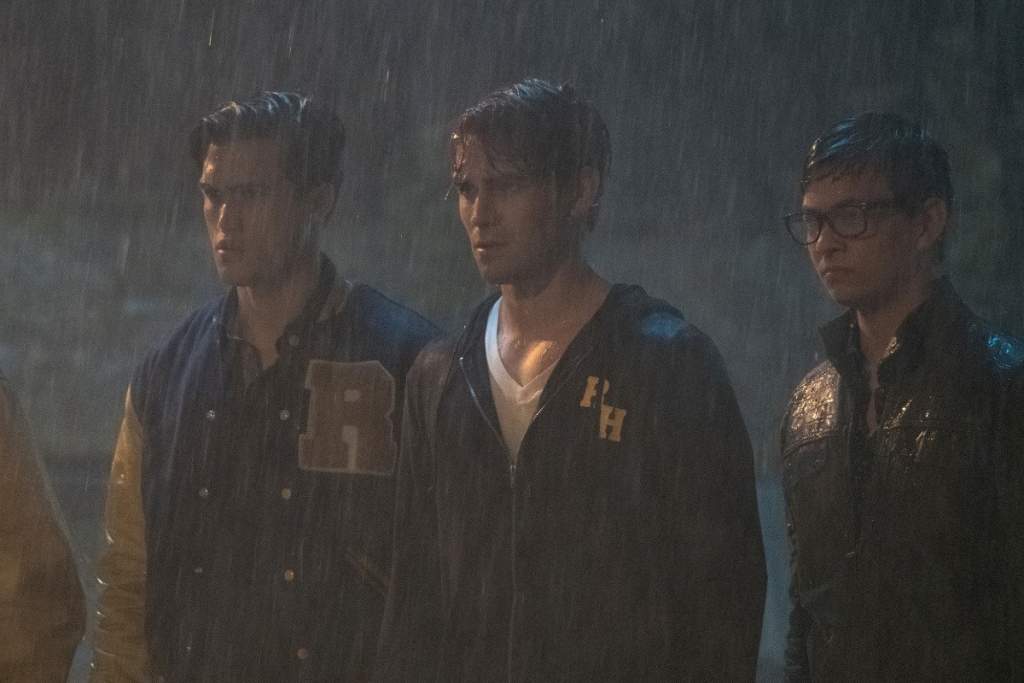 Archie continues to escalate his fight against the Black Hood and proceeds to, in order: go back into the woods for target practice, almost get broken up with by Veronica, get first removed from the football team and then banned from the school grounds entirely, use a fake license to get supplies to go ‘hunting’, tag a ton of red circles all over the Southside, threaten the Serpents with his gun, and get into a turf battle with them that results in one of his friends getting stabbed. He finally, after talking to Veronica, drops the gun into the Sweetwater River and decides to change his ways.

Betty receives a letter in cipher from the Black Hood and Jughead, still getting closer to Toni and working at the Red and Black, helps her decipher it. The key turns out to be one from a Nancy Drew Secret Code book,  and the letter reveals that the killer was inspired by Betty’s speech at the Jubilee to ‘cleanse the town of sinners’. Once the code is broken, Betty finally hands over the letter to the police and to her parents — Alice having wept crocodile tears over her and railed against the Southside and Fred Andrews at a town meeting. 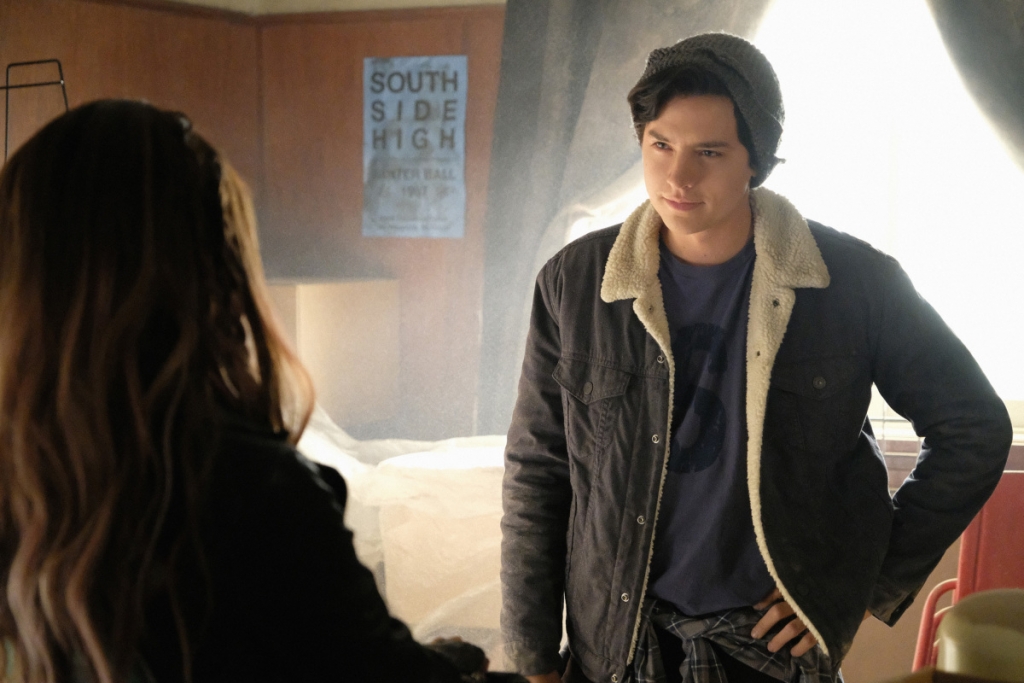 — Jughead, we all know you didn’t do it but taking out a bunch of books on serial killers while there’s a serial attacker o