We continue our recap of the entire Riverdale series with episodes 13 and 14 of the third season, “Requiem for a Welterweight” and “Fire Walk With Me”.

Season 3 Recaps:
Episodes 1 and 2: Labor Day and Fortune and Men’s Eyes
Episodes 3 and 4: As Above, So Below and The Midnight Club
Episodes 5 and 6: The Great Escape and Manhunter
Episodes 7 and 8: The Man in Black and Outbreak
Episodes 9 and 10: No Exit and The Stranger
Episodes 11 and 12: The Red Dahlia and Bizarrodale

Episode 13: “Requiem for a Welterweight” Synopsis 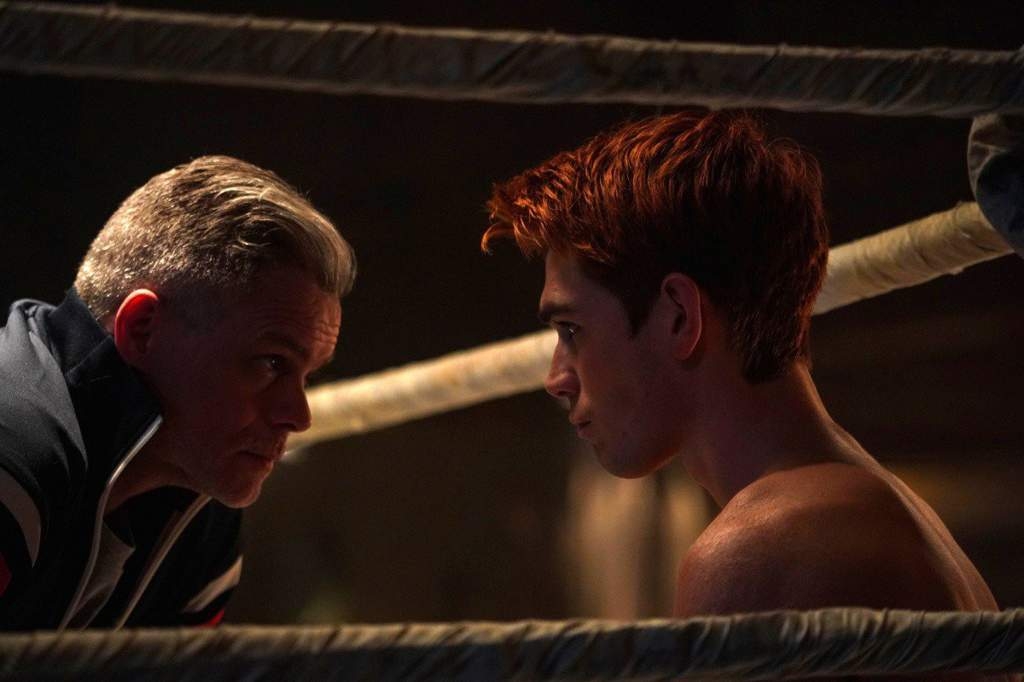 Archie, now dating Josie, is training with Tom Keller to become a boxer. He undertakes a match with boxer Randy Ronson with the promise that he’ll lose. He ends up going through with it, despite the warnings of Tom and Josie, because Elio threatens him. After talking with Tom, he tells Elio that he won’t throw the fight. Elio tells Randy to kill Archie in the ring. Ultimately, Archie still loses but he doesn’t throw the fight. It’s a fair loss and he gets to live another day.

Now that Hiram’s out of the hospital, he wants to know what happened to the drugs that were destroyed. He thinks the Jones family has messed with his supply and that they need to get revenge. Veronica agrees to be Gladys’s spy in order to pay off her debts to her, and tries to encourage her father to focus his attentions towards the prison and not the drugs. He decides, instead, to try and get the Ghoulies on his side now that Penny’s gone and they’re leaderless. However, after meeting with Gladys and being unable to get her on his side and pointing his anger towards Hermione, Veronica reveals the truth and takes on the debt for him. 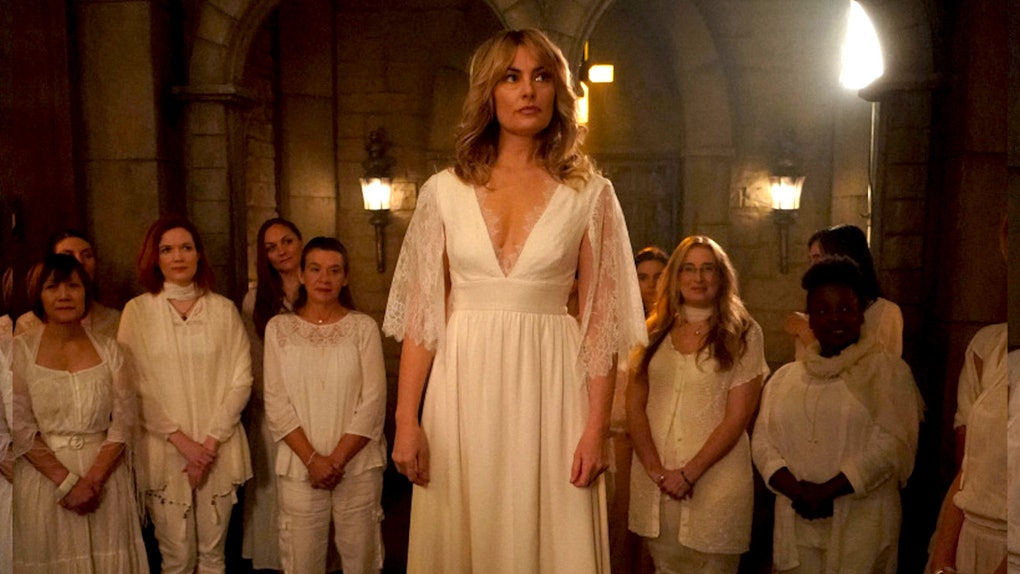 With many Serpents having defected to the Pretty Poisons with Toni and Cheryl, Jughead begins working towards rebuilding their numbers. He tries to talk Toni into coming back, saying that the Pretty Poisons are a vanity project for Cheryl, but that only pushes her away further. When the Pretty Poisons attack Fangs and Sweet Pea, Toni’s former friends, Toni scolds Cheryl for sending them out against her will and affirms her status as leader, while Jughead agrees that they need to get the Ghoulies on their side. Their new leader, Kurtz, refuses to work with Jughead for immunity against the law because the Gargoyle King protects him. However, he bends to Gladys’ will and agrees to work with her.

Betty learns that her mother wants to be baptized with the Farm and is warned by the sister of a Farmie that the whole thing can be fatal. After failing to get help, Kevin wanting to join the Farm, she sneaks in to the baptism and finds her mother drowning. She saves her life, only for her mother to refuse to leave the Farm even after almost dying — she even wants to sell the Cooper home and come to live with the Farm. 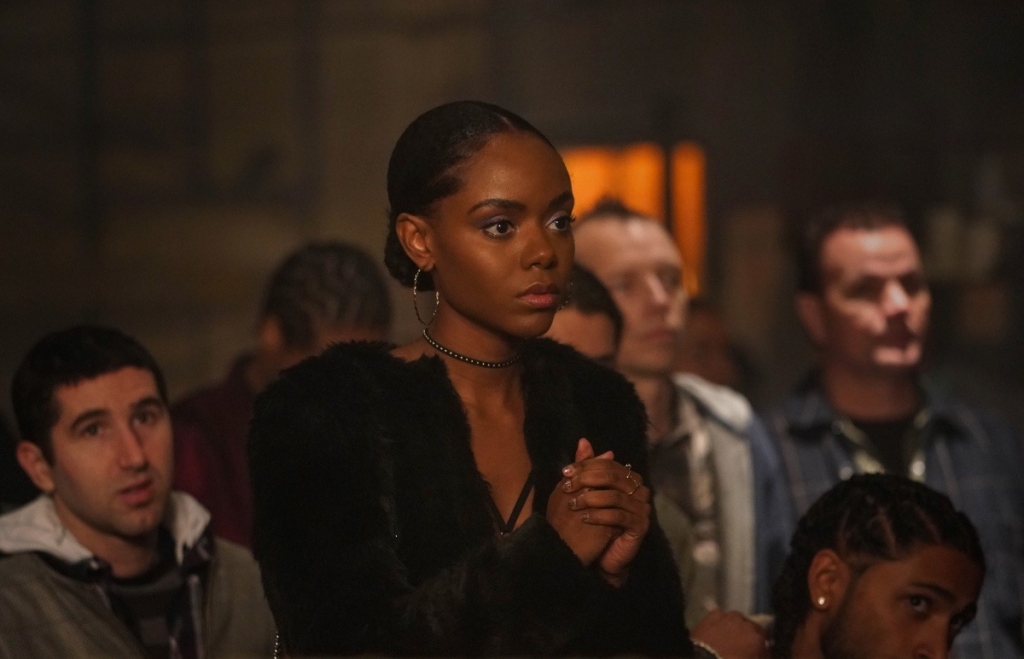 — I love getting to see Tom act as a father figure. He’s a good father figure, although I do wonder where Fred is in this episode.

— Josie and Archie are a cute little couple!

— This whole episode was extremely meh for me. I don’t really have a lot to say about it.

— Cheryl and Toni are going to break up soon and it’ll be the best thing for both of them because Cheryl still has a sea of growing up to do before she can be a functional adult – in a relationship or otherwise. 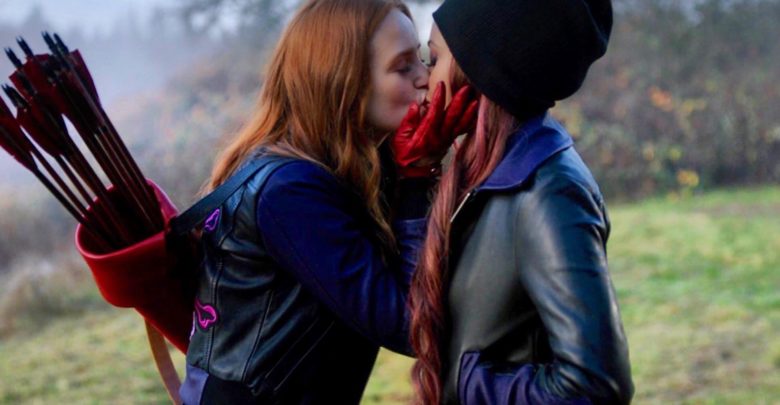 — So is Edgar Evernever just never going to show up, because he’s taking his sweet time with showing up in this hellfire show.

— Martha’s absolutely dead in a ditch somewhere. RIP Martha, you tried and you failed to stop this shit from going down.

— The fact that we haven’t seen the babies in a while makes me worried for their safety.

— Can we just have Gladys as the big bad? She’s so much more fun than Hiram!

“I signed one scarier when I joined 23-Hour Fitness.” – Alice, about the release forms for her baptism.

Episode 14: “Fire Walk With Me” Synopsis 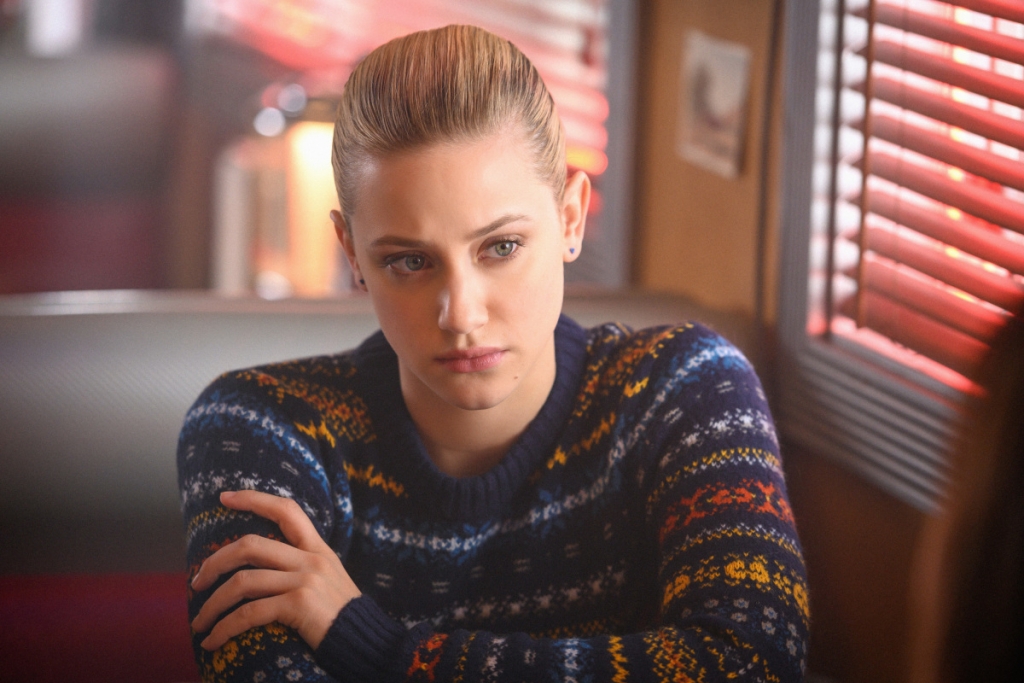 As Alice tries to sell the Cooper home, Betty tries to sabotage the sales by telling people the gory history of the home. This continually fails, and after telling Archie to go to a social worker who’d helped her before and failing to get Kevin out of the Farm’s grasp, she learns that Kevin’s been sneaking out to be with the Farmies. She fails to stop Kevin’s induction into the Serpents, and is then blackmailed by Kevin and Evelyn both because her mother told all of the family’s secrets to the Farm.  The house is sold to an anonymous buyer, but Betty lights the living room ablaze before leaving Alice to find it burning.

After a brawl breaks out between Farmies, Serpents, and the Pretty Poisons, Weatherbee tells Jughead that he’s a strike away from being kicked out after a series of gang-related crimes occur on campus (including the stealing of lab equipment for drug making). While Toni reprimands Cheryl for her part in the fight, Betty and Jughead catch up and learn about Archie’s new protege.  Kurtz, the one who started the brawl, antagonizes Jughead and Fangs and then tells Jughead that the Serpents need them more than the Gargoyles need the Serpents and tells him to come up with a better deal or they’re gone. FP tells Jughead that he needs to make the Serpents symbol something to wear with pride and to out think his enemies. Finally, after helping to find Ricky, Jughead deputizes all of the Serpents to act as a force for good in exchange for payment and college credit. All the Serpents agree to this except for Kurtz, who leaves. 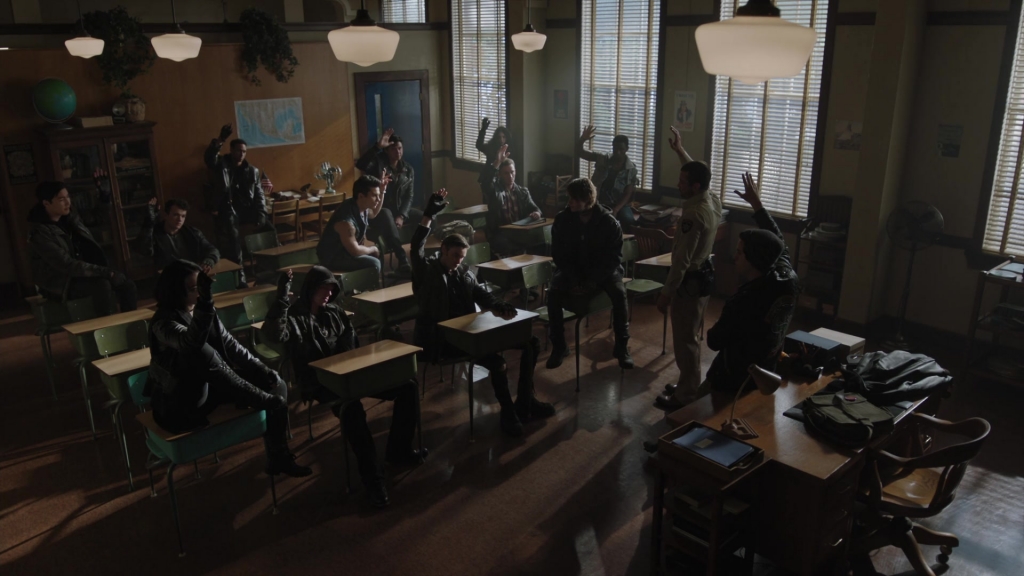 After deciding to put more into his boxing, Josie and Archie find a boy hidden away in a closet at the gym he now works at. Ricky, the child, was once in a shelter with older men who played G&G and was branded with the same sacrifice symbol Archie was before running away. The boy sleeps over in the garage of the Andrews home after Archie takes him under his wing, but runs away after leaving behind a Gargoyle King based drawing. Betty and Archie meet with the social worker, Ms Weiss, who affirms that G&G is all over the country nowadays.  Archie accuses Kurtz, during a serpent meeting, of taking the boy and he refuses but also refuses to help and find him. They find Ricky at the abandoned house where Jughead met Kurtz and the boy says that he and Archie are both marked for death  and that there’s no escape. After being taught how to box and offered a home with the Andrews family, Ricky attacks Archie to try and save himself and runs away again.

Veronica decides to make La Bonne Nuit into a casino full-time for more money and uses careful compartments to hide all of the games. She cuts a deal with her father for his monetary assistance in wiping away a small chunk of her debt to him, making the same deal with Gladys after she reveals that she wants to sing again. After Gladys and Hiram steal her spotlight, she hires the Pretty Poisons to secure the place and bar the two from entering until they agree to play by Veronica’s rules. 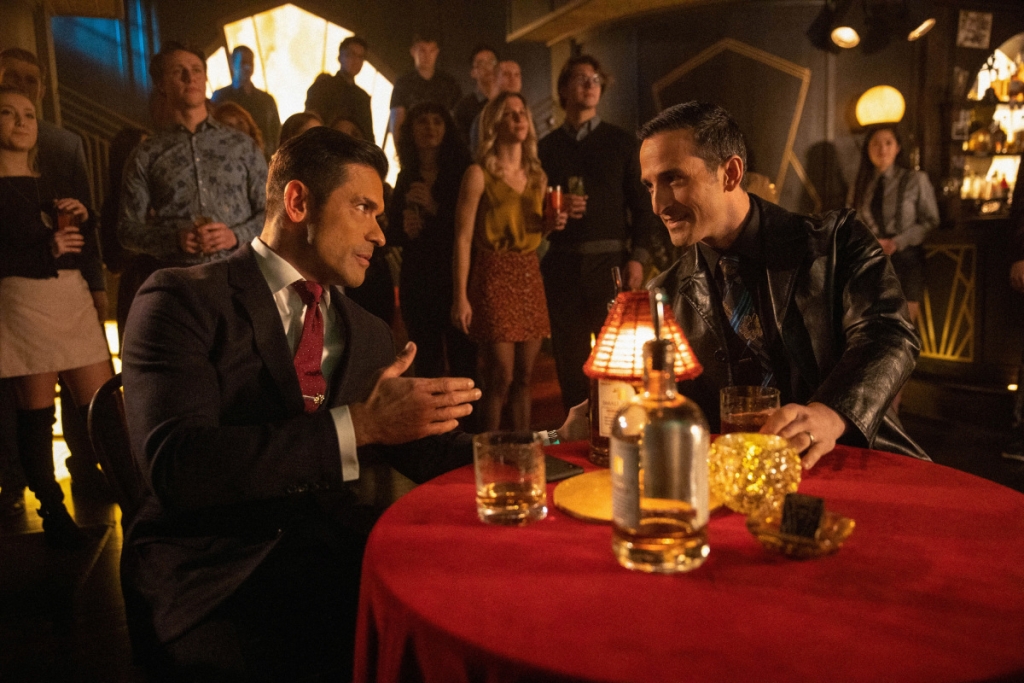 — Up until the whole ‘burning down the house’ thing, I thought Betty was doing pretty good! After all, you’re supposed to tell potential buyers when something like a murder happens or a serial killer used to live in the house.

— Good job making the title make sense, Riverdale. Walking on coals is a very common tradition in cults like this! It shows loyalty through pain.

— How have Tom and Sierra not noticed that Kevin keeps sneaking out to go play palsies with the Farmies?

— Gina Gershon is a good singer.

— I’m going to miss Fred when the inevitable happens. It’s a shame that it’ll need to end that way, but death isn’t fair. 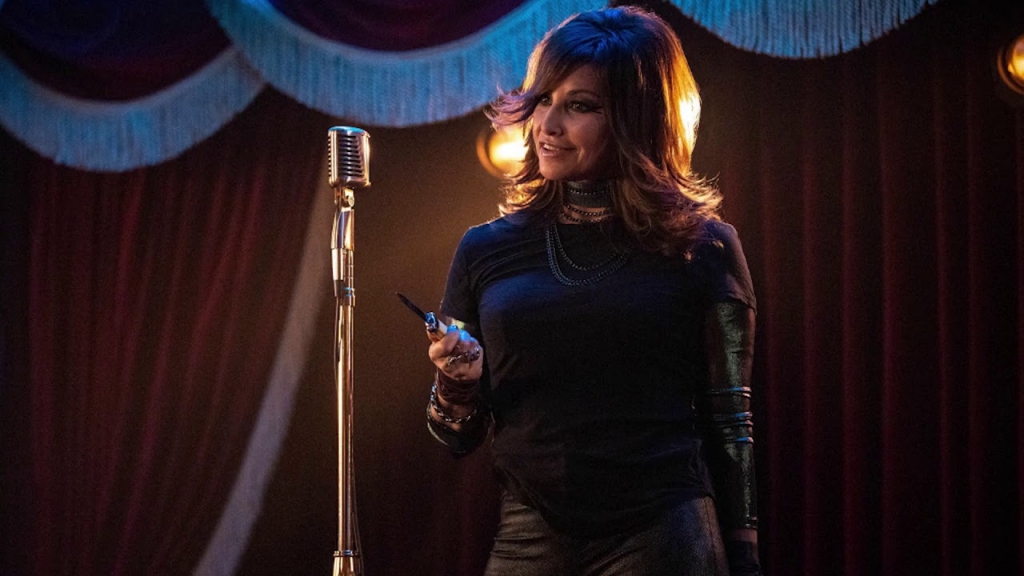 — Honestly, I expected the Serpents to be deputized. If FP’s the Sheriff, we might as well make a bunch of teenagers cops? Why not, Riverdale is a lawless hellscape from which there is no respite for anyone!

— Archie almost died in the woods this season, he doesn’t deserve any of this from a tiny child. Also, I feel like Ricky’s going to come back. He’ll either be a tiny version of Archie or he’ll be dead at the end of the season because we’ve already had so many dead children going on this season.

— I don’t really care that much about Veronica and her debt, honestly.

— Next time, my worlds collide as Riverdale takes on Heathers: The Musical! If I said I was excited for it, I’d be a liar!

“You dare lecture me, your Student Council President on rules and procedures? If this were the 18th century, I’d have you beheaded.” – Cheryl