We continue our recap of the Riverdale series with episodes 11 and 12 of the second season, “The Wrestler” and “The Wicked and the Divine”.

Season 2 Recaps:
Episodes 1 and 2: A Kiss Before Dying and Nighthawks
Episodes 3 and 4: The Watcher in the Woods and The Town That Dreaded Sundown
Episodes 5 and 6: When a Stranger Calls and Death Proof
Episodes 7 and 8: Tales From the Darkside and House of the Devil
Episodes 9 and 10: Silent Night, Deadly Night and The Blackboard Jungle 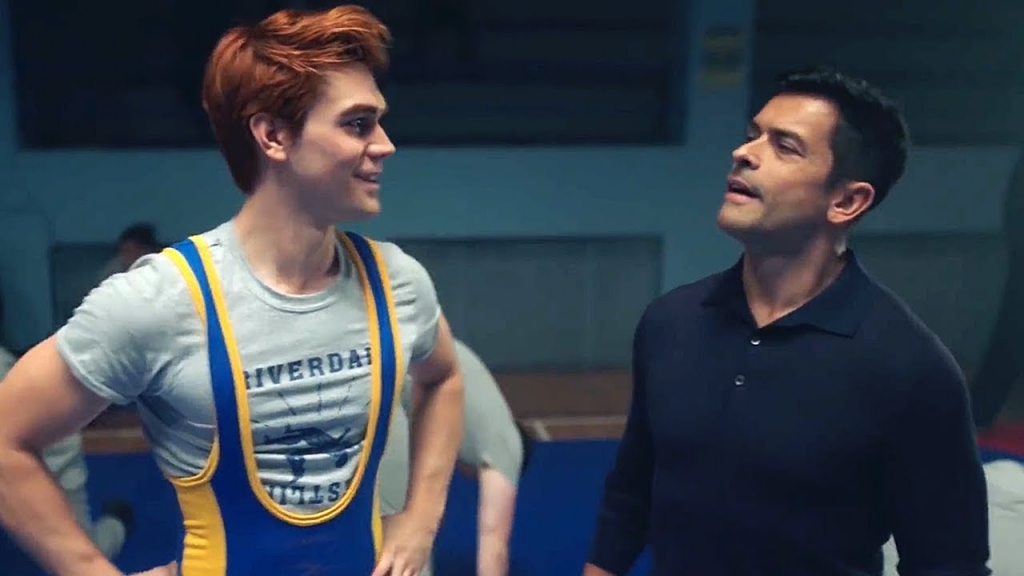 Archie, in an attempt to deal with his own issues and win over Veronica’s father, attempts to join the wrestling team. After a heated argument with him in his office and a triumph over Chuck Clayton, Hiram and Archie make amends and Archie  agrees to ‘intern’ under Hiram.

Betty bonds with her older brother, trying to keep him from leaving like Polly did and giving him an old laptop when his old ‘landlord’ throws out all of this things and destroys his computer. She learns from Kevin that Chic is a webcam model, and sees it as a way to release some of the pent-up darkness inside of her. She asks him to teach her and he agrees.

As Pickens’ Day, a historical holiday in town, approaches, Jughead discovers that the whole thing is built on a whitewashed lie. The truth is that the hero the town loves so much was a murderer, killing almost the entire Uktena tribe — the remains of the tribe becoming the Southside Serpents — in a twelve-minute long slaughterfest. After misstepping with his article on the subject, he — and, surprisingly, Cheryl — join in on a Serpent-based protest against the holiday in the town’s square. The statue of Pickens is later vandalized, with his head being removed. 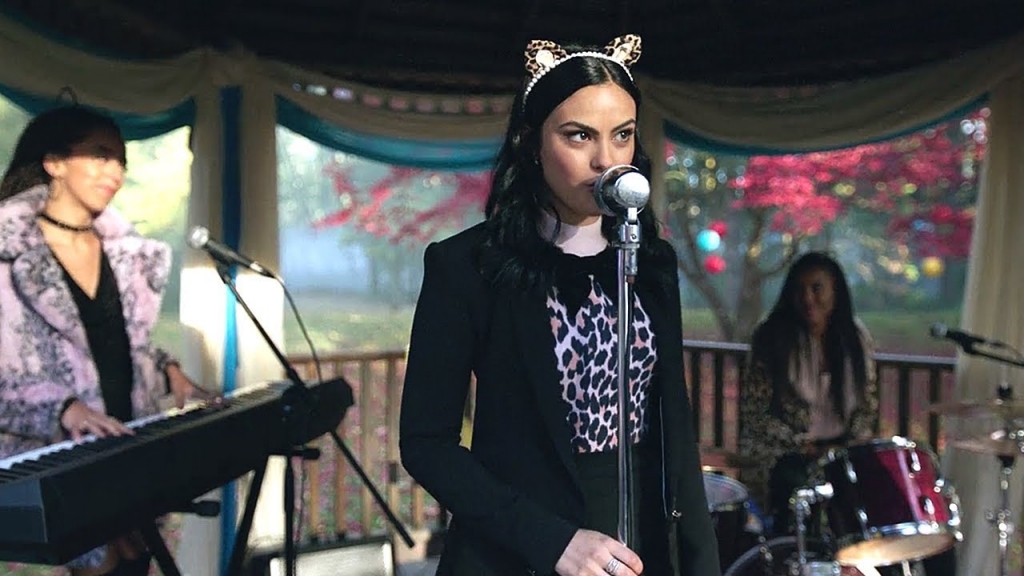 — This episode has some spectacular directorial work courtesy of Gregg Araki (Kaboom, The Doom Generation). His expertise lends the episode a touch more punch, backed up by some surprisingly strong writing.

— Veronica and the Pussycats were good enough, I suppose, but I still wish Josie and the Pussycats were together. Although that dream’s about as dead as Jason Blossom is considering that, for all intents and purposes, this was Valerie and Melody’s last episode to date. To the best of my knowledge, their characters and actresses (Hayley Law and Asha Bromfield respectively) have no connection to the show post-this episode (although if you’re interested in seeing more of the former, Law does appear in the sci-fi Netflix show Altered Carbon).

— There’s so many better songs they could have used for the Chuck and Archie wrestling scene. The last thing I think about when it comes to wrestling is Jaden Smith.

— Seeing Archie and Hiram wrestle made me genuinely kind of uncomfortable. — Learning about the origins of Serpent culture was very interesting, and I think that the show (surprisingly, considering literally everything else with this show) handled the subject with a careful and delicate hand. The whole thing with the Pickens statue reminded me of the current battle to remove Confederate statues from around the country —although the removal of the head and simulated blood paint at the end just made it seem a little bit silly.

— I hope that Cheryl joining the Serpents in the protest comes back. It was lovely to watch her rebelling against her mother in a productive way (instead of burning down a house), and I want more interactions between her and the Serpents.

— Why am I not surprised that they’re dragging Kevin into the whole thing with Chic being a sex worker. A lot of Kevin’s plotlines during this series end up involving him and sex, and I wish they didn’t because there’s so much more of the ‘small town gay’ experience to be explored here.

— Honestly, I don’t blame Sierra for being iffy about Veronica from a motherly standpoint. She still shouldn’t be, because she’s been involved in the dealings of the Lodges since Hiram bought the Twilight last season, but I can kind of get it. 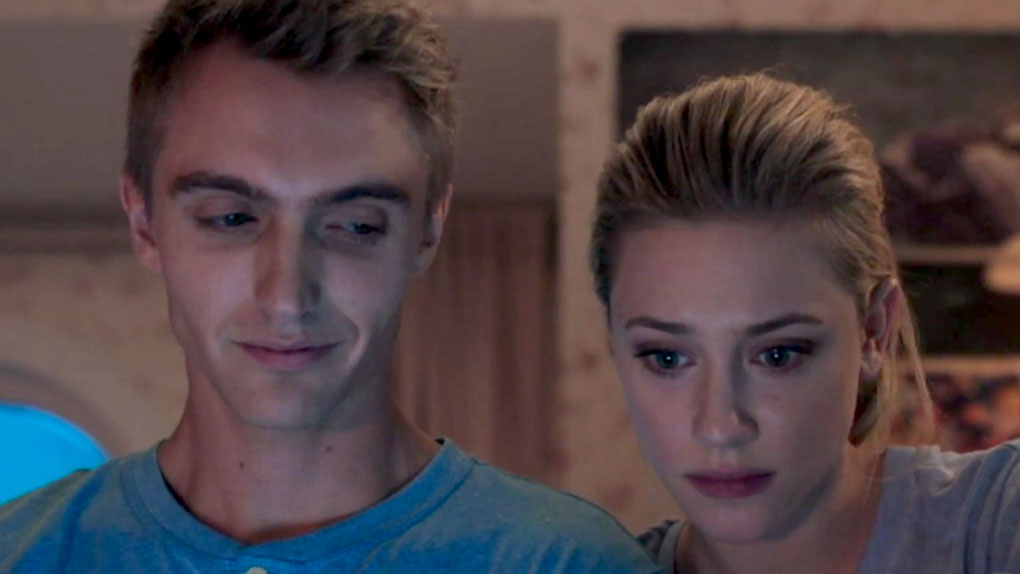 — At first, I thought it was nice that Betty’s bonding with her older brother. But most sibling bonding sessions do not include the older one teaching the younger, not legal one to cam.

— So did this episode confirm that Hermione and Fred slept together, or does Hiram just think they did because they kissed a couple times?

— Is it incest if Penelope and Hal have sex? Did Penelope marry into the Blossom name or did she make Clifford change his last name? Important questions.

Episode 12: “The Wicked and the Divine” Synopsis 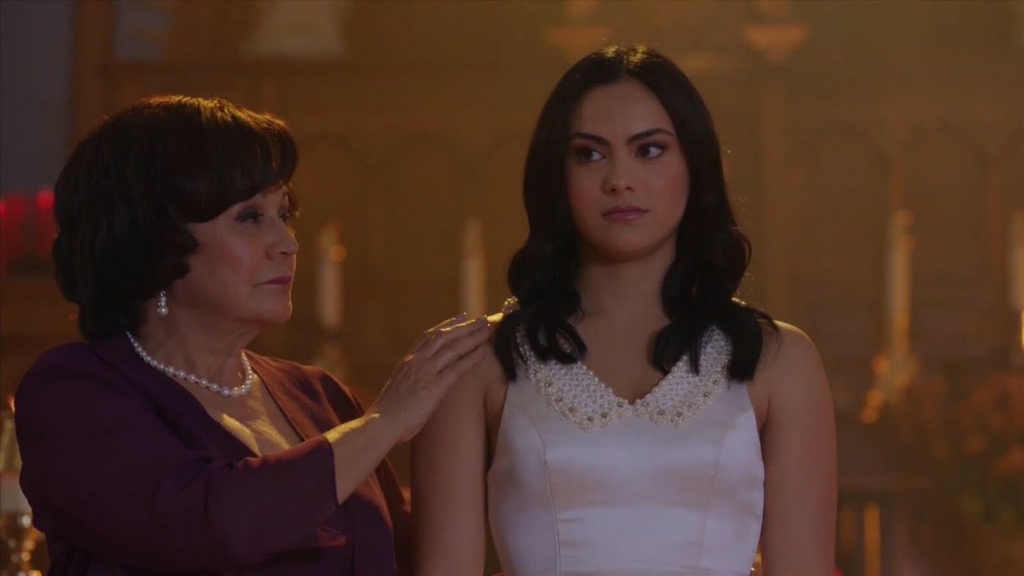 It’s time for Veronica’s confirmation ceremony (delayed by a few years because her parents wanted the same Monsignor who baptized her to do it) and she invites everyone to it. In spite of her struggles with her family’s sin and her own, she goes through with the ceremony and affirms her relationship with Archie in the process.