We continue our recap of the Riverdale series with the final two episodes of the second season, “Judgment Night” and “Brave New World”.

Season 2 Recaps:
Episodes 1 and 2: A Kiss Before Dying and Nighthawks
Episodes 3 and 4: The Watcher in the Woods and The Town That Dreaded Sundown
Episodes 5 and 6: When a Stranger Calls and Death Proof
Episodes 7 and 8: Tales From the Darkside and House of the Devil
Episodes 9 and 10: Silent Night, Deadly Night and The Blackboard Jungle
Episodes 11 and 12: The Wrestler and The Wicked and the Divine
Episodes 13 and 14: The Tell-Tale Heart and The Hills Have Eyes
Episodes 15 and 16: There Will Be Blood and Primary Colors
Episodes 17 and 18: The Noose Tightens and A Night to Remember
Episodes 19 and 20: Prisoners and Shadow of a Doubt 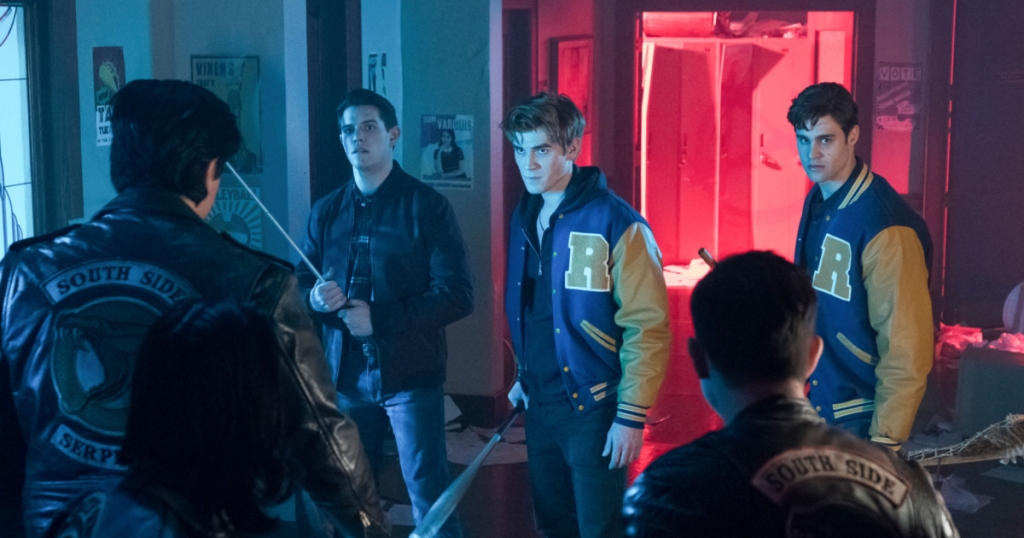 After missing the Black Hood at Town Hall (since he was off trying to kill Cheryl, who shoots him in the arm with an arrow), Betty tries to find her father at the hospital where he was checked in after being attacked and finds the corpse of Dr. Masters (who’d previously treated Fangs) and then is called back to her home by the Black Hood. Hal, Alice, and Betty watch home movies of Hal being punished by his family and learn through them that Betty’s grandfather was the Riverdale Reaper who slaughtered the Conway family. Hal then tells them that he’s the Black Hood, that the Cooper grandfather murdered the Blossom instead of the other way around (the murder that tore the families apart)  and that he was influenced by Betty’s speech. He then attempts to kill Alice, only to be knocked out by Betty.

Veronica finds both a million dollar bounty on the Black Hood’s head and an ‘October Surprise’ of evidence of Hermione and Fred’s relationship meant to destroy Fred’s campaign, both created by Hiram. At the same time Small Fry Boucher, Papa Poutine’s son, comes to get answers about his father’s death. He and Andre, the bodyguard, are both killed. Veronica finally affirms that her father won’t break her and that she refuses to trust him ever again.

The Serpents, enraged by Fangs’s shooting (which was done by Mrs. Klump), attempt to ransack the high school (and are barely stopped by Archie, Reggie, and Kevin) and start a riot through the whole town. At the same time, Penny Peabody returns to town with the Ghoulies. After facing off against Sweet Pea over Jughead’s choices as gang leader and saving Toni from her Ghoulie-based prison, Jughead and the Serpents vote to go to war instead of fleeing Riverdale. The Ghoulies proceed to beat Jughead to a pulp (allowing Penny to slice off Jughead’s serpent tattoo) and leave him in the woods for dead where he’s found by his father. Hiram orchestrated all of this.

Archie tries to help fix everything, and his father is shot by a duplicate Black Hood (although nothing happens because he was wearing a bulletproof vest). 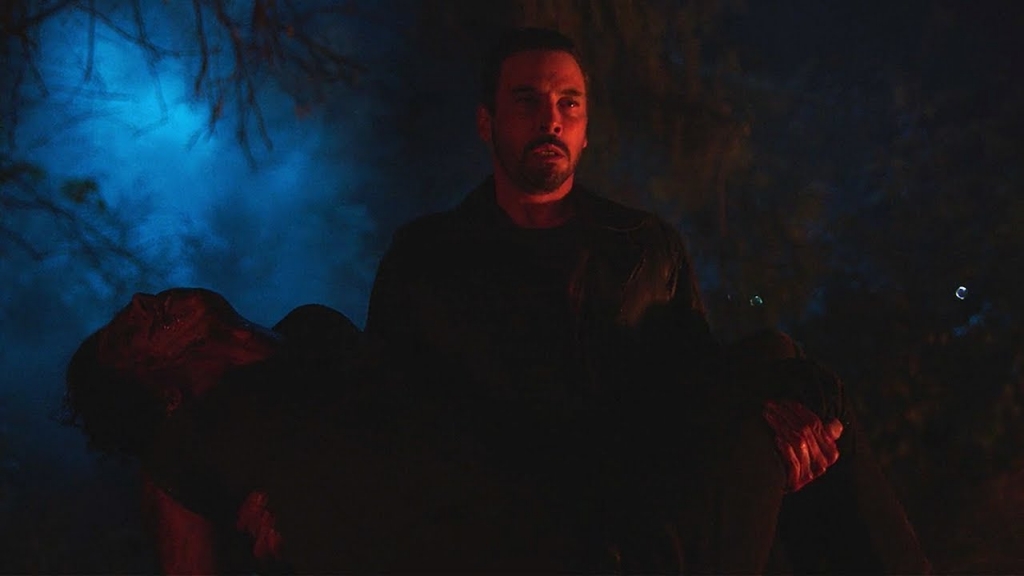 — So, first off: I called it on Hal being the Black Hood, I’ve called it this entire time. Didn’t call it on Betty’s entire family tree just being drenched in blood though. Secondly, so much happened in this episode and I can’t remember all of it so please bear with me if I can’t remember every single little detail.

— I still love the Ghoulie aesthetic so much more than the Serpent aesthetic. They’re awful people morality wise but fashion wise I love it.

— I don’t care about Penny Peabody at all. She’s not even intimidating as a villain, honestly. What I do care about is all the dads (except Hiram, for obvious reasons) banding together to try and save the day.

— Sweet Pea shouldn’t be a Serpent anymore. Not because he’s a criminal, literally everyone in this show is at least partially a criminal. The boy flies completely off the handle at any second . Maybe it’s because he and almost everyone else in the Serpents are dumb teenagers who can’t handle their emotions.

— The deaths of Small Fry and Andre did nothing to add to the story. They just kind of happened because the writers wanted a dead body.

— I loved the lighting in the hallway fight. It was some very good ambiance in a scene that needed it badly.

— I expected that Reggie wasn’t the shooter but he still shouldn’t have brought the gun along. I’m pretty sure Riverdale is still in New York and New York doesn’t issue licenses to carry guns openly. Even if they did, it was a riot situation and having a gun with you at a riot is like bringing your lighter to a burning movie theater. That being said, I do hope there’s some justice for Fangs in all of this. 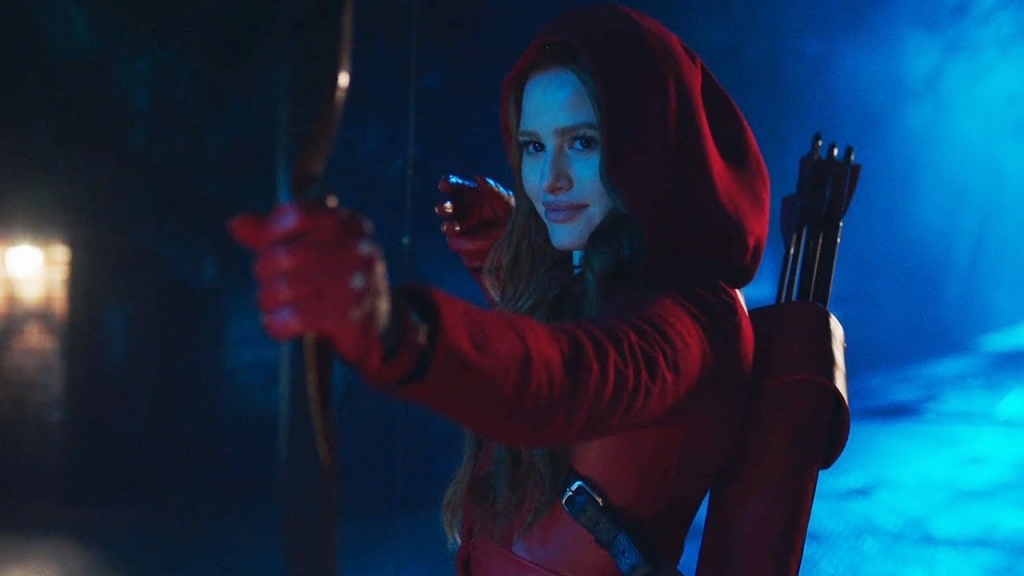 — Cheryl ‘Robin Hood’ Blossom comes through in a clutch once again! She’s such a good fighter, honestly, and it was sweet to see her trying to help Toni and the Serpents. This was a lovely episode for her.

— Jughead shouldn’t be leader of the Serpents. He shouldn’t be Serpent leader because he’s not a good leader in general, but mostly because he’s a teenage boy leading a criminal organization. That being said, he absolutely isn’t dead. Roberto and the team have made some weird choices with writing but they’re not that dumb.

— Hiram’s way too over the top as a villain. I thought there was going to be a shot of him stroking a white cat while Jughead tried to make a deal with him. He’s like a Bond villain except instead of fighting a grown man with strength and spy gadgets and losing, he’s a grown man fighting against a bunch of teenagers. He’s basically late-stage capitalism and mob violence fused into one man.

“Hot Riverdale dads to the rescue.” – Kevin (Not the time, buddy.)